Summit at the German-Brazilian research tower in the Amazon 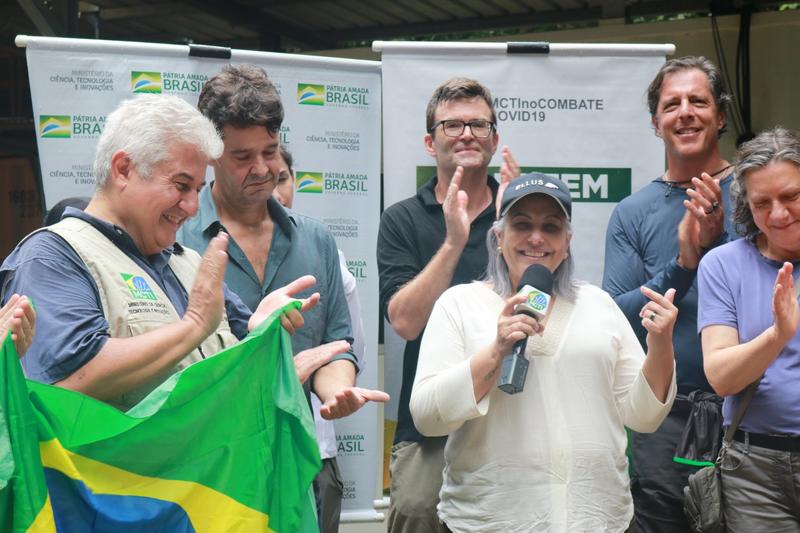 At the Amazon Tall Tower Observatory (ATTO), the research station of a joint German-Brazilian project in the Brazilian rainforest, scientists have been studying the ecosystems of the Amazon and their interactions with the atmosphere and climate for more than 10 years. Recently, representatives of the Brazilian Ministry of Research and foreign ambassadors visited the station. On site, Research Minister Pontes promised million-dollar investments in Amazon research and also in ATTO. This is intended to further expand the infrastructure and strengthen research in Brazil.

The Amazon Tall Tower Observatory is a large-scale research project funded by Germany and Brazil since 2010. At the unique research station in the Amazon rainforest, more than 200 scientists from all over the world are investigating how intact Amazon forests affect the regional and global climate, greenhouse gas balance and air quality, and how this will change as a result of global change. In addition to the German Max Planck Institutes for Biogeochemistry (MPI-BGC, Jena) and for Chemistry (MPIC, Mainz), the National Institute for Amazon Research (INPA) and the University of the State of Amazonas (UEA) are lead Brazilian partners in the project.

In early February, the Brazilian Minister of Science, Innovation and Technology Marcos Pontes paid a visit to the station. He was accompanied, among others, by the German Ambassador to Brazil, Heiko Thoms. The politicians were enthusiastic about the modern research site in the middle of the remote rainforest.

On site, Minister Pontes announced the investment of 80 million Brazilian reals (approx. 15 million euros) for the construction of laboratories in the Amazon region, also at ATTO. In addition, Brazil plans to invest in ATTO infrastructure and has announced a grant program for Brazilian researchers whose projects focus on soil-climate-rainforest interactions. The program is intended to facilitate access to ATTO for scientists from Brazil and, among other things, to further strengthen cooperation with colleagues from Germany.

This Brazilian funding commitment comes just a few months after the German Federal Ministry of Education and Research (BMBF) and the Max Planck Society approved funding for the next ATTO research phase. With the support from both countries, the project scientists* can now continue and further expand their joint research.

"The Brazilian government has supported our bilateral project from the very beginning," says Prof. Susan Trumbore, scientific coordinator of ATTO in Germany and director at the MPI-BGC in Jena. She flew to Brazil herself to join Brazilian coordinator Carlos Alberto Quesada in welcoming the important visit at the ATTO station.

"The MCTI's new funding commitment to science is wonderful. I am especially pleased because the funds will support young Brazilian researchers in particular. This ensures that funding from Germany and Brazil for ATTO will continue to be balanced in the future," adds Susan Trumbore.

Meteorologist Stefan Wolff from the Max Planck Institute for Chemistry has accompanied the ATTO project on site from the very beginning. During the politicians' visit, he shed light on more than a decade of history and explained the site's infrastructure. "It's great to see how ATTO has grown, developed and gained national and international recognition. We still have many plans that we want to realize in the next few years with the support from Germany and Brazil," said Wolff, who lives and conducts research in Brazil as the German representative of MPIC.

With the use of the research station, the team of scientists is studying the complex interactions between the largest tropical forest on Earth and the atmosphere in a time of climate change and weather extremes. Since the start of continuous data collection in 2011, the ATTO project has filled a gap in global observing networks with long-term climatic, biogeochemical and atmospheric measurements. With targeted studies on exchange processes, the researchers complement the long-term measurements and thus attempt to explain the causes of the annual fluctuations in the exchange of energy, water and greenhouse gases between the forest and the atmosphere.

Background of the project
The Amazon Tall Tower Observatory is located about 150 km northeast of Manaus in the Uatumã Sustainable Development Reserve. The research station comprises three measurement towers, several experimental plots and laboratory containers. The largest of these towers, at 325 m, is the tallest research tower in South America and allows unique observations of near-surface atmospheric fluxes and the incorporation of the greenhouse gas balance of intact forests.

Wissenschaftlicher Ansprechpartner:
Contact at the MPI for Biogeochemistry (MPI-BGC) in Jena, Germany

Contact at the MPI for Chemistry (MPIC) in Mainz