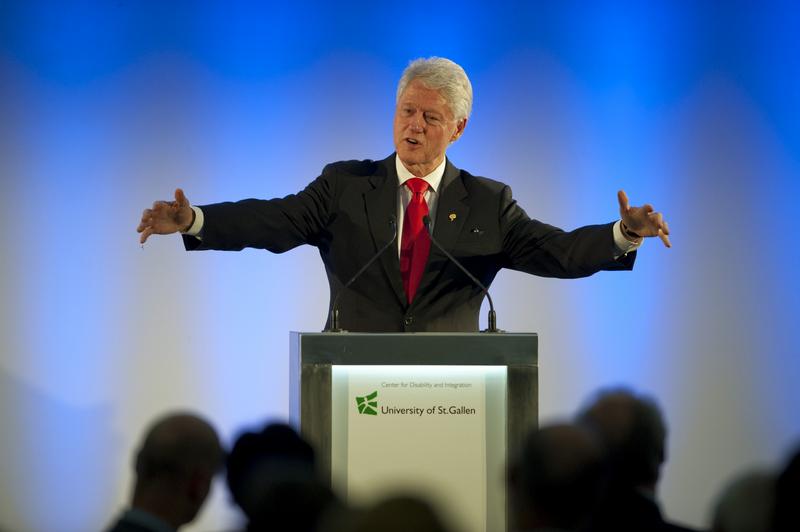 The Center for Disability and Integration (CDI-HSG) at the University of St.Gallen (HSG), Switzerland, was opened today with an event which calls on all sectors of society, and particularly companies, to take on the challenging but economically competitive step of employing more people with disabilities.

In his capacity as patron of the MyHandicap Foundation, which gave a private donation to establish the CDI-HSG, President Bill Clinton said that the work of the newly-formed Center will be very important to improve the lives of people with disabilities, both in Switzerland and in Europe, to shift from a system of helplessness to empowerment.

"The establishment of this centre reflects two very large developments that are going on in society today. The first is to attempt to empower the disabled, the second is the ability to do it through the rise of non-governmental organizations," he said, referring to the donation of MyHandicap Foundation to fund the Center, and to the conviction of the Clinton Global Initiative (CGI) that the most urgent political and societal problems can only be solved jointly by governments, the private sector and non-government organizations.

"We have a lot to learn from brave people with disabilities...it is a form of unconscionable arrogance to consign people, whose disabilities are more physically obvious than others, to be anything less than they can be. This Centre is designed to change that," he said.

At the event, attended by high profile representatives from academia, trade, industry and politics, CDI-HSG announced its initiative "Commitment to Action: Providing Opportunities for People with Disabilities", where companies will be awarded for Best Practice and Best Ideas in the area of integrating people with disabilities into the workforce. Such an initiative aims to meet not only the human need and desire to work, but also to lessen the fiscal responsibility of disability pensions on the taxpayer.

In 2004, total spending on disability benefits alone corresponded to one per cent of GDP in all OECD countries (UK: 1.5 per cent). This is a huge commitment of resources -- almost three times higher than, for instance, countries' commitment to unemployment benefits. Despite this, the economic and social implications of disability allowance payments, and the integration and re-integration of people with disabilities into the labour force, have been mostly overlooked by university research in the past.

The foundation of CDI-HSG was made possible through a generous donation of a German internet entrepreneur who lost his right arm and leg in a motorcycle accident, Joachim Schoss, who is also the Founder and President of Foundation MyHandicap.

Schoss supports the "Commitment to Action" initiative. He said that people with disabilities are valuable employees and that there are hard economic reasons as to why to employ them.

"The integration of people with disabilities into the workforce makes economic sense and there is plenty of evidence that, for the person affected, it is extremely positive for him or her. The reality is that we now need to convince employers so that they, too, can see how they can benefit from employing people with disabilities," he said.

German retail company, Metro Group, which has a diverse portfolio of retail companies, including hypermarkets in Europe, Africa and Asia, employs people with serious disabilities, saying that a corporate culture of diversity is central to this success factor.

Metro Group Chief Human Resource Officer, Chief Information Officer and Board Member, Zygmunt Mierdorf, who was present at the opening, said that for any organization to remain competitive in the long-term it has to harness all forces in society, which also means giving people with disabilities work opportunities.

"People with disabilities want one thing above all else, to be integrated, so that they are able to deliver whatever they are able to. For this purpose, barriers must be removed -- spatial and technical ones -- but also mental ones. To this end, managers, employees and works councils are systematically trained and prepared for the employment and integration of people with disabilities," Mierdorf said.

Director of CDI-HSG, Stephan Boehm, emphasized not only the advantage of being employed for people with disabilities, but also highlighted the positive effects for companies.

"By promoting integration in the areas of leadership, organizational culture, and human resource management, companies are able to enhance not only the productivity of employees with disabilities, but of their entire workforce and, therefore, gain an enduring competitive advantage," he said.

Center for Disability and Integration (CDI-HSG)
CDI-HSG: In March 2009, the Center for Disability and Integration (CDI-HSG) started its activities at the University of St.Gallen. The CDI-HSG is an interdisciplinary research center in which management experts, economists and psychologists jointly attempt to drive forward the economic and social integration of people with disabilities to lasting effect. The establishment of the new center was made possible through a private donation by the MyHandicap Foundation.

MyHandicap Foundation
MyHandicap is a charitable foundation that aims to improve the life situation of people whose everyday lives are substantially affected by a physical disability or a serious chronic illness. This is done by means of extensive information and advice on all areas of disabled people's daily lives and is meant to enable those concerned to live largely autonomous lives. With the internet platform www.myhandicap.com, MyHandicap created a virtual contact office where those directly and indirectly affected can obtain advice and information both quickly and in an uncomplicated manner. Here, people with disabilities have been meeting each other in an open, independent and positive environment for many years, and it is here where they can find motivation and suggestions for a self-determined life.

University of St.Gallen (HSG)
Internationality, practical relevance and an integrative perspective have been the trademarks of education at the University of St.Gallen in Switzerland ever since it was established more than a century ago. Today, the University of St.Gallen (HSG) educates 6,500 students from 79 nations in the fields of Business Administration, Economics, Law and Social Sciences. The HSG has shown itself to be highly successful, having been consistently ranked among Europe's leading business universities (Financial Times Ranking 2008: 1st place in German-speaking Europe). Its holistic education, which meets the highest academic standards, has earned it the seal of approval of the EQUIS and AACSB accreditations. Academic degrees can be obtained at the Bachelor's, Master's and Doctoral Levels. In addition, the University of St.Gallen offers first-class and comprehensive courses in Executive Education. Thanks to an increasing number of programmes taught in English, the HSG has shown itself to be attractive to international students. The focal points of research at the University of St.Gallen are crystallized in its 40 institutes and research centers, which constitute an integral part of the University. The institutes, which are largely autonomous and mostly self-financing, still remain closely connected to university operations.