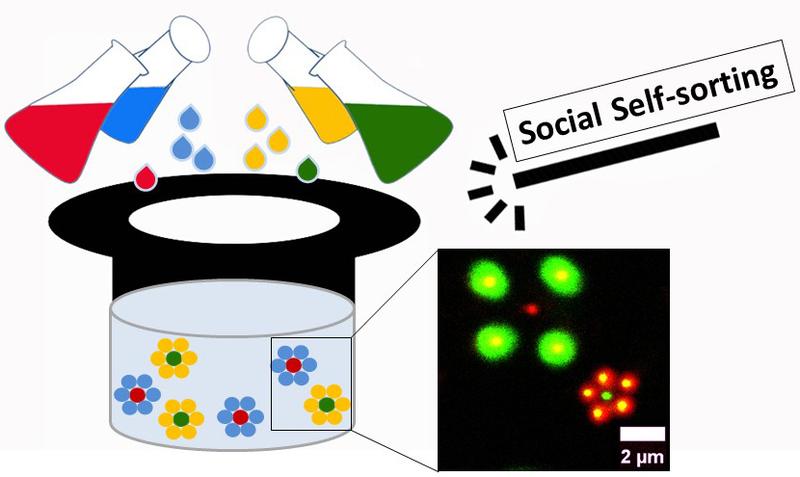 A plant or an animal cell uses numerous processes to sort and assemble tiny building blocks into larger molecules, to rebuild molecules or to dissolve them. Using synthetic gel particles, scientists try to simulate these cellular procedures; however, mimicking the complexity of natural processes presents a formidable task for scientists. Researchers from the DWI – Leibniz Institute for Interactive Materials in Aachen and the University of Freiburg now developed a set of four different, micrometer-sized building blocks, which can self-sort and co-assemble into defined compositions and disassemble at the push of a button.

A set of blue, red, green and yellow Lego bricks helps to visualize this research approach. It is very simple to build a multicolored object from these bricks, without considering the colors of the single bricks. To make it slightly more complicated, one could initially sort the bricks by their color and then build objects that are either blue, red, green or yellow. Such processes are referred to as ‘unsocial assemblies’ if they are driven by themselves. To make things even more complex, you could also build some objects from red and blue bricks and others from green and yellow bricks. These processes, if running simultaneously, are termed ‘social assemblies’.

The scientists from Aachen and Freiburg solved a similar task; however on a microscopic scale by using small gel particles instead of Lego bricks. These so-called microgels are water-rich, sponge-like gel particles, which can be chemically modified. “We used four different types of microgels for our experiments. The microgels can self-assemble in an ‘unsocial’ manner, staying amongst themselves, or co-assemble in a ‘social’ manner, with a second type of microgel,” explains Dr. Alexander Kühne from DWI. He coordinated this project together with Prof. Dr. Andreas Walther, a former DWI scientist who recently moved to the University of Freiburg.

The challenge of this project was to enable the microgels to distinguish between right and wrong partners. To achieve this, the scientists integrated molecular interactions so that only specific types of microgels would interact with each other – just like a key, which can only open a very specific lock. However, instead of keys and locks, the researchers applied switchable molecules that integrate into cyclic sugar moieties. Triggered by certain chemical conditions or by light the researchers could control the molecular shape and their interactions during the experiment. This way, the microgels can self-sort, self-assemble and disassemble at the push of a button.

“We use these types of experiments to get a better understanding of processes running in natural cells,” says Alexander Kühne. “In addition, progress in this field of research will eventually help us to develop biologically inspired, interactive materials.”