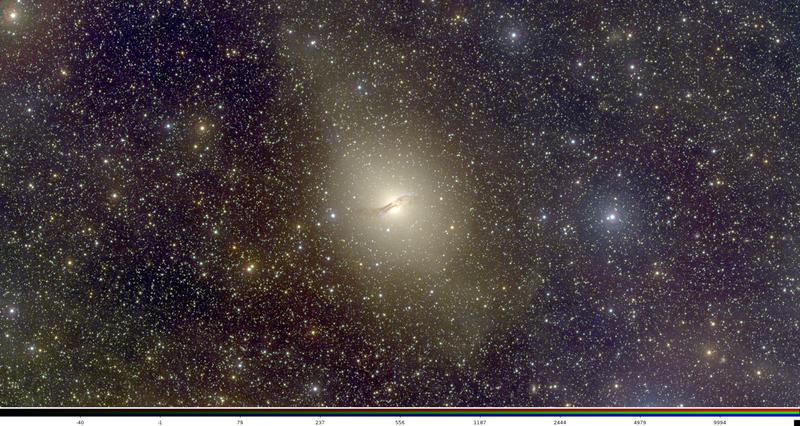 Astronomers have examined the distribution and movement of dwarf galaxies in the constellation Centaurus, but their observations do not fit with the standard model of cosmology that assumes the existence of dark matter. The international team of researchers led by the University of Basel reported their findings in the journal Science.

Like other large galaxies, our Milky Way is surrounded by smaller galaxies that orbit it as satellites. According to the standard model of cosmology that describes the formation of galaxies, these satellite galaxies should be distributed randomly and should orbit the host galaxy in an unordered way. The standard model assumes that all galaxies consist mainly of invisible dark matter, which has not yet been directly detected.

Observations of the Milky Way and the Andromeda galaxy, however, challenge this model: a few years ago, astronomers discovered that satellite galaxies are arranged in disc-shaped planes around the host galaxy and co-rotate within such planes.

Advocates of the standard model interpreted these structures as isolated cases. However, new findings by researchers led by Oliver Müller from the University of Basel’s Department of Physics now suggest that these are not statistical outliers, but are part of a widespread phenomenon.

Orderly movement within a plane

The researchers analyzed the movement of satellite galaxies around Centaurus A, a galaxy around 13 million light years away. The satellites are arranged on a plane that is perpendicular to the parent galaxy. This plane is oriented at a favorable angle to Earth, so the Doppler effect of the starlight can be used to determine the movement of the objects.

The researchers were thus able to show that 14 of the 16 satellite galaxies follow the same pattern of movement and are likely rotating within the plane around the main galaxy. According to model simulations with dark matter, however, only half a percent of satellite systems in the local universe at most should behave this way.

Challenge to the standard model

“Coherent movement seems to be a universal phenomenon that demands new explanations,” says Oliver Müller. The astronomical observations challenge the simulations. The possibility of coincidence can be ruled out, as this result – already seen in the Milky Way and the Andromeda galaxy – has now been detected a third time, in Centaurus A.

The standard cosmological model cannot explain the development of such structures; on the contrary, the results strengthen the supposition that satellite galaxies form during the collision of two larger galaxies, out of small debris ejected by tidal forces, as the astronomers write in the journal Science.