Neurological disease in mice and humans linked to an unlikely gene 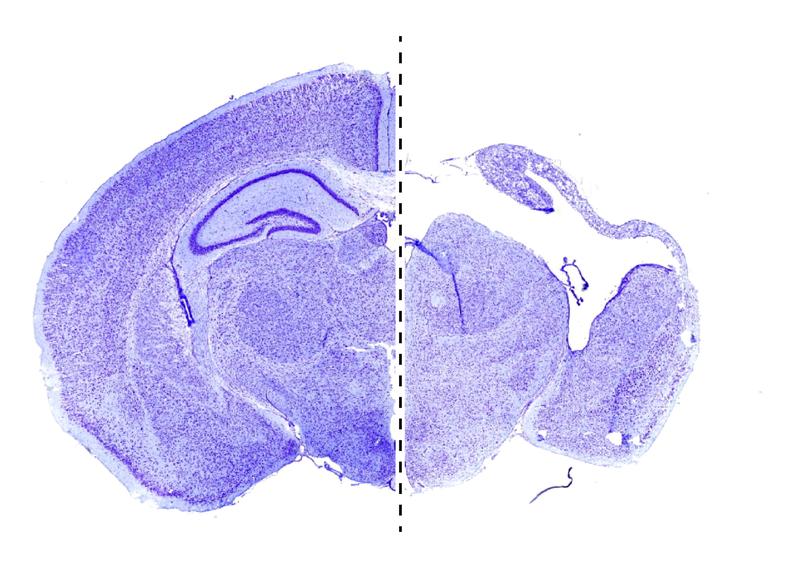 Composition of two mouse brain sections: left the brain of a healthy, juvenile mouse, right the equivalent without Vps15. Scientists linked this gene to defects in brain development in | Quelle: IMP | Download

Screening for mutations influencing the migration of nerve cells in mice, scientists found a gene that plays a role in the transport of proteins within nerve cells. If less of the protein is present in the developing mouse, the scientists found that its brain showed severe defects. Investigating the situation in humans, they discovered that a mutation of the same gene underlies neural degeneration.

A database tool designed to link molecular biologists and clinical geneticists built the crucial bridge between laboratory and patient: a young man from an Eastern European country, suffering from the effects of a specific mutation as the only one among four siblings; degenerated nerves and brain, cognitive defects, spasticity, limits in his capacity to respond to stimuli or control his muscles and epilepsy are among a long list of symptoms that characterised his condition. He passed away at the age of 19.

For the scientists in the lab of David Keays at the Research Institute of Molecular Pathology (IMP) in Vienna, finding this patient was the last piece in a puzzle. Long before they reached out to clinical geneticists, they had started to screen mice for mutations with an impact on neural migration.

Developing vertebrate brains crucially depend on the correct generation, migration, differentiation and survival of nerve cells. All of these are processes that require the orchestration of a high number of genes and their corresponding proteins, each of which can be disrupted in their normal role by mutations. Using biochemical methods to induce mutations, the scientists identified Vps15 as one genes that was required for normal neuronal development, as they reported now in the journal Nature Neuroscience.

“It was an unlikely candidate”, says Thomas Gstrein, first author of the paper. “There are more than 20,000 genes in humans.... no-one would have guessed that Vps15 was the culprit. You simply cannot make a brain without Vps15”.

It was only through the broad screen – performed by collaborators at the University of Oxford - that the scientists picked up on this particular gene.

Subsequently, they characterized the brain development defects caused by the mutation in mice and studied the molecular mechanisms that involve Vps15 in the developing brain in detail – linking it to other proteins that play key roles in the organisation of the cytoskeleton. Once these mechanisms were understood, they turned to Genematcher, an interface that linked them to clinical geneticists and a patient with a mutation in the human homolog of Vps15 – the teenager with the neurodegenerative condition.

An examination of parents, siblings and the patient himself confirmed that the mutation in VPS15 – reducing the amount of the relevant protein in the brain – was indeed the cause of the observed neurodevelopmental defects. In concluding their paper, the scientists point out that VPS15 may also play a role in other neurological conditions such as schizophrenia or autism – it calls for a closer look in future studies.

About the IMP
The Research Institute of Molecular Pathology (IMP) in Vienna pursues world-class research in basic molecular biology. It is located at the Vienna BioCenter and largely sponsored by Boehringer Ingelheim. With over 200 scientists from 40 countries, the IMP is committed to scientific discovery of fundamental molecular and cellular mechanisms underlying complex biological phenomena. www.imp.ac.at

About Vienna BioCenter
Vienna BioCenter (VBC) is a leading life sciences hub in Europe, offering an extraordinary combination of research, business and education in a single location. About 1,700 employees, 86 research groups, 18 biotech companies, 1,300 students and scientists from 70 nations create a highly dynamic and stimulating environment. www.viennabiocenter.org