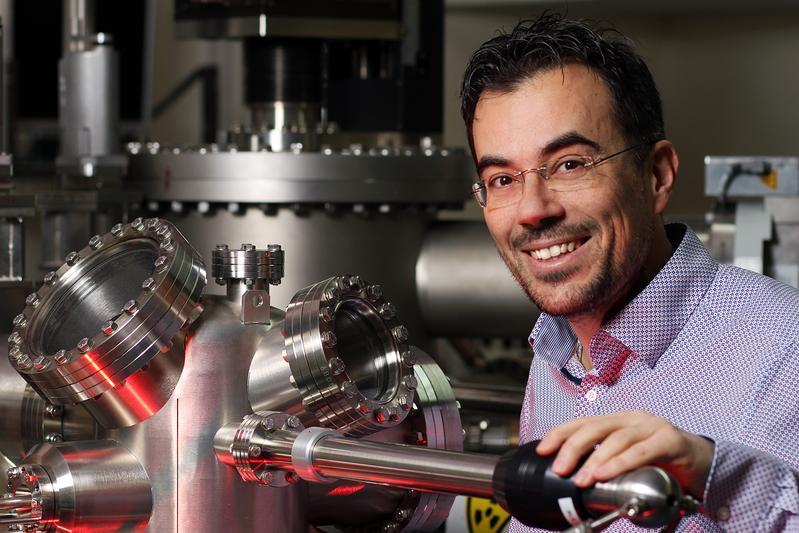 Terahertz waves are often used in the checking of passengers and luggage at the airport. They are also in demand in other areas, such as for materials testing in the industry. Physicists at the University of Kaiserslautern (TUK) have now developed a new method for generating such waves. They use a quantum magnetic current flow, so-called spin current, in magnetic metal nanostructures. The cost-effective and material-saving technology has the potential for industry applications. The study was published in the renowned scientific journal "Scientific Reports".

Terahertz (THz) waves lie in the electromagnetic spectrum between microwaves and infrared radiation. They are invisible to the human eye. Since they are low in energy, there is no need for be concerned with their impact on human. Today, they play a role in medical and communications technology, but also in materials testing. For example, they were used to inspect the plastic insulation on space shuttle. However, powerful radiation sources, i.e. emitters, are needed to generate the waves. This is usually associated with high energy consumption and costs.

A very efficient and at the same time more cost-effective method has now been developed by Kaiserslautern researchers, in which they use a so-called spin current. This is analogous to the electric current, in which electrical charges, namely electrons, flow. "A spin describes the intrinsic angular momentum of a quasiparticle, such as an electron," says Associate Professor Dr. Evangelos Papaioannou, who is a researcher with his own sub-group in the Magnetism Research Group lead by Professor Burkard Hillebrands in Department of Physics at TUK. "It forms the basis for all magnetic phenomena. Simply said, an electron rotates left or right around its axis like a spinning top."

A special nanostructure has been developed by the research team of Papaioannou for the application of the technique. "It consists of a metal bilayer of magnetic iron and non-magnetic platinum," as the physicist describes the structure. "These are very thin layers that are only a few nanometers thick."

To generate the terahertz waves, the researchers use a femtosecond laser that emits extremely short laser pulses. As a result, the following happens: "When the laser pulses hit the nanostructure they stimulate the electrons in the iron film, creating a spin current," says the Papaioannou. This current flows into the adjacent platinum layer. Here comes a certain physical phenomenon into play, the inverse Spin-Hall Effect. For platinum, this effect has been known for some time. It arises due to the atomic structure of the metal. "The atomic nuclei of platinum deflect electrons with a left- and right-handed spin in opposite directions, which leads to the transformation of the spin current into an ultrafast transient charge current, which is then the source of terahertz waves”.

As a special feature of the experimental setup, a small silicon lens is attached to the structure. "We are bundling the waves", the Junior Professor continues. In this way, the terahertz waves could be forwarded easily and efficiently in future applications.

In their recently published paper, the researchers have revealed, among other things, how layer thicknesses and the arrangement of materials must be best designed to produce the THz waves. The research field of THz spintronics technology is an emerging field. Only recently, research colleagues in Berlin showed for the first time that terahertz waves can be generated by spin current. The work of the Kaiserslautern researchers reveals now a way to optimize the emitters so that they can reach their maximum efficiency. This makes them cheaper and more interesting for various fields of application, for example for security techniques, materials testing and information technologies, but also for basic research.

The team of Papaioannou is a part of the State Research Center for Optics and Material Sciences (OPTIMAS), which is funded by the state of Rhineland-Palatinate. Professor R. Beigang and Dr. G. Torosyan also contributed to the study, both are experts in the field of Terahertz. The work was supported by the Deutsche Forschungsgemeinschaft within the scope of the Collaborative Research Center SPIN + X, as well as the Carl-Zeiss Foundation.