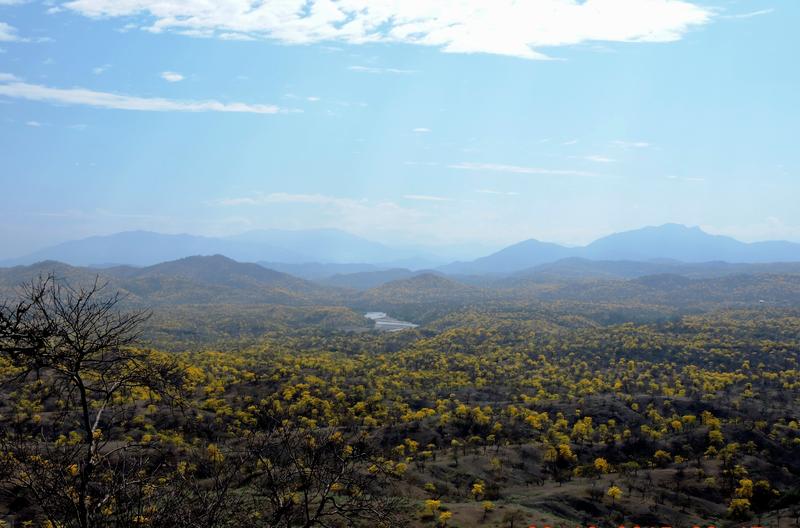 Most of Ecuador's dry forests are located in the southwest of the country, in the Tumbes-Chocó-Magdalena region. | Quelle: Photo: P. Hildebrandt/ TUM

Tropical forests all over the world are at risk. Two of the main threats are the deforestation for arable land and climate change. Scientists from the Technical University of Munich (TUM) and the Thünen-Institute compared the losses due to deforestation with those that would result in extreme climate change scenarios in Ecuador. Although global warming is likely to change the distribution of species, deforestation will result in the loss of more dry forests than predicted by climate change damage.

A large proportion of Ecuador's rare dry forests are located in the southwest of the country, in the Tumbes-Chocó-Magdalena region. These forests provide not only wood and non-wood products, but also important ecosystem services that regulate the water balance and protect the soil from erosion. However, the area suffers a high loss of habitat due to deforestation for more arable and pasture land. This exacerbates the negative effects of climate change, such as temperature increases.

In cooperation with scientists from the Thünen-Institut and the Ecuadorian Universidad Técnica Particular de Loja, a team from TUM compared the predicted loss of area of tree species caused by deforestation on the one hand and by predicted forest losses in an extreme climate change scenario on the other. We have evaluated 660 data sets on the occurrence of 17 characteristic species of dry forests in the south of Ecuador," explain first author Carlos Manchego and Patrick Hildebrandt from the Chair of Silviculture at TUM - "in order to estimate both potential threats, we have compared the forecast annual rates of losses. However, it is important that the results are not transferable to other tree species in other regions."

Recommendations for more effective forest protection and sustainable land use

One unexpected outcome was the different displacement directions of tree species due to climate change. While some species migrate to the north, other species find their future distribution focus more to the south. This leads to a trend towards mixing tree species with hitherto unknown effects on the functionality and stability of future forest communities," says Hildebrandt. "At the same time, grubbing-up starts in the higher altitudes, because it's easier to grow something like corn there."

According to Hildebrandt, it is important for efficient planning, the implementation of protective measures and sustainable land use to prioritise the measures according to such threats and weak points. A distinction must be made between the potential threats posed by climate change and deforestation. With the study "PLOS One" we wanted to provide a scientific frame of reference to identify the lesser evil and make targeted recommendations".

However, regardless of the conservation strategy, these objectives required the participation of both private landowners and local communities.