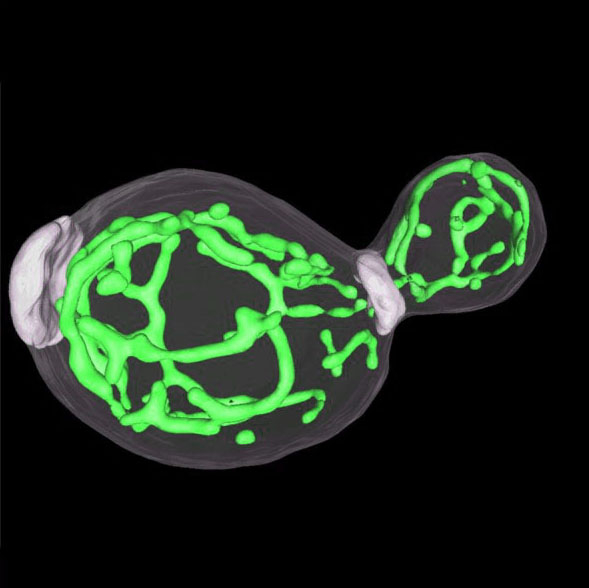 3D-structure of mitochondria in a budding yeast cell. Labeling with a green fluorescent protein shows that mitochondria form a tight tubular network in the cell. | Quelle: Source: Stefan Jakobs | Download

Mitochondria, best known for their role as cellular power plants, perform numerous vital tasks in the cell. During cell respiration, reactive oxygen species can be formed in mitochondria. If these are present in excess, their high reactivity leads to irreparable damage to important cellular components. This so-called oxidative stress is assumed to play a causal role in many diseases and in ageing processes. In low concentrations, however, reactive oxygen species can also act as important second messengers in the cell. Here, specific, so-called redox-active thiols in distinct proteins are modified. This type of oxidative modification is reversible and, like a nano-switch, can regulate the function of a protein.

A German-Polish research team led by Prof. Dr. Bettina Warscheid from the University of Freiburg and Prof. Dr. Agnieszka Chacinska from the Centre of New Technologies in Warsaw/Poland has discovered a new mechanism that enables mitochondria with impaired redox balance to regulate the synthesis of new proteins in the cytoplasm. The mitochondria use reactive oxygen species as signal to slow down the cellular protein synthesis machinery. The study was published in the current issue of the scientific journal "Nature Communications".

Using quantitative mass spectrometry, Dr. Ida Suppanz from Warscheid's research group first determined the redox state of thiols in thousands of proteins of the baker's yeast Saccharomyces cerevisiae. She discovered so far unknown redox-active thiols in components of the ribosomes at which new proteins are synthesized.

Dr. Ulrike Topf from Chacinska’s group observed that increased levels of reactive oxygen species inhibit protein synthesis. Using biochemical and cell biological methods, she showed that damaged mitochondria can signal their metabolic state to the protein synthesis machinery via reactive oxygen species and, thereby, slow down cellular protein synthesis. It is assumed that the temporary reduction of the protein synthesis rate under oxidative stress has a positive effect on the survival of the cells as it is believed to help to restore cellular homeostasis. This also prevents the cell from synthesizing proteins that cannot be taken up by damaged mitochondria, which, as a consequence, accumulate in the cytoplasm and thus need to be degraded. Researches of Warscheid’s and Chacinska’s teams explained how the cell reacts to such a protein accumulation in 2015 in the journal "Nature" (press release: www.pr.uni-freiburg.de/pm-en/2015/pm.2015-08-13.119-en).

Furthermore, the researchers were able to show that this newly discovered regulatory mechanism does not only exist in yeast, but also in human cells. Knowledge on how dysfunctional mitochondria communicate with other cellular components can help to elucidate the mechanisms of age-related and neurodegenerative diseases in the future.

Bettina Warscheid is head of the department of Biochemistry - Functional Proteomics, Institute of Biology II, and member of the Excellence Cluster BIOSS Centre for Biological Signalling Studies at the University of Freiburg. Ida Suppanz is a postdoctoral fellow in the group of Bettina Warscheid.