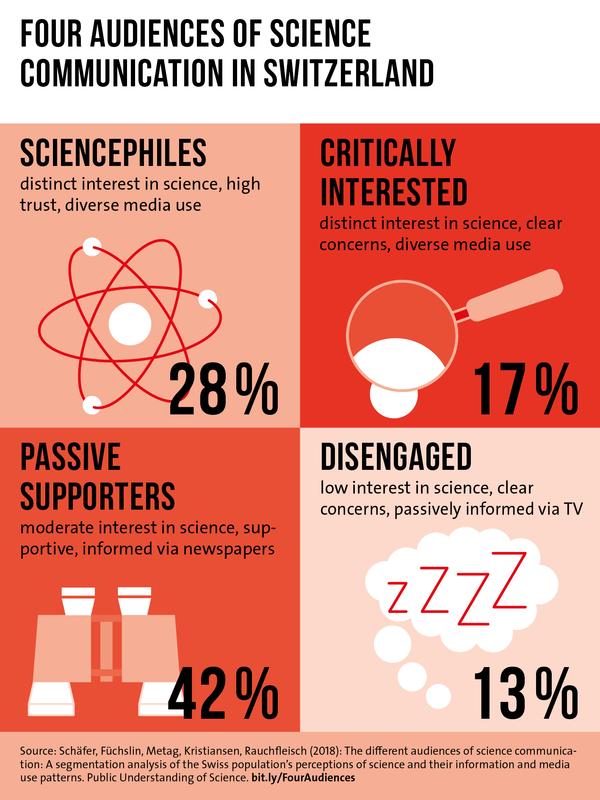 When it comes to attitudes toward science and research, Swiss people fall into four distinct categories ranging from enthusiasts (28 percent) to completely uninterested (13 percent). Despite many differences between them, people in all categories support the promotion of science and research, reveals a study by the universities of Zurich and Fribourg.

The Science Barometer Switzerland published in 2016 showed a clear picture: Swiss people are interested in science and research, and think they are worth supporting. “This main finding doesn’t mean, however, that all Swiss people have the same attitude toward science. A differentiated picture emerges by dividing the population into groups,” explains Julia Metag, professor at the University of Fribourg. She and a team of four researchers have reconstructed these groups in a newly published study and have discovered four types of Swiss people with differing attitudes toward science.

Two of these types are very interested in science. The most interested, the “Sciencephiles,” say science plays an important role in their life. They are convinced not only that knowledge is very useful, but also that it can and will solve many problems. The “Sciencephiles” make up around 28 percent of the population, are mostly male, aged on average 47, and have a high level of education. The second group (17 percent) are also very interested in science, but take a more critical position. The “Critically Interested” think that clear research constraints and boundaries need to be established in science due to the accompanying moral and ethical issues. But despite their skepticism, they are still more strongly in favor of providing public support for science than the average Swiss person.

Nearly 42 percent of the population belong to the largest group: the “Passive Supporters”. These types of people generally trust science and think that, on the whole, it improves our lives. However, they are not particularly interested in finding out more about science, let alone taking part in a citizen science project. The majority of this group are female and their average age is 46.

The least common type – only around 13 percent of the population – are the “Disengaged.” Science virtually doesn’t play any role in their lives and therefore they do not think that there is any need to be informed about scientific matters. Their trust in science is the lowest of all types, and they also think that society relies too heavily on scientific research. Accordingly, this group are least in favor of public support for science and research. However, they do not actively believe it should not be supported, but rather are neutral about supporting it. Women also make up the majority of this group, and their average age is 45.

“We constructed these types by looking at people’s attitudes towards science and research. However, if we look at media consumption, we can also see systematic differences between the types,” explains Tobias Füchslin, communications researcher at UZH.

The differences are the most clear cut in the variety of media channels used by the different types. The two types with the most interest in science – “Sciencephiles” and “Critically Interested” – use many channels and come into contact with science through television, radio, and newspapers. But more often they use the internet and actively inform themselves via Wikipedia and scientific websites. The “Disengaged,” however, hardly ever come into contact with science through their media consumption. With one exception: the radio and TV programs offered by the SRF reach this group just as often as the other three types.

Background to the project

The long-term project “Science Barometer Switzerland” examines what Swiss people think about scientific matters, and how various information sources from mass media, to social media such as Facebook and Twitter, and family and friends influence people’s perception of and trust in science.

A representative telephone survey of the Swiss population is undertaken every three years in order to understand the changing climate of science communication and its audience. In 2016, 1,051 people were questioned – 651 in German-speaking Switzerland, 200 in western Switzerland, and 200 in Ticino.