Scientists investigate the molecular basis of social evolution in Termites 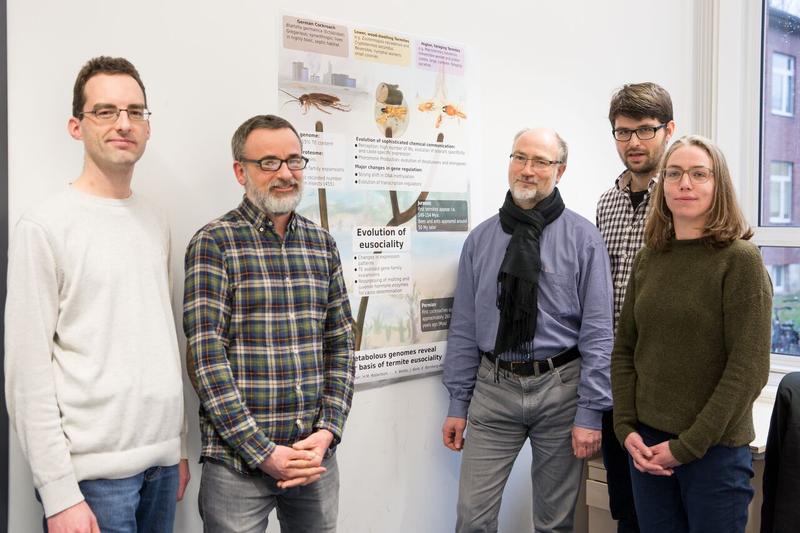 Scientists have now, for the first time, compared the molecular basis for the evolution of eusociality within termites and ants. They proved similar processes involved in the formation of these insect societies. Researchers from 11 research institutions in 6 countries participated in this study.

One phenomenon that fascinated Charles Darwin and many other researchers since, is the emergence of huge, complex insect societies. Even more exciting is that the societies of termites and ants evolved independently from each other. Although unrelated, termites and ants are very similar: They both have a so-called “eusocial” way of living. This includes distinctive features such as the creation of reproductive castes (queens and workers) or a complex system of division of labour among workers. These castes also include morphologically quite different workers and soldiers. However, termites and ants are not closely related. While termites first emerged around 150 million years from within the cockroaches, ants and other eusocial Hymenoptera (e.g. bees and wasps) appeared 50 million years later on a very distant branch of the insect family tree. Scientists from the group of bioinformatician Prof. Erich Bornberg-Bauer from the University of Münster and evolutionary biologist Prof. Judith Korb from the University of Freiburg have now, for the first time, compared the molecular basis for the evolution of eusociality within both groups. The study has been published in the scientific journal “Nature Ecology and Evolution”.

All the important information for the blueprint and behaviour of an organism is contained in its genome. Therefore, by comparing genomes valuable information can be obtained to help explain how millions of years of evolution have generated remarkably complex organisms. In this way the researchers, among other findings, uncovered distinctive genetic features in the genomic regions which encode chemoreceptors – proteins involved in chemical communication.

“Compared to the closely related cockroaches, the involved protein families are strongly reduced but at the same time strongly diverged in their function, underlining their importance,” Erich Bornberg-Bauer points out. Chemical communication via pheromones enables members of insect societies to, for example, recognise nest mates and differentiate between castes. This form of communication is vital for the colony life of these animals.

On the surface, these results are surprisingly similar to findings from previous studies on the evolution of eusociality in bees and ants. However, further analyses by Bornberg-Bauer and colleagues revealed that in termites a related but clearly distinct family of chemoreceptors to the ants and bees had been specialised for the recognition of pheromones. “This is, therefore, a classic case of convergent evolution: Both groups evolved similar molecular mechanisms for a eusocial lifestyle under similar selection pressures,” says genomics expert Dr Mark Harrison, first author of the study. The scientists found evidence for further convergences, including genes that play a role in the synthesis of hydrocarbons in the cuticle, the hard shell of insects. These cuticular hydrocarbon signals may play an important role in communication as they contribute to a distinctive blend of aromas that have been linked to colony, caste and reproductive status.

In this study the scientists sequenced the first genome of a cockroach (German cockroach, Blattella germanica) and a drywood termite (Cryptotermes secundus). They compared the genomes, the genetic activity and the complete set of proteins (proteome) of three termite species with the cockroach. Moreover, they compared the results with corresponding data from 16 other insect species, including several ant species. With the help of specialised algorithms they reconstructed the genetic configuration of the ancestors of today’s termites. In this way they were able to retrace the appearance of random mutations that enabled the evolution of eusociality.

The international team of scientists discovered one of the most important causes of the genomic changes that supported these molecular adaptations to be so-called transposons. These are DNA regions that possess the ability to duplicate and change position within a genome ("jumping genes"). “We were able to deduce that, long before the evolution of termites, one particular class of transposons led to the expansion of gene families probably involved in communication,” added Dr Evelien Jongepier, also first author. These protein expansions have led to the cockroach possessing possibly the largest so far recorded insect proteome, and may also have facilitated the evolution of eusociality in the termites.

Scientists from 11 research institutions in 6 countries participated in this study, including researchers from the University of Freiburg, the University Pompeu Fabra in Barcelona, the University of Illinois at Urbana-Champaign, North Carolina State University, and scientists at the Baylor College of Medicine Human Genome Sequencing Center in Houston as part of the i5k project. The German scientists were financed by grants from the Deutsche Forschungsgemeinschaft.

Scientists distinguish different types of cohabitation and the formation of societies in the animal kingdom. The most complex form is “eusociality”, which comprises the coexistence of several generations within a single colony, cooperative brood care and the reproductive division of labour. This means that only one or a few individuals within a colony reproduce, for example, the queen and king termites, while other individuals are infertile.