Ozone at lower latitudes is not recovering, despite Antarctic ozone hole healing 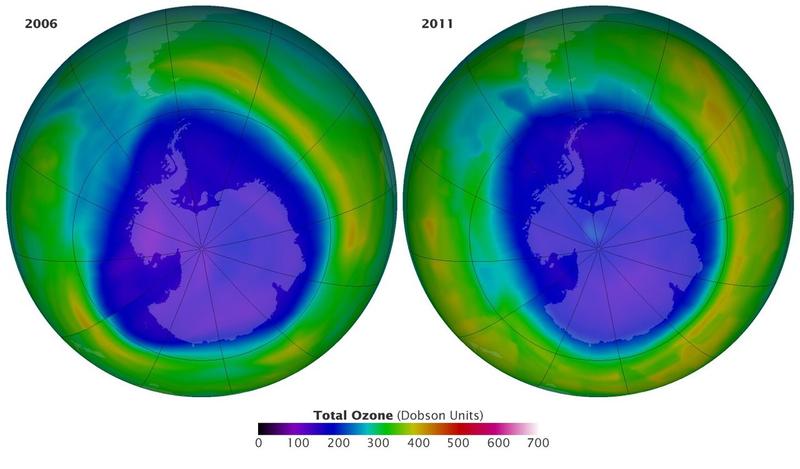 These images, not from the current study, show the Antarctic ozone ‘hole’ in September 2006 and 2011. They were made with data from the Ozone Monitoring Instrument on NASA’s Aura. | Quelle: NASA's Earth Observatory | Download

The ozone layer – which protects us from harmful ultraviolet radiation – is recovering at the poles, but unexpected decreases in part of the atmosphere may be preventing recovery at lower latitudes, new research has found. The new result, published today in the European Geosciences Union journal Atmospheric Chemistry and Physics, finds that the bottom part of the ozone layer at more populated latitudes is not recovering. The cause is currently unknown.

Ozone is a substance that forms in the stratosphere – the region of the atmosphere between about 10 and 50 km altitude, above the troposphere that we live in. It is produced in tropical latitudes and distributed around the globe. A large portion of the resulting ozone layer resides in the lower part of the stratosphere. The ozone layer absorbs much of the UV radiation from the Sun, which, if it reaches the Earth’s surface, can cause damage to DNA in plants, animals and humans.

In the 1970s, it was recognised that chemicals called CFCs, used for example in refrigeration and aerosols, were destroying ozone in the stratosphere. The effect was worst in the Antarctic, where an ozone ‘hole’ formed.

However, despite this success, scientists have today revealed that stratospheric ozone is likely not recovering at lower latitudes, between 60⁰N and 60⁰S (Berlin is at 52⁰N), due to unexpected decreases in ozone in the lower part of the stratosphere.

Study co-author Joanna Haigh, Co-Director of the Grantham Institute at Imperial College London, said: “Ozone has been declining globally since the 1980s, but while the banning of CFCs is leading to a recovery at the poles, the same does not appear to be true for the lower latitudes.

“The potential for harm in lower latitudes may actually be worse than at the poles. The decreases in ozone are less than we saw at the poles before the Montreal Protocol was enacted, but UV radiation is more intense in these regions and more people live there.”

The cause of this decline is not certain, although the authors suggest a couple of possibilities. One is that climate change is altering the pattern of atmospheric circulation, causing more ozone to be carried away from the tropics. The other possibility is that very short-lived substances (VSLSs), which contain chlorine and bromine, could be destroying ozone in the lower stratosphere. VSLSs include chemicals used as solvents, paint strippers, and as degreasing agents. One is even used in the production of an ozone-friendly replacement for CFCs.

William Ball from ETH Zurich and PMOD/WRC Davos, who led the analysis published in Atmospheric Chemistry and Physics, said: “The finding of declining low-latitude ozone is surprising, since our current best atmospheric circulation models do not predict this effect. Very short-lived substances could be the missing factor in these models.” It was thought that very short-lived substances would not persist long enough in the atmosphere to reach the height of the stratosphere and affect ozone, but more research may be needed.

To conduct the analysis, the team developed new algorithms to combine the efforts of multiple international teams that have worked to connect data from different satellite missions since 1985 and create a robust, long time series. “The study is an example of the concerted international effort to monitor and understand what is happening with the ozone layer; many people and organisations prepared the underlying data, without which the analysis would not have been possible,” Ball said.

Although individual datasets had previously hinted at a decline, the application of advanced merging techniques and time series analysis has revealed a longer term trend of ozone decrease in the stratosphere at lower altitudes and latitudes. The researchers say the focus now should be on getting more precise data on the ozone decline, and determining what the cause most likely is, for example by looking for the presence of VSLSs in the stratosphere.

Justin Alsing from the Flatiron Institute in New York, who took on a major role in developing and implementing the statistical technique used to combine the data, said: “This research was only possible because of a great deal of cross-disciplinary collaboration. My field is normally cosmology, but the technique we developed can be used in any science looking at complex datasets.”

The study was conducted by researchers from institutions in Switzerland, the UK, the USA, Sweden, Canada and Finland, and included data gathered by satellite missions including those by NASA.

Please mention the name of the publication (Atmospheric Chemistry and Physics) if reporting on this story and, if reporting online, include a link to the paper (https://doi.org/10.5194/acp-18-1379-2018) or to the journal website (https://www.atmospheric-chemistry-and-physics.net).

The research is presented in the paper ‘Evidence for a continuous decline in lower stratospheric ozone offsetting ozone layer recovery’ by William T. Ball et al. published in the EGU open access journal Atmospheric Chemistry and Physics on Tuesday 6 February 2018.

The scientific article is available online, free of charge, from the publication date onwards, at https://doi.org/10.5194/acp-18-1379-2018 (this URL will redirect to the final, peer-reviewed paper after it is published). A pre-print version of the final paper is available for download at https://www.egu.eu/news/384/ozone-at-lower-latitudes-is-not-recovering-despite-antarctic-ozone-hole-healing/ (scroll down to the Media section).

The European Geosciences Union (EGU, https://www.egu.eu) is Europe’s premier geosciences union, dedicated to the pursuit of excellence in the Earth, planetary, and space sciences for the benefit of humanity, worldwide. It is a non-profit interdisciplinary learned association of scientists founded in 2002. The EGU has a current portfolio of 17 diverse scientific journals, which use an innovative open access format, and organises a number of topical meetings, and education and outreach activities. Its annual General Assembly is the largest and most prominent European geosciences event, attracting over 13,000 scientists from all over the world. The meeting’s sessions cover a wide range of topics, including volcanology, planetary exploration, the Earth’s internal structure and atmosphere, climate, energy, and resources. The EGU 2018 General Assembly is taking place in Vienna, Austria, from 8 to 13 April 2018. For more information and press registration, please check http://media.egu.eu, or follow the EGU on Twitter and Facebook.

Atmospheric Chemistry and Physics (ACP, https://www.atmospheric-chemistry-and-physics.net/) is an international scientific journal dedicated to the publication and public discussion of high-quality studies investigating the Earth’s atmosphere and the underlying chemical and physical processes. It covers the altitude range from the land and ocean surface up to the turbopause, including the troposphere, stratosphere, and mesosphere.

If you wish to receive our press releases via email, please use the Press Release Subscription Form at http://www.egu.eu/news/subscribe/. Subscribed journalists and other members of the media receive EGU press releases under embargo (if applicable) at least 24 hours in advance of public dissemination.