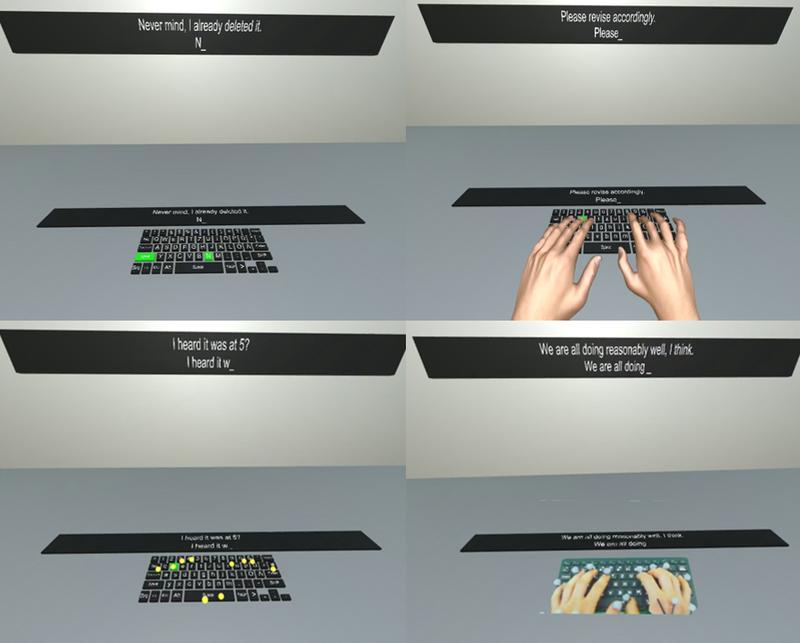 The representation of our hands has an effect on typing in VR. From upper left to bottom right: no hand representation, inverse kinematic model, fingertip visualization using spheres and video inlay.

We are typing on a daily base. Whether using a computer or smartphone – typing is one of the most important functions. Still, text entry remains a challenge for Virtual Reality (VR) applications and, so far, it is not well understood how typing on standard keyboards transfers into VR. Now, scientists from the universities of Coburg, Passau, Cambridge and from Microsoft have tested which models of hand representations would be the most suitable ones.

The team headed by Prof. Dr. Jens Grubert (Coburg University) tested in two studies, each with 24 participants, how the representation of our hands in VR affects typing. Second, they studied how fast one can type in VR. The researchers evaluated a total of 48 hours of typing behavior in VR.

In the first study, two variants were found to be particularly useful: fingertip visualization and video inlay, showing the person’s fingertips on the keyboard as dots. Both resulted in statistically significant lower text entry error rates. The other variants, to render the hands completely virtual, or instead to show only the touch effects on the keyboard, proved to be the more inappropriate ones.

The aim of the second study was to find out if and how Virtual Reality is changing ones typing behavior. It is proven that users are typing there more slowly. The participants were able to retain about 60% of their typing speed on a desktop keyboard and about 40-45% of their typing speed on a touchscreen virtual keyboard. It was indicated that users can transfer their typing skills fast into VR and that the position in which keyboards are rendered in space does not matter. Anyone who sees keyboard and text virtually in front while typing can physically move to another position, e.g. tap the table surface. This does not adversely affect performance for desktop keyboard typing and results only in moderate penalties on touchscreen keyboards.

The international research team will present its results at the IEEE VR 2018 conference in March.