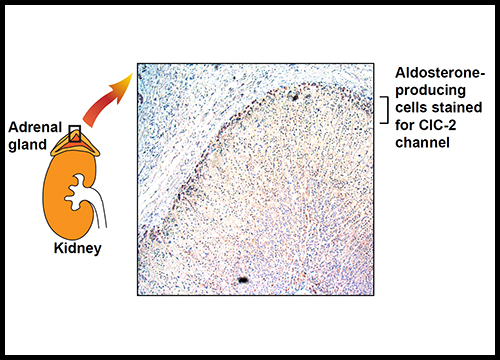 wenty-five years ago, an unusual inherited form of high blood pressure was first described in an Australian family. Its genetic cause, however, had remained elusive. Using modern sequencing methods, an international research team led by BIH Johanna Quandt Professor Ute Scholl has succeeded in detecting mutations in a new disease gene (CLCN2) – present in this family and seven others – that are responsible for the development of a familial form of hyperaldosteronism. The findings from this study have been published in the scientific journal Nature Genetics.

More than a billion people worldwide suffer from high blood pressure (hypertension). Prolonged hypertension damages blood vessels, which can result in damage to the heart, the kidneys, and the brain. Possible consequences include heart attack, kidney failure, and stroke. Besides obesity, salt consumption, and alcohol intake, genetic factors play an important role in the development of hypertension. In some rare cases, familial hypertension is caused by mutations within single genes. These genes play important roles in blood pressure determination, and mutations typically cause early-onset hypertension, even in young children and adolescents. Ute Scholl and a team of scientists from the United States and Australia have now identified a new hypertension disease gene. The study focused on a particular and very rare form of high blood pressure, known as familial hyperaldosteronism type II. This inherited disease causes the adrenal gland to produce too much aldosterone – a hormone that regulates how much salt and water the kidneys retain in the body. Too much of this hormone results in high blood pressure.

Familial hyperaldosteronism type II was first described in an Australian family 25 years ago. The research team investigated this family along with other patients suffering from hyperaldosteronism in childhood and adolescence. A total of eight families, including the large Australian family, showed mutations in a gene that had not previously been associated with blood pressure regulation. The CLCN2 gene carries information for building a channel in the cell membrane through which chloride ions can pass. In specific cells of the adrenal gland, these chloride channels regulate membrane voltage and aldosterone production. Gene mutations in patients with familial hyperaldosteronism cause changes in the membrane voltage and result in the overproduction of aldosterone, which raises blood pressure.

“Patients with suspected familial hyperaldosteronism and their relatives will benefit from our findings,” explains the study’s lead author Ute Scholl, “because in the future they can be screened for mutations in the CLCN2 gene.” Study patients also responded to medication that is already used in the treatment of hyperaldosteronism. “For families with familial hyperaldosteronism type II, identifying the genetic cause doesn’t just help with early detection of the disease, it also enables targeted treatment,” says Scholl. As BIH Johanna Quandt Professor, Ute Scholl and her research group will now use the results from the study to delve deeper into their research at the Berlin Institute of Health. “We plan to further investigate the role of chloride channels in the adrenal gland,” says Scholl. “We also try to better understand the regulation of these channels in order to develop improved treatment strategies.”

International collaborations led to the breakthrough

The publication in Nature Genetics* is the outcome of an international research collaboration. Michael Stowasser and Richard Gordon’s group at the University of Queensland in Australia identified and characterized the large Australian family. This made it possible for Ute Scholl’s group to pinpoint CLCN2 as the candidate gene. The researchers were then able to confirm their findings using a large cohort from Richard P. Lifton’s laboratory at the Yale School of Medicine in the United States. The electrophysiological work was conducted in Christoph Fahlke’s laboratory at Forschungszentrum Jülich.

Ute Scholl holds one of three BIH Johanna Quandt Professorships at the Berlin Institute of Health and Charité – Universitätsmedizin Berlin. This limited-term W2 professorship is funded by Stiftung Charité.