Fully exploiting the possibilities of Industrie 4.0 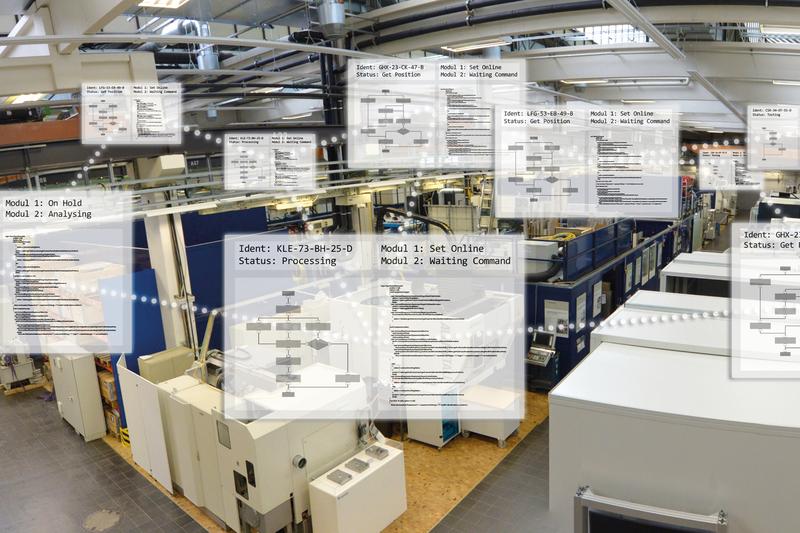 Researchers from three Aachen-based Fraunhofer Institutes are working together in the Fraunhofer High Performance Center for Networked, Adaptive Production to realize the complete connectivity of machines and sensors with the goal of evaluating all recorded production data with intelligent algorithms in real time and flexibly adapting processes accordingly. At the Hannover Messe Preview on February 6 and at the Hannover Messe proper from April 23 to 27, 2018, they will demonstrate what diagnostic and forecasting possibilities this yields for the manufacture of demanding products for various sectors.

Today, the individual processing of components or the optimization of manufacturing during the production process are often not feasible or only in part at best. But this is precisely what researchers from three Fraunhofer Institutes in Aachen want to achieve. They are developing a fully connected production environment which is suitable for different industrial sectors – from biomedicine to mechanical engineering. In the High Performance Center for Networked, Adaptive Production, they want to fully exploit the possibilities of Industrie 4.0 for particularly challenging production tasks and they will present according sample examples at the Hannover Messe.

“With our approach, we are bringing digitalization and connectivity into a real-life manufacturing environment,” says Thomas Bergs, Managing Director of the Fraunhofer Institute for Production Technology IPT in Aachen. “We fit out the production systems out with numerous sensors, which continuously transmit measurement data from the machines to a central database. Moreover, they send the data wirelessly, via 5th generation mobile networks (5G).” The collected data is stored in a specially developed cloud called Virtual Fort Knox and processed and analyzed there with specially designed algorithms and technology apps. This analysis helps to unreval new and surprising correlations, such as vibration patterns which indicate that the tool in a milling machine is worn. When the information is then fed back to the machine control unit, the circle closes: for example, with a warning that the tool has to be replaced.

To illustrate the various application possibilities for the digitalization and connectivity of production facilities, experts at the Fraunhofer Institute for Production Technology IPT have teamed up with colleagues at the Fraunhofer Institute for Laser Technology ILT and the Fraunhofer Institute for Molecular Biology and Applied Ecology IME to build six different apparatuses for pilot applications, including process chains for manufacturing turbine blades, for producing medicines in plants, and for manufacturing battery modules for electric cars. When manufacturing turbine components for aircraft engines, precision and safety are of paramount importance. Currently, the blades are mostly milled from a solid block of titanium using machine tools. This can cause vibrations that lead to inaccuracies during machining. To solve this problem, sensors capable of precisely recording vibrations down to hundredths of a millimeter and a few milliseconds were installed in the pilot apparatus. In the future, the huge volumes of data collected during this procedure will be transmitted via the 5G network into the secure cloud, the above-mentioned Virtual Fort Knox. “Only wireless data transmission with 5G creates the conditions needed for sending control commands to the machine in real time, and preventing such vibrations by quickly adjusting the machine before they even arise,” explains Bergs.

A special feature of the new High Performance Center is that all production and sensor data is stored individually for each product – in a “digital twin” containing the entire production history. If damage arises later, one can rewind to earlier in the process and use the data to pinpoint where the fault originated in order to optimize the process. Equally, data analysis and the tracing of product history are just as valuable for the extraction of active ingredients from plants as they are for milling tasks. Under controlled conditions at Fraunhofer IME, plants are being sown, grown, biochemically altered to produce medical drugs and then harvested. As a final step, the active ingredients are extracted and isolated.

The strength of the High Performance Center in Aachen consists in the suitability of the digitalization and connectivity technologies for various fields of application. At Fraunhofer ILT, for example, researchers have tailored the concept to the manufacture of battery modules. These modules are made up of hundreds or even thousands of individual cells, which have to be welded and bonded to each other using a laser. This is a laborious process that requires high levels of reliability, because if only a single weld is compromised during battery operation, then the whole module can fail. To solve this problem, the experts in Aachen decided to use sensors to monitor the welding. “As a result, we’re able to control the quality of the laser welding in real time or trace it in the product history,” says ILT engineer Alexander Olowinsky. But that is not all: thanks to the complete connectivity of the system and the continuous flow of data, it will be possible to make the manufacturing of batteries more flexible in future. Olowinsky: “At present, the manufacturers usually specify the installation space and the cell type. By contrast, for each application, we’re able to select the ideal battery type with the ideal performance data and the right size to fit perfectly into a vehicle.”

Researchers will be presenting the various concepts for networked, adaptive production at the Hannover Messe Preview on February 6 (Exhibition Grounds, Hall 19) and at the Hannover Messe (April 23 to 27; Hall 2, Booth C22). Highlights will include a milling machine that will demonstrate aspects of digitalization and connectivity as well as sensor systems with 5G data transmission. Industry representatives interested in connecting their own technologies in the High Performance Center or further developing in the direction of Industrie 4.0 are very welcome. “We want to open the High Performance Center to industrial partners from different sectors,” says Thomas Bergs. “After all, what makes it so special is that there are no boundaries with regard to applications for networked, adaptive production.”

This press release and a printable photo are also available on the internet: http://s.fhg.de/8FX