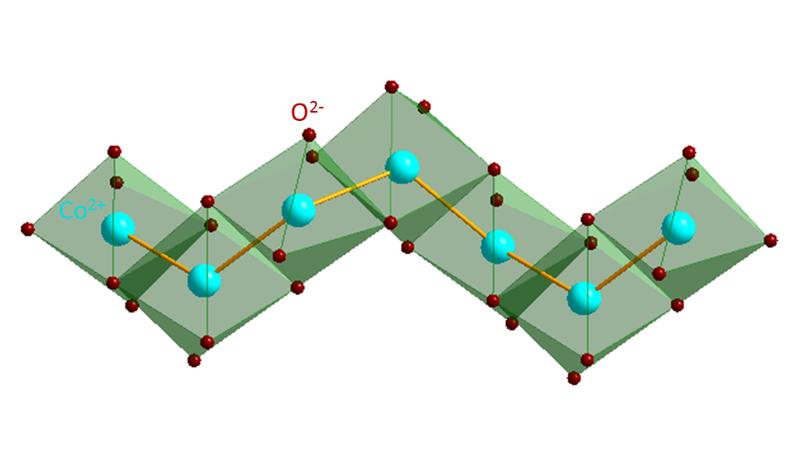 In SrCo₂V₂O₈ the cobalt ions (CO²⁺) form in the interior of a chain of edges-linked oxygen octahedra a quasi-one-dimensional electron spin chain with spin S = ½. | Quelle: © Universität Augsburg/IfP/EP V

The state of a ferromagnetic chain of spins of the cobalt ions in SrCo₂V₂O₈ (a) compared to a spin chain with coupled two- or three-string excitations (b or c). | Quelle: © Universität Augsburg/IfP/EP V
❮ ❯

Augsburg /AL/KPP - “Bethe strings” are excitations of strongly bound electron spins in one-dimensional quantum spin systems. These quantum spin states are named after the physicist Hans Bethe, who first described them theoretically in 1931. “Bethe Strings” have now been proved for the first time experimentally by the Augsburg physicists Prof. Dr. Alois Loidl and Dr. Zhe Wang, who are reporting on it in the internationally renowned journal "Nature" (issue of 8 February 2018) together with their cooperation partners from Berlin, Dresden, Mumbai, Nijmegen and San Diego.

In 1933 Hans Bethe fled to the USA from the Nazis and he contributed to the development of the atomic bomb as head of the theory department in Los Alamos. He was considered one of the leading nuclear physicists at the time. He received the Nobel Prize for Physics in 1967 for the theory of energy production in stars. However, in his early scientific career, Bethe focused on solid-state physics, especially the electron theory of metals.

In 1931 he published a manuscript entitled “Eigenwerte und Eigenfunktionen der linearen Atomkette” in the “Zeitschrift für Physik” on quantum spin states in one dimension. He succeeded in finding an exact solution to the one-dimensional quantum mechanical many-body system based on a theory by Werner Heisenberg and with the so-called Bethe ansatz, a method that was later further developed theoretically and today is an important mathematical tool of statistical physics. In this kind of system there is a one-dimensional chain of atoms at fixed positions that carry an electron spin S = ½. Many-body “string” states correspond to excitations of coupled quantum-mechanical spins, that is, magnetic self-rotation moments of the electrons that are tightly bound together and can move almost freely in the one-dimensional chain.

The lack of suitable one-dimensional materials and appropriate experimental methods has made experimental verification of this kind of many-particle “string” states and proving their excitations so far impossible. Extreme progress in material synthesis on one hand and the development of optical spectroscopy in the terahertz frequency range in very high magnetic fields on the other hand have now made this experimental detection possible for the first time.

In a first step, SrCo₂V₂O₈ crystals were synthesised and characterised at the Helmholtz-Zentrum in Berlin and at the High Magnetic Field Laboratory in the Helmholtz-Zentrum Dresden-Rossendorf. These crystals, in which the cobalt ions form a one-dimensional spin chain with spin = ½, were then used by Loidl and Wang in the High Field Magnet Laboratory of Radboud University in Nijmegen in a wide magnetic field range from 4 to 28 Tesla (for comparison: the Earth’s magnetic field in Central Europe has tested a strength of about 0.00005 Tesla). The discovered “string” excitations were finally calculated by scientists from the University of California at San Diego with the Bethe ansatz and described exactly.

“The evidence we have provided of the existence and stability of these exotic spin structures and excitations is a tremendous step forward, initially in terms of further research into spin dynamics in the field of quantum magnetism”, explains Loidl. However, this also applies to many other areas for which the application and further development of the Bethe ansatz are of outstanding importance – ranging from cold quantum gases and string theory in elementary particle physics to problems in quantum information systems.
___________________________________