No sex for all-female fish species 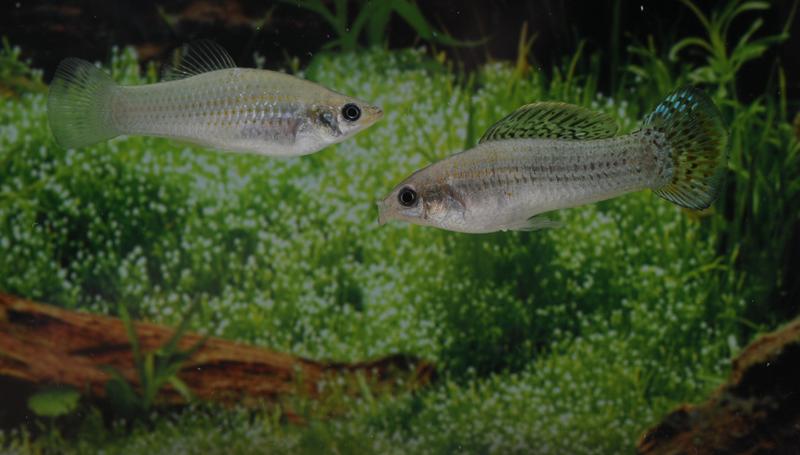 The Amazon molly does not produce any male offspring. The females reproduce asexually through gynogenesis. Nevertheless they need sperm to trigger the cloning process. | Quelle: Foto: Manfred Schartl | Download

They reproduce through gynogenesis. Their offspring are clones of the mother. According to established theories, the Amazon molly should have become extinct a long time ago. A new study shows how the fish avoids this fate.

Species that produce asexually are rare among vertebrates, making the Amazon molly (Poecilia formosa) the big exception. The small fish species, who is native to the border region of Texas and Mexico, does not produce any male offspring. The females reproduce asexually through gynogenesis, making their daughters identical clones of themselves.

This type of reproduction also means that they need sperm to trigger the cloning process. So the Amazon molly mates with closely related Molly fish to obtain this sperm. The sperm cells even penetrate the egg cell; however, none of the male’s DNA is incorporated into the Molly’s eggs. Rather, the egg completely destroys the male genes.

"According to established theories, this species should no longer exist. It should have long become extinct during the course of evolution," Manfred Schartl explains. The biochemist holds the Chair of Physiological Chemistry at the Biocenter of the University of Würzburg. Schartl with an international team of researchers explored how the Amazon molly has managed to survive in spite of this. For this purpose, the researchers sequenced the genome of the fish species and compared it with that of related species. The results of their research are published in the current issue of the journal Nature Ecology & Evolution.

There are two main reasons that argue against asexually reproducing species surviving in the long run: "Harmful changes occur in any genome at some point. In creatures whose offspring are pure clones, these defects would accumulate over generations until there are no more healthy individuals," Schartl explains. Species that reproduce sexually can easily eliminate such defects when the number of chromosomes is reduced by half during formation of egg and sperm cells to be recombined subsequently during fertilization from half of the maternal and paternal chromosomes, respectively.

There is another argument against the long survival of a species whose offspring are all clones of their mothers: "These species are usually not capable of adapting to environmental changes as quickly as their sexually producing counterparts," Schartl says. So within a few generations, they should be on the losing side of evolution which calls for the "survival of the fittest".

To answer the question why this theory does not apply to the Amazon molly, the scientists studied their genome as well as that of two related fish species that reproduce sexually. The main insight: "We found little evidence of genetic degeneration in the Amazon molly, but rather a unique genetic variability and clear signs of an ongoing evolutionary process," Manfred Schartl says and he continues to explain that especially the genes relevant for the immune system exhibit a high level of genetic variability in the genome of P. formosa . From this the authors of the study conclude that this variability combined with a broad immune response essentially contributes to the fact that the Amazon molly does not share the fate of many other species that reproduce asexually, namely to fall victim to pathogens.

Further results of the study
• Comparing the genome of the related fish species P. formosa, P. latipinna and P. mexicana shows that the differences are minor. All three carry 25,220 protein-encoded genes.
• Surprisingly, the genome of P. formosa also contains genes which a female fish does not need, for example genes for spermatogenesis, the development of males or the meiosis of egg and sperm cells.
• The absence of major genetic damages cannot be explained by the fact that P. formosa developed only a few generations ago. A look inside the genome shows that the species probably evolved some 100,000 years ago. With a new generation born every three to four months, this amounts to about 500,000 generations since P. formosa first existed, which is much longer than what standard theories predict as the time until extinction. By the way, this is also many generations more than Homo sapiens can look back on.
• P. formosa probably participates in evolutionary processes as well, however, within the boundaries of a selection process of naturally occurring mutations and the competing clones. In this respect, asexual reproduction even proves beneficial for the Amazon molly: Without the expense involved in maintaining two sexes, the fish population can grow more rapidly and achieve a significant size.
• All known vertebrates that reproduce asexually are hybrids – two specimens of P. latipinna and P. mexicana were the "parents" of Amazon molly. The scientists therefore assume that a hybrid genome is the driving force behind such species staying fit. This, however, requires the hybrid genes to be compatible with each other - which is rarely the case.
• Researchers propose a new theory called "rare-formation hypothesis" to explain the chances of survival of asexually reproducing species to replace the old theories. According to this theory, asexual species are rare not because they are inferior to other species but because the conditions for a hybrid genome, which is crucial to survive and reproduce successfully, are so specific.