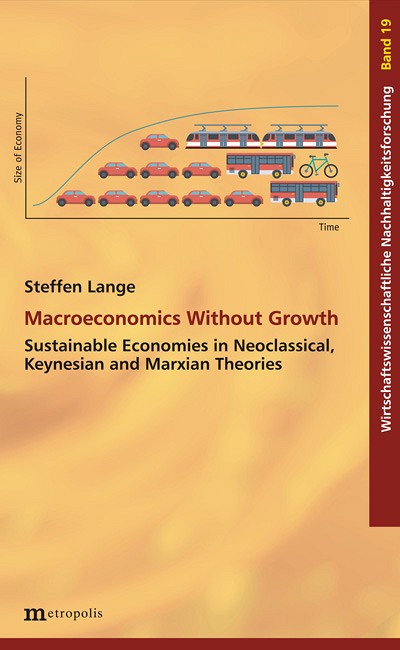 Berlin, 13th February 2018 – Ever since the success of the so-called Wirtschaftswunder (economic miracle) in post-war Germany, economic growth has remained the largely undisputed goal of economists and economic policy. The number of dissenting voices, however, employing terms such as post-growth, steady-state economies, or even degrowth, is increasing. In his newly published dissertation, economist Steffen Lange has undertaken a comprehensive look at how a growth-free economy might function from a macroeconomic perspective. Lange, a researcher at the Institute for Ecological Economy Research (IÖW), in Berlin, relies on a multiple set of theories drawn from neoclassic, Keynesian and Marxian schools of economic thought.

His conclusion: From a theoretical perspective, it is possible to sustainably manage modern economies without growth. The next step would be to develop concepts for achieving sustainable non-growth in a modern economy such as Germany’s.

“Income inequality has never been greater; we are facing climate collapse, a rapid decline in biodiversity, and the ongoing depletion of natural resources. It is clear that the sort of economic growth that we experienced in the 20th century cannot continue indefinitely”, Lange explains the inducement of his analysis. “Nevertheless, economic growth is considered by many economists to be as self-evident as day following night. I am convinced that it is essential for a sustainable future to overcome the ideology of economic growth and hope to have made a contribution by publishing this book.”

In his book Macroeconomics Without Growth, Dr. Lange demonstrates the need for economic policies enabling the management of a sustainable, and thus socially and ecologically just and stable, economy. This calls for a fundamentally new approach to economic policy, rather than just small adjustments to the status quo. To this end, Lange makes the following proposals:

► Taxation of energy and resource use, rather than wages.
► Reduction of income inequality by means of appropriate fiscal and tax policies.
► Financial and legal support for democratically structured companies vs. enhanced regulation of shareholder-oriented enterprises.
► Implementation of legal and financial frameworks for reducing employee working hours.

“Steffen Lange has provided an amazing piece of work”, Arne Heise, professor for macroeconomics at the University of Hamburg, noted with respect to the pending book release. “The book has good chances of becoming a standard work for ecological economists in due course.”

Lange’s book is part of the series Wirtschaftswissenschaftliche Nachhaltigkeitsforschung (Sustainability Research in Economics and Management Studies) by Metropolis-Verlag and has just been released. At the end of the month, Lange has another book coming out, together with his co-author Tilman Santarius: Smarte Grüne Welt? – Digitalisierung zwischen Überwachung, Konsum und Nachhaltigkeit (Smart Green World? – Digitalization between Surveillance, Consumerism and Sustainability), to be published by Oekom.

+++++++++++++++++++
IÖW is a leading scientific institute in the field of practice-oriented sustainability research. It devises strategies and approaches for viable, long-term economic activity – for an economy which enables a good life and preserves natural resources.
www.ioew.de