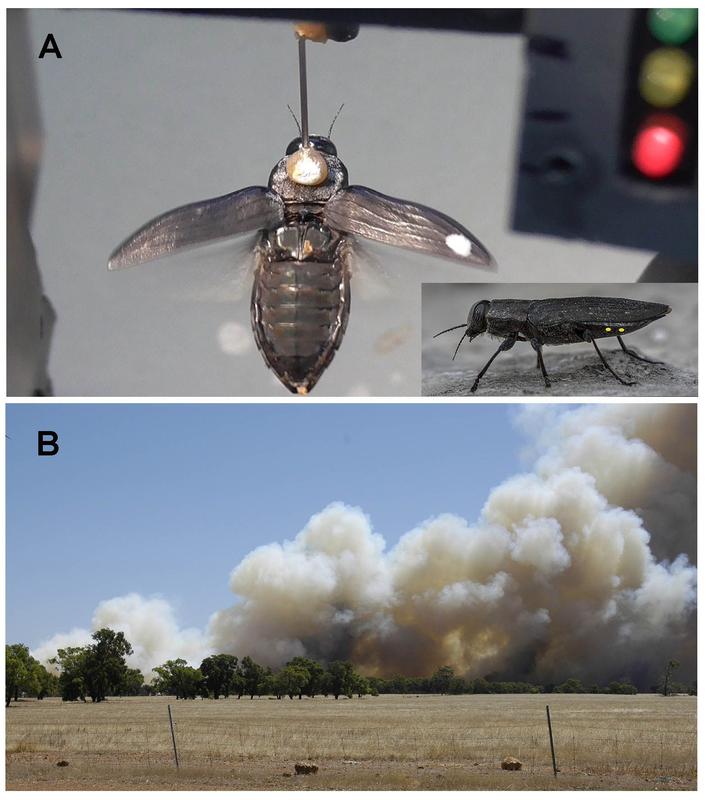 The Australian jewel beetle Merimna atrata has several heat sensors. Originally it was thought that it uses them to detect forest fires: The insect lays its eggs in the wood of burned eucalyptus trees. Researchers at the University of Bonn were finally able to refute this hypothesis. Instead, the beetle appears to need its heat sensors for a different purpose: to not burn its feet on landing. The study has now been published in the journal PLOS ONE.

The Australian fire beetle is attracted to freshly burnt wood. Experts also call this pyrophilia (“love of fire”). This behavior is not very common in insects. Merimna atrata however has a good reason for this: The dead wood provides plenty of food for the larvae of the beetle, so it uses the wood for oviposition.

But how does Merimna find a freshly burned area? For some time it has been known that the fire beetle has heat sensors with which it can detect infrared radiation. In a sense, it “sees” hot places in its environment against a cooler background. It was originally believed that the insects use this ability to detect forest fires.

“However, the IR organs in Merimna atrata are relatively insensitive”, Dr. Helmut Schmitz emphasizes. Schmitz is a lecturer at the Institute of Zoology at the University of Bonn; he investigates thermo and infrared reception in the black insects for nearly two decades. “This actually contradicts the assumption that the IR organs enable the beetle to detect fires from a greater distance.”

Together with his colleagues, Schmitz has now been able to demonstrate for the first time that these doubts are justified. The scientists designed an ingenious experiment for this purpose. Put simply, they stuck the beetles with their backs to the end of a pin and used this to hang them up. This left the experimental animals with the ability to fly continuously, but without moving forward. “More importantly: They were able to navigate in any direction, i.e. turning right or left”, emphasizes Schmitz.

Then the scientists stimulated the flying beetles with weak infrared radiation from the side. The beetles changed their flight direction in response, but always away from the source and never towards it.

“Merimna’s IR organs are located on both sides of its abdomen; incidentally, this is unique in the animal kingdom”, explains Schmitz. “When we occluded the IR receptors with aluminum foil, the animals no longer reacted to the radiation, but always carried on flying straight ahead. As soon as we removed the foil they displayed their original behavior again.” This observation suggests another use of the heat sensors: “Presumably they help the fire beetles avoid hot spots when approaching an oviposition site such as a freshly burnt branch; these hot spots are not visible with the naked eye to humans and animals during the day,” says Schmitz.

How the animals detect forest fires remains unclear. Even visual stimuli seem to play no role in fire detection, despite Merimna atrata having good eyesight. The researchers tested this hypothesis by showing the beetles slides of large clouds of smoke rising above a forest area. But the insects were completely unimpressed: They never changed their flight direction.

“We therefore assume that Merimna atrata gets its information about an ongoing fire from the smell of smoke”, concludes Helmut Schmitz. This is also important for another reason: Odors can tell you exactly what is actually burning. In contrast, this information cannot be inferred from the heat development or the appearance of a smoke plume. Merimna is very picky: It only lays its eggs in burnt eucalyptus wood and avoids other trees. If the insect was to rely on its IR sense, it would risk being lured into the wrong kind of fires.

Something quite different can be seen with a close European relative; the fire beetles of the genus Melanophila: Their larvae develop in a variety of trees. Heat perception would be quite worthwhile for them. In fact, Melanophila also has infrared sensors, but they are completely different. They can presumably detect infrared radiation even from a long distance: According to measurements and theoretical calculations, Melanophila heat sensors are at least 500 times more sensitive than those of Merimna atrata.