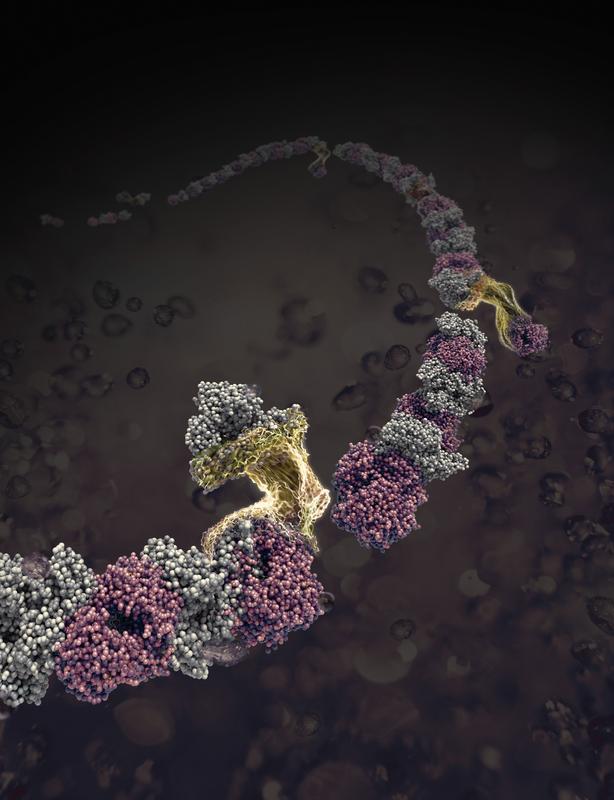 Be it in spider silk, wood, the spaces between body cells, in tendons, or as a natural sealant for small wounds: protein fibres are found virtually everywhere in nature. These small protein fibres, also referred to as protein nanofibres by experts, often have outstanding properties such as a high stability, biodegradability, or antibacterial effect. Artificially creating these fibres is not easy, much less assigning them specific functions. That and how fibres with new properties can be successfully created is now being reported by materials scientists from Friedrich Schiller University Jena (Germany) in the latest issue of the renowned journal ‘ACS NANO’ (DOI: 10.1021/acsnano.7b07196). This is a result of a collaboration with a team from the Leibniz Institute of Photonic Technology in Jena (Leibniz-IPHT).

“Protein fibres consist of several natural protein macromolecules”, explains Prof. Dr. Klaus D. Jandt from the Otto Schott Institute of Materials Research at Jena University, and continues: “Nature builds these nanomaterials, whose diameter is roughly a 1,000 times smaller than that of a human hair, by way of self-assembly processes.” What presents little difficulty for nature with its millions of years of experience is usually not that easy to create under laboratory condition. Prof. Jandt and his team have in recent years nonetheless succeeded in creating protein nanofibres from the natural proteins fibrinogen and fibronectin and controlling their size and structure – linear or branched.

The researchers of Prof. Jandt’s group next aimed to predefine specific properties of the protein nanofibres for their later use as components in biosensors, drug delivery particles, optical probes, or bone cements. To do this, the researchers from Jena came up with the idea of combining two different proteins in a self-assembling protein nanofibre to create new fibre properties this way. Jandt and his team were successful: They used the protein albumin, which is responsible for the osmotic pressure in blood, and haemoglobin, the protein of the red blood pigment facilitating oxygen transport in the blood. The scientists dissolved both these proteins in ethanol and then heated them to 65 °C. Over several interim stages, this resulted in the apparently autonomous formation of new hybrid protein nanofibres containing both proteins for the very first time. This involves a so-called handshake between the two proteins, meaning that similar sections of both combine to form a fibre.

“Proving that these new hybrid protein nanofibres indeed contain both proteins was not easy as the new fibres are so tiny that there are hardly any microscopy methods able to see details in them”, explains Klaus Jandt and adds: “We were provided with decisive support for this proof by Prof. Deckert and his team from the Leibniz Institute of Photonic Technology.” Prof. Dr Volker Deckert and his team found optical signals in the new hybrid nanofibres that are as typical for albumin and haemoglobin as a fingerprint is for a person. They relied on so-called tip-enhanced Raman spectroscopy (TERS) for this. “The method's extreme sensitivity allowed us to identify the different proteins even without special markers, and also permitted their unambiguous classification in close cooperation with Prof. Jandt's colleagues”, says Prof. Deckert from the Leibniz-IPHT in Jena.

Biomimetic principles for the materials of the future

The scientists from Jena look upon the creation and proof of the new nanofibres comprising several proteins as a breakthrough. The innovative fibres can now be used for the targeted construction of all together new, larger structures with the desired properties that could not be created so far. Networks of the new nanofibres are to be used as a new material for regenerating bone and cartilage in the future, for example. Prof. Jandt is convinced that “this has opened the door for a completely new generation of functional materials for medical engineering, nanoelectronics, sensorics, or optics, all based on natural substances and construction principles”, and adds: “These biomimetic principles will have a decisive effect on the materials of the future.” The scientists from Jena are confident that this new self-organization approach can also be successfully transferred to other proteins as long as they feature identical amino acid sequences in parts.

This project was supported by the German Research Foundation DFG under the project name “Novel functional materials based on self-assembled protein nanofibers: creating and understanding nanofibers”.