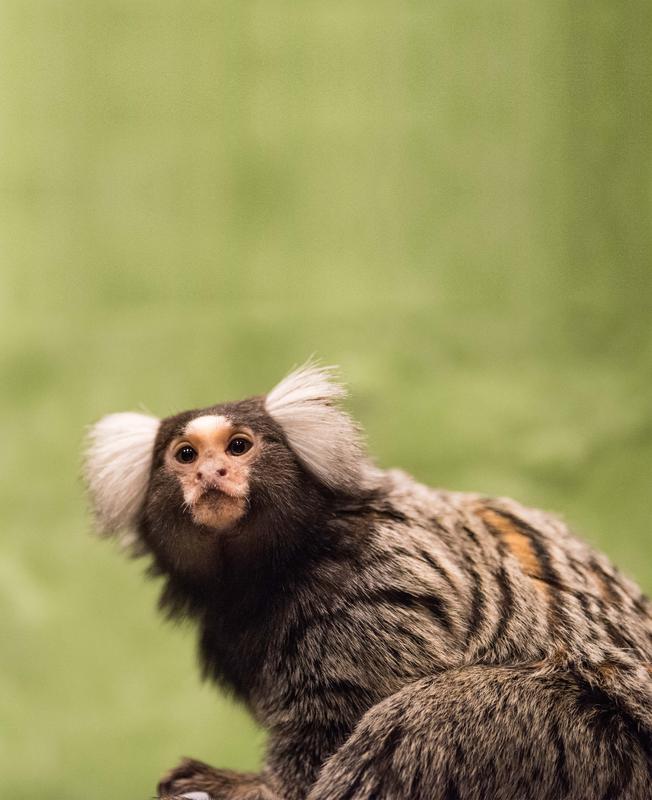 From short ‘tsiks’ and ‘ekks’ to drawn-out ‘phees’ – all the sounds produced by marmoset monkeys are made up of individual syllables of fixed length: that is the result of a study by a team of researchers headed by Dr. Steffen Hage of the Werner Reichardt Centre for Integrative Neuro-science (CIN) at the University of Tübingen. The smallest units of vocalisation and their rhythmic production in the brain of our relatives could also have been a prerequisite of human speech. The study was just published in Current Biology.
‘Seven times a second, our speech aparatus can form a syllable’, says Steffen Hage.

Regardless if it is Batman shouting ‘Ha!’ or Mary Poppins singing ‘Supercalifragilisticexpialidocious’: when we speak, our utterance is made up of small units that are on average a seventh of a second long. This rhythm inherent in our production of syllables is as much constrained by the structure of our voicebox as it results from the processes that control speech in the brain. These biological fundaments of speech may have been very similar in our ancestors.

If we want to understand the evolution of human speech, we should look into its biological basis in our close relatives in the animal kingdom: primates. However, we still do not have a sufficient understanding of their vocalisation. To come to grips with the neurobiological basis of primate vocalisation, Hage’s neuroscientific research group works with marmoset monkeys, a primate species from South America. Marmosets are far closer related to us than e.g. passerine birds, whose vocalisation has been the focus of much research into the rhythm and length of syllables.

The researchers recorded thousands of instances of the little monkeys’ ‘tsiks’, ‘ekks’ and ‘phees’ in a sound chamber. They interrupted the animals’ natural vocalisation with white noise at irregular intervals. The researchers effectively ‘talked over’ the monkeys, causing them to fall quiet.

Thomas Pomberger, one of the study’s authors, explains the results: ‘The marmosets’ ‘phee’ had so far been considered part of their basic vocabulary, alongside the ‘tsik’ and ‘ekk’. We observed that they would stop right in the middle of their ‘phee’ calls when we disrupted them with noise. Moreover, that would only happen at specific points within the call.’ Co-author Cristina Risueno-Segovia adds: ‘What we found was that what had been known as a long ‘phee’ call actually consists of small units of about the same length as a ‘tsik’ or ‘ekk’ – about 100 milliseconds.’ Their supervisor Hage says: ‘Until now, the supposed existence of the long ‘phee’ has not allowed for the conclusion that we can draw now: just like us, marmoset monkeys have a ‘hardwired’ rhythm that controls their vocalisation. It is even similarly fast.’

Such a rhythm might be an evolutionary prerequisite on the path to developing true speech. The new study demonstrates that research in marmosets can provide the necessary clues to better un-derstand the origins and properties of human speech – a question that has been much debated in the scientific community.