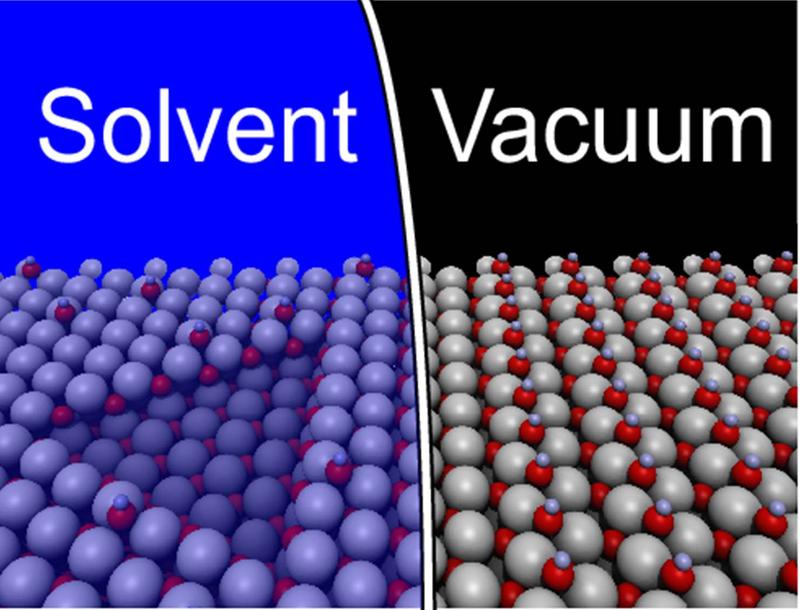 Water shapes the surface which is completely smooth in vacuum. Geometric structures, as the triangle on the left appear under the influence of water. Grey represent zinc, red oxygen and blue hydrogen | Quelle: Suhyun Yoo, Max-Planck-Institut für Eisenforschung GmbH | Download

A central element in such diverse technological problems as corrosion protection, battery materials or hydrogen production via electrolysis or fuel cells is the contact between two conducting elements – the electrolyte and the solid electrode at which a voltage is applied.

Scientist from the Computational Materials Design department of the Max-Planck-Institut für Eisenforschung have come a great deal closer to achieving this goal. Within the framework of the Excellence-cluster RESOLV, a joint research initiative of seven research institutions in the Ruhr area, an unexpected phenomenon was found with the help of highly accurate quantum mechanical methods and powerful supercomputers. Previous studies of metallic surfaces repeatedly show that the structure of the surface hardly changes in contact with a liquid electrolyte. The researchers were therefore very surprised when they brought a semi-conducting surface into contact with an electrolyte. “We were completely surprised to see the formation of structures, which are unstable in the absence of water and are also not observed”, says Dr. Mira Todorova, head of the Electrochemistry and Corrosion group. The department head Prof. Neugebauer is equally enthusiastic: “Our simulation methods allowed us not only to find a completely new and unexpected phenomenon, but also to identify the underlying mechanisms. This opens up totally new possibilities to shape and design surfaces with atomic precision.”

These studies not only offer new insights into future-oriented technologies, but also provide a new perception of a question intensely discussed in geology: The cause of the enhanced crack formation in minerals when they are exposed to a humid environment.

The work was published in the journal Physical Review Letters.