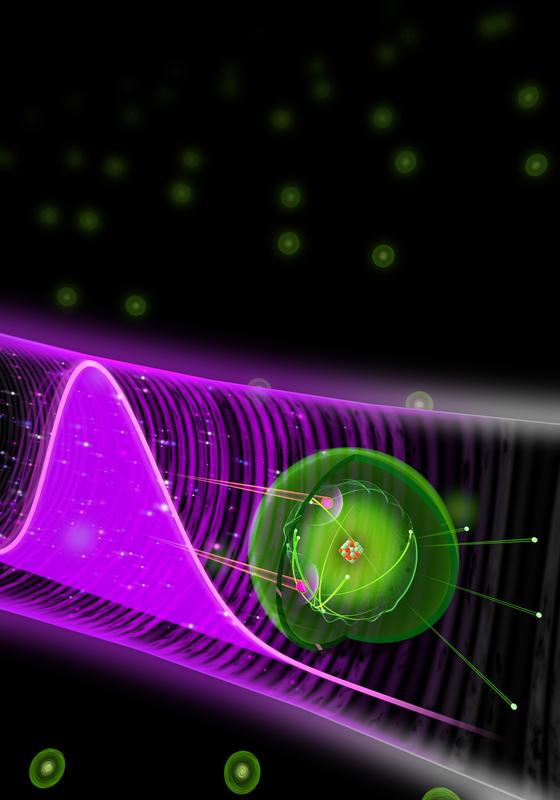 A newly developed laser technology has enabled physicists in the Laboratory for Attosecond Physics (jointly run by LMU Munich and the Max Planck Institute of Quantum Optics) to generate attosecond bursts of high-energy photons of unprecedented intensity. This has made it possible to observe the interaction of multiple photons in a single such pulse with electrons in the inner orbital shell of an atom.

In order to observe the ultrafast electron motion in the inner shells of atoms with short light pulses, the pulses must not only be ultrashort, but very bright, and the photons delivered must have sufficiently high energy. This combination of properties has been sought in laboratories around the world for the past 15 years. Physicists at the Laboratory for Attosecond Physics (LAP), a joint venture between the Ludwig-Maximilians-Universität Munich (LMU) and the Max Planck Institute of Quantum Optics (MPQ), have now succeeded in meeting the conditions necessary to achieve this goal. In their latest experiments, they have been able to observe the non-linear interaction of an attosecond pulse with electrons in one of the inner orbital shells around the atomic nucleus. In this context, the term ‘non-linear’ indicates that the interaction involves more than one photon (in this particular case two are involved). This breakthrough was made possible by the development of a novel source of attosecond pulses. One attosecond lasts for exactly one billionth of a billionth of a second.

The door for observing the ultrafast motion of electrons deep inside atoms has been opened. Physicists in the Laboratory for Attosecond Physics (LAP) at the LMU Munich have developed a technology that allows them to generate intense attosecond pulses. These pulses can be used to follow the motion of electrons within the inner shells of atoms in real time by freezing this motion at attosecond shutter speeds.

The experimental procedure used to film electrons in motion makes use of the ‘pump-probe’ approach. Electrons within a target atom are first excited by a photon contained within the pump pulse, which is then followed after a short delay by a second photon in a probe pulse. The latter essentially reveals the effect of the pump photon. In order to implement this procedure, the photons must be so tightly packed that a single atom within the target can be hit by two photons in succession. Moreover, if these photons are to have a chance of reaching the inner electron shells, they must have energies in the upper end of the extreme ultraviolet (XUV) spectrum. No research group has previously succeeded in generating attosecond pulses with the required photon density in this spectral region.

The technology that has now made this feat possible is based on the upscaling of conventional sources of attosecond pulses. A team led by Prof. Laszlo Veisz has developed a novel high-power laser capable of emitting bursts of infrared light – each consisting of only a few oscillation cycles – which contain 100 times as many photons per pulse as in conventional systems. These pulses, in turn, allow the generation of isolated attosecond pulses of XUV light containing 100 times more photons as in conventional attosecond sources.

In a first series of experiments, the high-energy attosecond pulses were focused on a stream of xenon gas. Photons that happen to interact with an inner shell of a xenon atom eject electrons from that shell and ionize the atom. By using what is known as an ion microscope to detect these ions, the scientists were able, for the first time, to observe the interaction of two photons confined in an attosecond pulse with electrons in the inner orbital shells of an atom. In previous attosecond experiments, it has only been possible to observe the interaction of inner shell electrons with a single XUV photon.

“Experiments in which it is possible to have inner shell electrons interacting with two XUV attosecond pulses are often referred to as the Holy Grail of attosecond physics. With two XUV pulses, we would be able to ‘film’ the electron motion in the inner atomic shells without perturbing their dynamics,” says Dr. Boris Bergues, the leader of the new study. This represents a significant advance on attosecond experiments involving excitation with a single attosecond XUV photon. In those experiments, the resulting state was ‘photographed’ with a longer infrared pulse, which itself had a significant influence on the ensuing electron motion.

“The electron dynamics in the inner shells of atoms are of particular interest, because they result from a complex interplay between many electrons that interact with each other,” as Bergues explains. “The detailed dynamics resulting from these interactions raise many questions, which we can now address experimentally using our new attosecond source.”

In the next step, the physicists plan an experiment in which they will time resolve the interaction by splitting the high-intensity attosecond pulse into separate pump and probe pulses.

The successful application of non-linear optics in the attosecond domain to probe the behaviour of electrons in the inner orbital shells of atoms opens the door to a new understanding of the complex multibody dynamics of subatomic particles. The ability to film the motion of electrons deep in the interior of atoms promises to reveal much about a mysterious realm that has remained hidden from our gaze. Thorsten Naeser

Figure caption:
After the interaction of a xenon atom with two photons from an attosecond pulse (purple), the atom is ionized and multiple electrons (green balls) are ejected. This two-photon interaction is made possible by the latest achievements in attosecond technology.