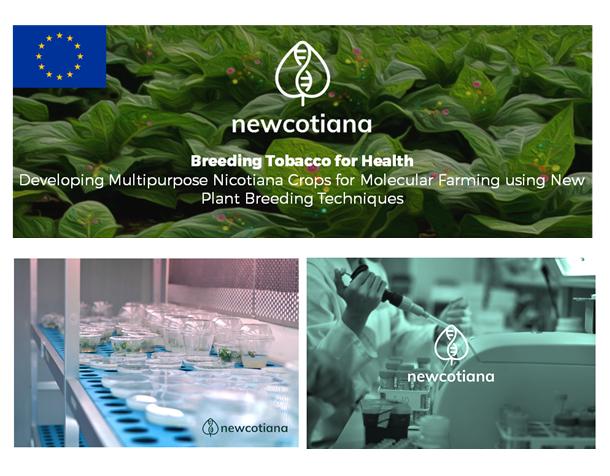 In February 2018, the EU-funded project NEWCOTIANA was launched. The research team of Ralph Bock from the Max Planck Institute of Molecular Plant Physiology is participating in this research and innovation action that combines several new plant breeding techniques to produce medical and cosmetic products in tobacco plants.

- Taking advantage of cutting-edge molecular breeding methodologies, researchers will develop new varieties of tobacco and its wild relative Nicotiana benthamiana to produce added-value compounds such as antibodies, vaccines and drugs in a sustainable manner.

- NEWCOTIANA is a 7.2 M€ H2020 EU project coordinated by scientists from the Institute for Plant Molecular and Cellular Biology (IBMCP) of the Spanish Research Council (CSIC) with participation of 19 industrial and academic partners from 8 European countries and Australia.

Tobacco (Nicotiana tabacum) is a crop used to produce cigarettes. With overwhelming scientific evidence that smoking is harmful, even major cigarette companies are now committed to end smoking. Tobacco plants can, however, also be used for other purposes that are clearly beneficial for health. Instead of drying the leaves to make cigarettes, researchers have found promising New Plant Breeding Techniques (short: NPBT) to turn tobacco leaves into plant factories for medical, pharmaceutical and cosmetic products. The same is true for the leaves of Nicotiana benthamiana, a dwarf tobacco relative from Australia that is especially suited for indoors production of bio-pharmaceuticals. In this way, the plant will produce vaccines, antibodies, and other health-promoting substances including anti-aging or anti-inflammatory compounds.

The cutting-edge NPBTs include the so-called CRISPR technique, also known as genome editing, which offers unprecedented opportunities for crop breeding. Other NPBTs that researchers will apply are modern forms of grafting, or infiltration for temporary gene expression.

"Our aim is to breed new varieties of tobacco that will work as biofactories with high efficiency", explains Ralph Bock, leading scientist in the project. "Using these plants as safe production platforms for molecular pharming allows us to harvest high-value medical substances from plants."

By taking advantage of NPBTs, NEWCOTIANA is expected to contribute to revive the traditional cultivation of tobacco, creating new applications that are good for health, and revitalizing rural areas in decline with high-value products in line with the European Knowledge-Based Economy.

"The consortium will carry out experiments to assess the efficiency and safety of NPBTs, providing the industry, policy makers and consumers with experimental evidence that facilitate the decision-making process on the adoption of NPBTs in Europe. " adds Diego Orzaez from CSIC, coordinator of the NEWCOTIANA project. “NEWCOTIANA's scientific aims are ambitious, and in addition to solving a number of technical issues we realize that we also need to take into account regulatory requirements and start a dialogue with stakeholders and the general public.”

The research team of Ralph Bock from the Max Planck Institute of Molecular Plant Physiology, Potsdam, Germany, will make an important contribution to NEWCOTIANA by breeding new Nicotiana species using horizontal genome transfer, a process that occurs in grafted plants and was recently discovered by the team (Fuentes, I. et al., Nature 2014).

NEWCOTIANA, which was launched in February 2018 in Brussels, is a 4.5-year project funded by the European Union’s Horizon 2020 Research and Innovation programme under grant agreement No 760331.

BY: Diego Orzaez and Markus Schmidt