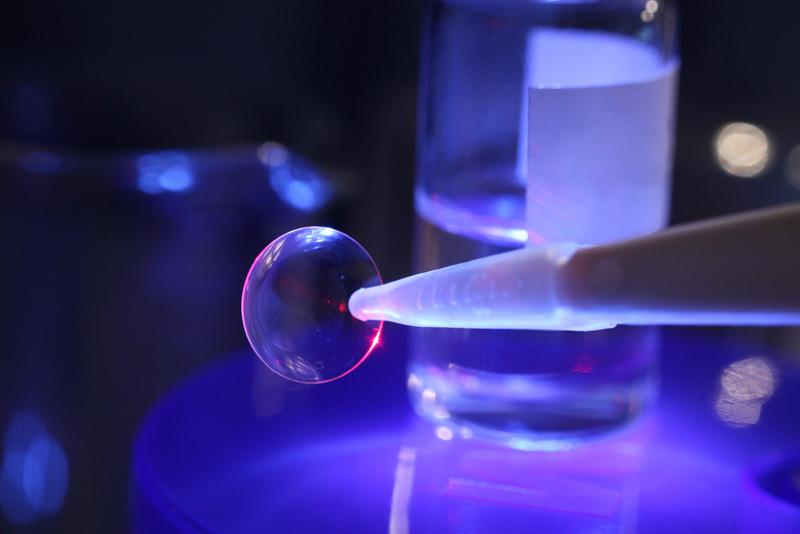 Microbial infections of the cornea can have serious consequences, including blindness in the worst case. The treatment of keratitis, a condition caused by certain pathogens, always presents major challenges to ophthalmologists. These corneal infections frequently cannot be successfully treated with the therapies currently available. Fraunhofer researchers are pursuing a new approach: contact lenses with germicidal properties could offer an alternative to conventional therapies. Initial tests in the laboratory and on donor corneas were successful.

Infections of the cornea are a major cause of loss of vision worldwide. The WHO estimates that one in every four losses of eyesight can be attributed to corneal opacity. Usually, the cause of this opacity is microbial keratitis – an inflammation of the cornea caused by germs such as bacteria, fungi, yeasts, viruses or Acanthamoeba. Ophthalmologists fear the type of keratitis caused by Acanthamoeba most of all because it responds poorly to the available drugs. Current therapies combining disinfectants with antibiotics have pronounced side effects and damage the cornea.

In the early stages, the symptoms of Acanthamoeba keratitis are unspecific: the eye turns red, waters and sufferers complain of blurred vision. After five weeks, these symptoms are followed by severe pain – a sign that nerve cells have already been damaged. The disease usually occurs in just one eye. Early diagnosis and treatment are hugely important, because in its latter stages the infection can lead to permanent loss of vision.

Soft contact lenses are the principal means by which the pathogens are transmitted, accounting for 88 percent of cases. In surveys, patients reported that they had left their contact lenses in for several days or neglected to disinfect them with the proper cleaning solutions, rinsing them under running tap water instead. “Acanthamoeba are essentially everywhere. And contact lenses that are not completely clean are an excellent breeding ground for these parasites. The amoebae literally eat into the cornea,” explains Dr. Joachim Storsberg, scientist at the Fraunhofer Institute for Applied Polymer Research IAP. As current treatments can take up to a year and are often ineffective, the biomaterials expert and his team – which includes Christopher Plog from the Beuth University of Applied Sciences Berlin, who wrote his thesis on this subject – are carrying out research into innovative, gentle therapies that do not require the use of antibiotics. Contact lenses treated with plasma could turn out to be a promising alternative. “Plasma is known as a germicide. It has already been successfully used for several years in the treatment of skin diseases. So it made sense to develop contact lenses with germicidal properties and see whether they attack the amoebae and prevent them from multiplying. Together with Prof. Saadettin Sel, an ophthalmologist at Heidelberg University, we came up with the idea of using plasma medicine for this purpose,” says Storsberg. The result is plasma-treated hydrogel lenses, which will be inserted into the eye of infected patients.

To achieve the desired germicidal effect, the researchers chose plasma-activated water (PAW). The atmospheric-pressure plasma was generated by means of dielectric barrier discharge, with the discharge occurring between the electrode and the medium. The researchers also manufactured the contact lenses themselves. As material they used silicone hydrogel – a soft plastic that swells in water patented by Fraunhofer IAP. “Silicone hydrogel does not react with the plasma-activated water, but absorbs it very effectively without changing its properties,” says Storsberg, describing the advantages of the polymer material. In addition, PAW is easy to produce and does not develop resistance. “Because of its oxidizing effect, it is able to irreversibly destroy the cell membranes of the amoebae,” says Storsberg. The antibacterial potential of the plasma-treated lenses has been confirmed in all in-vitro experiments, where the PAW hydrogels showed pronounced antimicrobial effects. After growing the amoebae in pure culture, the researchers applied the PAW solution directly to the sample. Just five minutes later, all amoebae had been inactivated. In further experiments, the researchers infected discarded, no longer transplantable donor corneas with a type species of the Acanthamoeba and covered them with a PAW contact lens. In this test, all the pathogens were also killed. Currently the IAP researchers are investigating whether the hydrogel contact lenses are also suitable for treating mycoses.

In the upcoming clinical trials, which could start as early as this summer, Dr. Storsberg’s team will work together with ophthalmologists to determine how long the PAW-treated lenses can be used to achieve full therapeutic success without damaging the cornea. The research results obtained to date have already been published in journals of ophthalmology.