Controlled coupling of light and matter 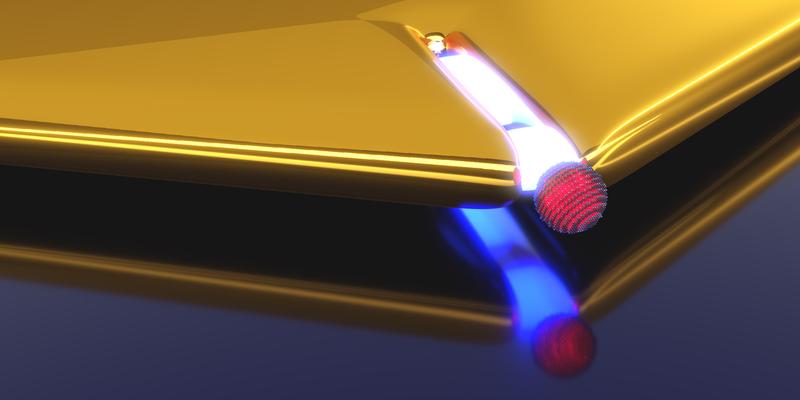 Researchers from Würzburg and London have built the foundations for a new field of nano-optics: they have succeeded in controlling the coupling of light and matter at room temperature.

Publishing in a journal like Science Advances usually heralds a particularly exciting innovation. Now, physicists from the Julius-Maximilians-Universität Würzburg (JMU) in Germany and Imperial College London in the UK are reporting controlled coupling of light and matter at room temperature.

This achievement is particularly significant as it builds the foundations for a realization of practical photonic quantum technologies. Indeed, while many demonstrations of optical quantum processes require cryogenic temperatures to protect the quantum states, the present work elevates the quantum processes to room temperature and introduces controllability – both vital elements of quantum technologies such as quantum computers, which to a certain extent "calculate with light" and are conceivably many times more powerful than existing computers.

Emitted photons are trapped and re-absorbed

A light particle (photon) is generated when, for example, an exited molecule or a quantum dot returns to its low-energy ground state. This process is generally known as spontaneous emission and is usually irreversible, i.e. an emitted photon will not simply return to the emitter to be absorbed again.

But if the emitter is intimately coupled to something like a storage element for light, a so-called optical resonator, then the emitted photon remains in the vicinity of the emitter for a sufficiently long period of time, considerably boosting its chance to be reabsorbed. "Such a reversal of spontaneous emission is of highest importance for quantum technologies and information processing, not least as it facilitates exchange of quantum information between matter and light while preserving the quantum properties of both," says Professor Ortwin Hess of Imperial College.

Such an exchange of quantum information is, however, usually only possible at very low temperatures, which renders spectral lines of emitters spectrally very sharp and therefore increases the probability of absorption. The teams of professors Bert Hecht and Ortwin Hess are now among the pioneering groups in the world who have succeeded in achieving the state of strong coupling of light and a single quantum emitter (quantum dot) at room temperature.

To achieve the re-absorption of a photon even at room temperature, the researchers use a plasmonic nanoresonator, which has the form of an extremely narrow slit in a thin gold layer. "This resonator allows us to spatially concentrate the electromagnetic energy of a stored photon to an area which is not much larger than the quantum dot itself," explains Professor Hecht’s co-worker Heiko Groß. As a result, the stored photon is re-absorbed with high probability by the emitter.

Precise control of the coupling between emitter and resonator

While similar ideas have already been implemented by other researchers in systems such as single molecules, in the work published now the researchers from London and Würzburg have managed to also control the coupling between the resonator and the quantum emitter by implementing a method that allows them to continuously change the coupling and, in particular, to switch it on and off in a precise manner. The team achieved this by attaching the nano-resonator to the tip of an atomic force microscope. This way they are able to move it with nanometer precision within the immediate vicinity of the emitter - in this case a quantum dot.

Ultrafast exchange of energy between emitter and resonator

Building on their accomplishment, the researchers now hope to be able to controllably manipulate the coupling of the quantum dot and the resonator not only by changing their distance but also through external stimuli - possibly even by single photons. This would result in unprecedented new possibilities in the challenging route towards a realization of optical quantum computers.

"It is clearly a most useful feature that the exchange of energy between the quantum dot and the resonator here happens extremely fast," says Groß. This solves a challenge of a low-temperature set-up: At very low temperatures, the oscillation of energy between light and matter is significantly slowed down by the long storage times of the resonator.