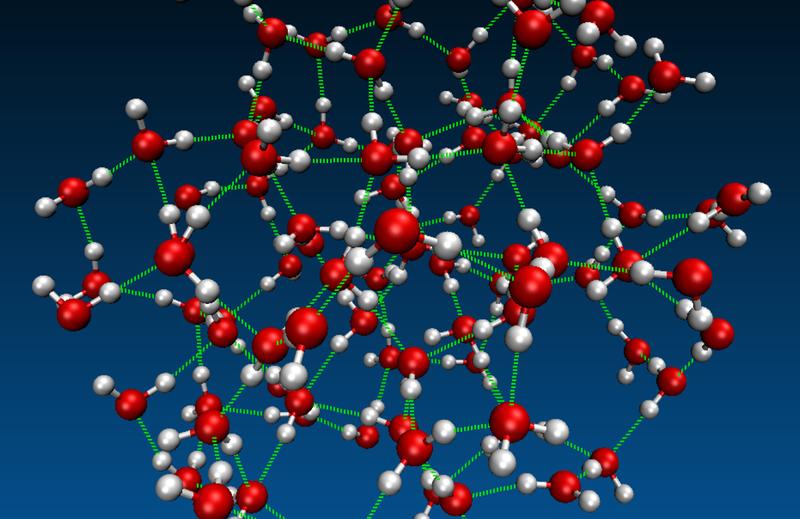 Liquid water is permeated by a highly dynamic network of strong hydrogen bonds. Motions of molecules in this network underlie fundamental physical and chemical phenomena. Chemical processes like proton transfer and physical processes such as energy dissipation are guided by interaction between motions within molecules, and motions between molecules - comparable to an intricate collective molecular “dance”.

Recently, scientists at the Max Planck Institute (MPI) for Polymer Research in Mainz, Germany, have provided fundamental mechanistic insight into this coupling of internal and external molecular motions in water using a novel spectroscopy technique. They have developed the so-called two-dimensional, ultra-broadband terahertz-infrared-visible (2D TIRV) spectroscopy. “We have combined infrared pulses with ultra-broadband terahertz pulses to develop this two-dimensional spectroscopy. This enables us to measure how the internal motion of a water molecule is directly coupled to the motions of the surrounding hydrogen-bonded network”, said Dr. Maksim Grechko, Group Leader at the MPI for Polymer Research.

By combining the experimental results provided by the 2D TIRV spectroscopy with cutting-edge molecular dynamics calculations Grechko and his co-workers have clarified the nature of the coupling between the intermolecular and intramolecular coordinates in the ensemble of water molecules. They have found that change in the length of the bond between oxygen and hydrogen in a water molecule is directly coupled to two types of mutual motion of nearby water molecules. The first type of such intermolecular motions is associated with a change of the length of the hydrogen bonds connecting the molecules. And the second type is a complex umbrella-like motion of few water molecules together.

Significance of 2D TIRV spectroscopy for the future

These new results obtained by scientists at the MPI for Polymer Research are very important. Water is ubiquitous. It is the most common solvent and part of many chemical reactions in nature as well as, e.g. in industry. Water provides a unique environment for reactivity of dissolved chemical and biological molecules.
Professor Mischa Bonn, Director at the Max Planck Institute for Polymer Research and head of its Molecular Spectroscopy department, emphasized: „The newly developed 2D TIRV spectroscopy technique provides an exciting opportunity to gain new insights into the coupling between motions inside a molecule and collective motion of their molecule ensemble. We expect many new and stimulating discoveries from this spectroscopy in the future. ”

This novel spectroscopy technique can be used to reveal the heterogeneity and homogeneity of water near ions, osmolytes, and biomolecules such as proteins. Therefore, Grechko and his team continue their scientific work and technical development for further investigations into the structure and dynamic of water molecules.

About the Max Planck Institute for Polymer Research:
The Max Planck Institute for Polymer Research (MPI-P) ranks among the globally leading research centers in the field of polymer research since its foundation in 1984. The focus on soft materials and macromolecular materials has resulted in the worldwide unique position of the MPI-P and its research focus. Fundamental polymers research on both production and characterization as well as analysis of physical and chemical properties are conducted by scientific collaborators from all over the world. Presently over 500 people are working at the MPI-P, the vast majority of whom are engaged in scientific research.
http://www.mpip-mainz.mpg.de/home/en