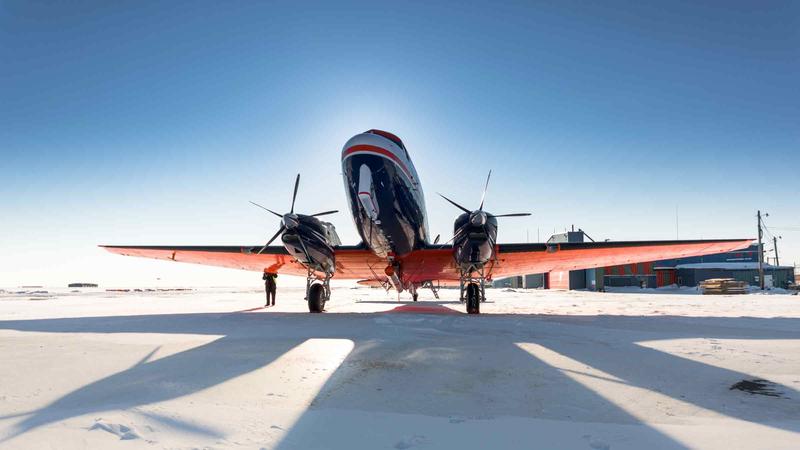 On 15 March, the AWI research aeroplane Polar 5 will depart for Greenland. Concentrating on the furthest northeast region of the island, an international team of researchers will spend the next four weeks studying how the Arctic is changing. In the course of the PAMARCMiP campaign they will measure the sea ice and the atmosphere between Greenland and Svalbard – on the ground, using a tethered balloon, and from the air. Their primary target: carbon particles.

Historically, Greenland isn’t exactly considered to be prone to wildfires. But last summer a fire broke out in the moors on the western half of the island, eventually covering several square kilometres. Satellite images revealed the massive smoke clouds. If fires like this become more common in the Arctic in the future, there’s no telling what the repercussions will be, even for practically uninhabited regions. When carbon particles – also referred to as black carbon – settle on snow and ice, these surfaces become less reflective and absorb more sunlight. In turn, this causes the ice to melt more quickly than in the past.

But wildfires are just one of many sources of carbon particles. “We’re already witnessing a significant growth in shipping in the Arctic. Moreover, the region is attracting more and more attention due to its natural resources. That’s why, in the campaign, our goal is to determine what the consequences of the increase in carbon and other aerosol particles would be,” says Andreas Herber, the campaign’s project coordinator at the Alfred Wegener Institute, Helmholtz Centre for Polar and Marine Research (AWI). In addition, the particles are so small and light that they could find their way to Greenland from such distant sources as Siberia and North America.

During the four-week campaign, roughly 30 researchers and technicians from Germany, Denmark, the Netherlands, and Japan will combine aerial observations and ground readings to assess e.g. the levels of carbon in the snow and clouds, using Greenland’s Villum Research Station as their base of operations. The PAMARCMiP (Pan-Arctic Measurements and Arctic Climate Model Intercomparison Project) campaign is part of the German Research Foundation (DFG)-sponsored Collaborative Research Centre 172 – (AC)3 Arctic Amplification. The goal is to use a variety of methods to monitor climate developments in the Arctic, helping to improve the reliability of models for predicting the future warming of the region. This unusually rapid warming is due to a number of processes that shape the Arctic’s climate, but which still aren’t fully understood. “The recordings that will be taken during PAMARCMiP will add an important puzzle piece to grasping Arctic climate change. Networking several of the Collaborative Research Centre’s sub-projects will allow us to use weather and climate models to more accurately interpret our observations. We also hope to arrive at new conclusions, for instance on the current sources of carbon and its transport routes to the Arctic,” says André Ehrlich from the Leipzig Institute for Meteorology of the Leipzig University, which coordinates the DFG Collaborative Research Centre.

In a total of 70 flight hours, the researchers plan to measure not only carbon particles, but also a number of other parameters – including the sea-ice thickness, which is considered an essential indicator of the sea ice’s development. “In the climate system, the extent of the Arctic sea ice isn’t the only consideration; we also need to know exactly how thick it is. Only then will we be able to say whether the sea ice is actually dwindling,” explains Andreas Herber. The measurements will be made using a torpedo-like sea-ice thickness probe called the EM-Bird, which is stored on the underside of the research aeroplane Polar 5 and lowered by winch to a height of 10-15 metres above the sea ice. By combining these measurements with satellite data, the team can estimate the total amount of sea ice.

The airborne campaign will be supplemented by intensive measurement work on the ground, which offers essential reference values for the aerial measurements. Here the researchers will collect e.g. snow samples, to assess their grain size, reflectiveness, and carbon particle concentration. In addition, the ground measurements will include the frequency of aerosol particles, an aspect that influences the formation and freezing of clouds. In order to build a bridge between the ground and airborne measurements, a tethered balloon and drone will be used to take readings up to an altitude of 1,000 metres. “This type of work is especially important in the Arctic, where the complex structure of the local atmosphere means ground measurements alone aren’t enough,” explains Holger Siebert from the Leibniz Institute for Tropospheric Research in Leipzig.

In this year’s PAMARCMiP campaign, for the first time Villum Research Station will serve as the base camp. Located in the furthest reaches of Northeast Greenland, it offers the researchers an essential advantage. According to Andreas Herber: “Here we have the ideal meteorological conditions for our work; it feels like the station is right on the sea ice. On similar campaigns starting from Svalbard, we sometimes had to fly quite a way before we even reached the edge of the sea ice.” That being said, the remote location also poses its fair share of logistical challenges, since there’s no ship or commercial airline to transport the researchers and their equipment to the station.

For further information on the campaign, please visit:
http://www.ac3-tr.de/overview/observations/pamarcmip-2018/

Notes for Editors:
Printable images and graphics are available at: https://www.awi.de/nc/en/about-us/service/press/press-release/surveying-the-arctic-tracking-down-carbon-particles.html