Breaking species barriers by “breeding” mice in a dish 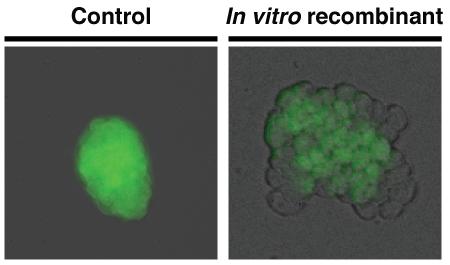 How species differ from each other is a key question in biology. But genetic mapping between species has been challenging because hybrid crosses are typically sterile. Combining latest stem cell and genomic techniques, MPI scientists at the Friedrich Miescher Laboratory, Tübingen, Germany have pioneered in vitro recombination, a technique to circumvent breeding and directly cause gene exchanges in cells. In this way they have mapped differences between mouse species within weeks and created mouse embryos carrying hybrid mosaic genomes, without breeding any live mice.

Since the Antiquity, scientists have long wondered what lies at the root of the difference between species. Today, biologists are able to decode genomes, track genes turning themselves on and off and even move and insert genes from one species to another. Yet, the answer to the question of which gene mutations make, say, a house mouse different from its wild relatives remains stubbornly elusive. This is because genetic analyses like those undertaken a century ago by Mendel required extensive breeding to mix up the genomes. But mixing across species like cross-breeding horses and donkeys tend to only give sterile offspring because encoded into the DNA of every species are many genetic barriers that prevent mixing through hybridization.

Using advanced stem cell techniques and clever genetic manipulations, researchers in the Chan Lab at the Tübingen Friedrich Miescher Laboratory have found a way to shuffle the genomes in hybrid mice. More surprising yet, they have done so entirely in a petri dish, without breeding any animals. The Tübingen team achieved this breakthrough by carefully manipulating cell divisions in hybrid embryonic stem cells with a drug against a gene called Bloom Syndrome that is normally responsible for DNA unwinding. This in turn causes shuffling or mitotic recombinations between the divergent copies of mouse chromosomes from different species.

To show that this technique worked, the FML team investigated the difference between the laboratory Mus musculus musculus mouse and its sister species the Algerian mouse Mus spretus. One known difference is that Mus spretus are much faster at metabolizing a drug called tioguanine, likely due to their copy of a gene called Hprt. The Chan Lab decided to apply the new in vitro recombination technique to recover the gene responsible for metabolizing tioguanine. After having shuffled the hybrid genomes, the Chan Lab used a cell sorter, in which millions of cells were individually measured using an intricate set of lasers, mirrors and detectors in thousandths of a second for their ability to survive by-products of tioguanine breakdown. Then by sequencing the DNA of these cells, the FML team found many more M. spretus copies of Hprt than the Mus domesticus variant among the tioguanine susceptible cells. This was resounding confirmation that in vitro recombination can be used to pin-point species differences.
Most impressively, this whole mapping experiment only took three weeks to perform, about as long as it takes for a single mouse to be born through breeding.

Using stem cells, advanced sequencing, and transgenic techniques, Chan and co-workers have shown the path forward for a completely new type of genetic studies. With this new in vitro recombination technique, gene differences in mammals like mice can be directly mapped in a safe, fast and reliable manner. This technique also removes much breeding, thus helping to reduce the large number of experimental animals. Importantly, the same technique, applied to human cells, has the potential to improve medicine and treatments. By mixing the hybrid genomes, the Tübingen researchers offer new insights into genome function that can lead to advances in our fundamental understanding of species differences and disease.

The Friedrich Miescher Laboratory (FML) was founded in 1969 by the Max Planck Society for the Advancement of Science. It provides outstanding young researchers the opportunity to establish a research group over a period of several years, to realize own ideas, and to start an independent career. Over 50 employees work currently at the FML within four research groups. The FML works closely together with the Max Planck Institutes for Developmental Biology and Biological Cybernetics, all situated at Max Planck Campus in Tübingen.