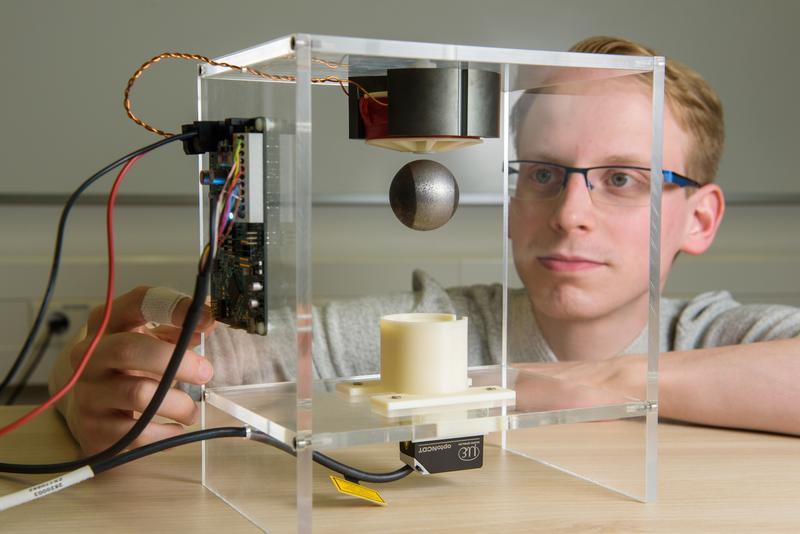 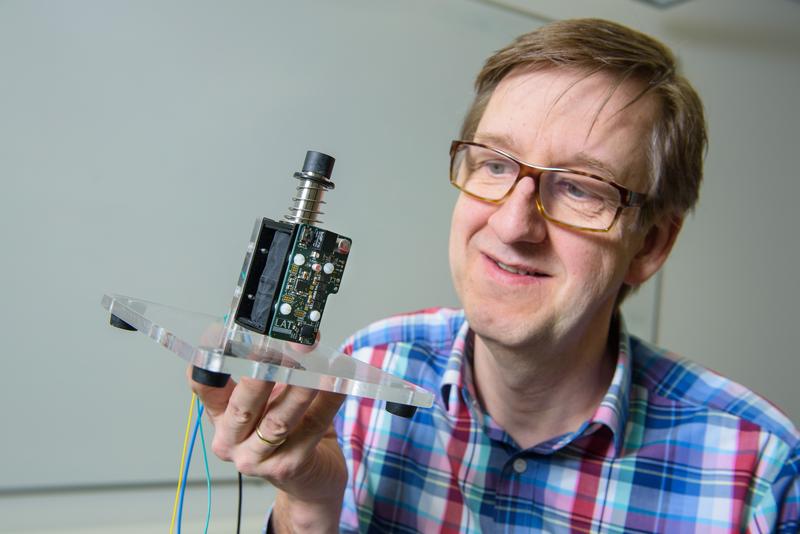 Using a new technique developed by drive systems engineers at Saarland University, electromagnetic valves can precisely control the amount of liquid they dispense and electromagnetic door locks can close smoothly and quietly. All that the engineers in Saarbrücken need is a magnetically permeable metal bolt that moves within a coil of wound copper wire and their sensor-free, patent-pending control methodology. Using this combination, Professor Matthias Nienhaus and his team are able to keep the bolt in any desired position without the need for additional position sensors.

Simply by analysing the electric current that flows through the coil, the team is able to determine where the bolt is and can adjust its position instantaneously.

The research team will be exhibiting their system at Hannover Messe from the 23rd to the 27th of April at the Saarland Research and Innovation Stand (Hall 2, Stand B46) where they will be demonstrating the potential of their sensor-free technology by using it to keep a steel ball levitated.

The electromagnetically controlled valves and locks that are commonly available today are certainly quick acting, but they also tend to have only two operating states: ‘on’ and ‘off’. If, for example, an electromagnetic door lock is energized, the bolt is driven powerfully into the strike plate. When the lock is de-energized, the bolt is retracted by a spring. Getting these devices to do more, such as getting a valve to maintain some intermediate half-open position or requiring a locking bolt to close less abruptly, has, up until now, been a costly exercise involving additional sensors and a complex control system.

A new approach developed by drive systems specialist Professor Matthias Nienhaus and his team at Saarland University now offers a means of achieving greater control of electromagnetic valves and locking devices without the need for additional sensors. With this new technology, the locking bolt can be made to enter the striking plate softly and to precisely maintain any desired intermediate position. The device is no longer simply a two-state system, but can act more like a water tap in which the extent to which the device is ‘on’ or ‘off’ is continuously variable.

The only information that the researchers need is that provided by the electric current that controls the movement of the bolt. ‘We monitor how the current flowing in the coil changes with time. Specifically, we record the fluctuations in the electric current over a certain period of time and analyse them. These current fluctuations change depending on the position of the bolt. This allows us to determine exactly where the bolt is at any particular time. Knowing where the bolt is, means that we have an effective means of controlling its movement,’ explains Matthias Nienhaus.

However, the unprocessed signals that the researchers initially record are far too noisy to deliver any meaningful information about the status of the device. ‘We smooth the raw signals using our new integrating method that is now covered by a patent application,’ explains Professor Nienhaus.

Using their new method, the drive systems engineers in Saarbrücken are able to filter out a clean measurement signal. ‘It’s a little bit like continuously calculating the average velocity when the speed of the car you’re driving is varying from one instant to the next,’ says Nienhaus. The results allow the researchers to precisely determine the position of the bolt within the coil. ‘Our method provides us with a measurement signal that is practically noise free. We use the signal to position the bolt where we need it, and we can even position it a little bit beyond the end of the coil,’ he adds.

The team will be demonstrating just what they mean by ‘high-precision control’ at this year’s Hannover Messe. The demonstration, which involves controlling a steel ball so precisely that it can be made to float up and down in a completely pre-determined manner, not only underscores the team’s engineering prowess, it also shows the potential of the new technology. ‘The demonstration clearly shows the speed and precision of our new control technology. We are effectively juggling a steel ball using nothing more than the device’s own current signal – without the need for any additional position sensors,’ says Matthias Nienhaus.

Press photographs are available at
https://www.uni-saarland.de/aktuelles/presse/pressefotos.html
and can be used free of charge.

Background:
The focus of the research work conducted by Professor Matthias Nienhaus – a drive systems specialist at Saarland University – is smart motors that generate operational data without the need for additional sensors. Nienhaus and his team turn the motor itself into a sensor, essentially creating a new category of sensor. The engineers in Saarbrücken are currently working on a number of research projects in which they are examining how to extract the greatest possible quantity of data from electric motors so that these electric drive systems can be controlled more efficiently. The data is also used to monitor whether a motor is operating properly or whether there are signs that it is beginning to fail or that components are becoming worn.

The Saarland Research and Innovation Stand is organized by Saarland University's Contact Centre for Technology Transfer (KWT). KWT is the central point of contact for companies interested in exploring opportunities for cooperation and collaboration with researchers at Saarland University. http://www.uni-saarland.de/kwt