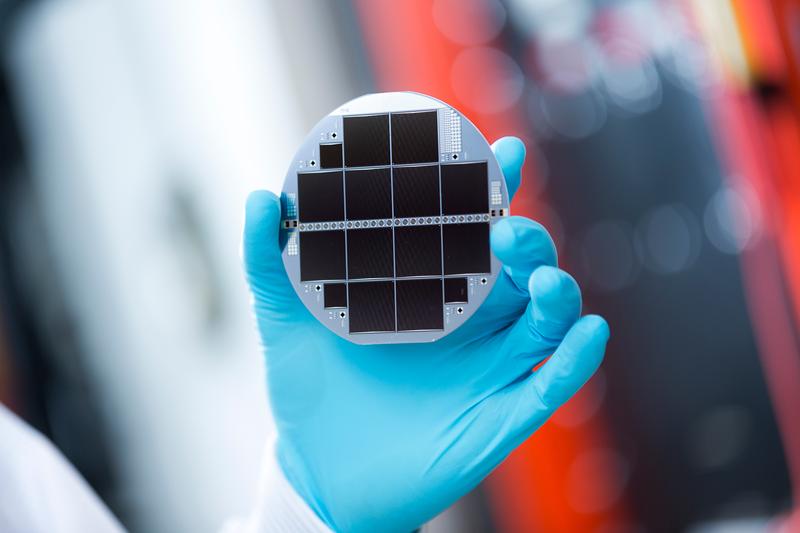 Researchers at the Fraunhofer Institute for Solar Energy Systems ISE together with the company EV Group (EVG) have developed a new silicon-based multi-junction solar cell, which can convert exactly one-third of the incident sunlight into useful electricity. This newest result is now published in the renowned scientific magazine Nature Energy.

Silicon solar cells dominate the global photovoltaic market today with a share of 90 percent. With ever new technological developments, research and industry are nearing the theoretical efficiency limit for semiconductor silicon. At the same time, they are forging new paths to develop a new generation of even more efficient solar cells.

The Fraunhofer researchers achieved the high conversion efficiency of the silicon-based multi-junction solar cell with extremely thin 0.002 mm semiconductor layers of III-V compound semiconductors, bonding them to a silicon solar cell. To compare, the thickness of these layers is less than one twentieth the thickness of a human hair. The visible sunlight is absorbed in a gallium-indium-phosphide (GaInP) top cell, the near infrared light in gallium-arsenide (GaAs) and the longer wavelengths in the silicon subcell. In this way, the efficiency of silicon solar cells can be significantly increased.

“Photovoltaics is a key pillar for the energy transformation,” says Dr. Andreas Bett, Institute Director of Fraunhofer ISE. “Meanwhile, the costs have decreased to such an extent that photovoltaics has become an economically viable competitor to conventional energy sources. This development, however, is not over yet. The new result shows how material consumption can be reduced through higher efficiencies, so that not only the costs of photovoltaics can be further optimized but also its manufacture can be carried out in a resource-friendly manner.”

Already in November 2016, the solar researchers in Freiburg together with their industry partner EVG demonstrated an efficiency of 30.2 percent, increasing it to 31.3 percent in March 2017. Now they have succeeded once again in greatly improving the light absorption and the charge separation in silicon, thus achieving a new record of 33.3 percent efficiency. The technology also convinced the jury of the GreenTec Awards 2018 and has been nominated among the top three in the category “Energy.”

For this achievement, the researchers used a well-known process from the microelectronics industry called “direct wafer bonding” to transfer III-V semiconductor layers, of only 1.9 micrometers thick, to silicon. The surfaces were deoxidized in a EVG580® ComBond® chamber under high vacuum with a ion beam and subsequently bonded together under pressure. The atoms on the surface of the III-V subcell form bonds with the silicon atoms, creating a monolithic device. The complexity of its inner structure is not evident from its outer appearance: the cell has a simple front and rear contact just as a conventional silicon solar cell and therefore can be integrated into photovoltaic modules in the same manner.

The III-V / Si multi-junction solar cell consists of a sequence of subcells stacked on top of each other. So-called “tunnel diodes” internally connect the three subcells made of gallium-indium-phosphide (GaInP), gallium-arsenide (GaAs) and silicon (Si), which span the absorption range of the sun’s spectrum. The GaInP top cell absorbs radiation between 300 and 670 nm. The middle GaAs subcell absorbs radiation between 500 and 890 nm and the bottom Si subcell between 650 and 1180 nm, respectively. The III-V layers are first epitaxially deposited on a GaAs substrate and then bonded to a silicon solar cell structure. Here a tunnel oxide passivated contact (TOPCon) is applied to the front and back surfaces of the silicon. Subsequently the GaAs substrate is removed, a nanostructured backside contact is implemented to prolong the path length of light. A front side contact grid and antireflection coating are also applied.

On the way to the industrial manufacturing of III-V / Si multi-junction solar cells, the costs of the III-V epitaxy and the connecting technology with silicon must be reduced. There are still great challenges to overcome in this area, which the Fraunhofer ISE researchers intend to solve through future investigations. Fraunhofer ISE’s new Center for High Efficiency Solar Cells, presently being constructed in Freiburg, will provide them with the perfect setting for developing next-generation III-V and silicon solar cell technologies. The ultimate objective is to make high efficiency solar PV modules with efficiencies of over 30 percent possible in the future.