Not just housekeeping: A new way to control protein production in stem cells 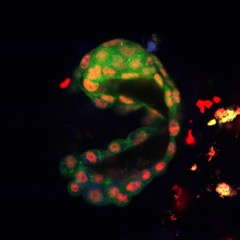 Cells acquire distinct fates and functions during development. A study from the IMBA reveals a new mechanism of cell fate specification involving the regulation of cell metabolism.

Thousands of distinct cell types are needed to build a fully developed newborn. Individual cells take on their identities by switching on distinct sets of genes, producing different sets of RNA and protein molecules. So far, the overall rate of protein synthesis has been regarded as a "housekeeping" activity that does not play a major role in defining cell types. New results from the laboratory of Jürgen Knoblich at the IMBA in Vienna now show this is not quite true. The new data center around a molecule called HTATSF1. The group used embryonic stem (ES) cells, early stage cells that can still build any organ or tissue in an animal or human body. They show that HTATSF1 stimulates protein synthesis in ES cells by increasing the number of ribosomes, the machines that build new proteins within a cell. Surprisingly, this influences the transition of the ES cells from a truly naïve ground state into a more primed transition state where the cells are ready to specialize. The group shows that the same mechanism also controls the early stages of development in a mouse embryo, underlining the significance of this new regulatory pathway. The new work demonstrates that even basic cellular processes are involved when cells diversify into the different building blocks that make up our body. The work was carried out in collaboration with scientists from the MFPL and is published in the current issue of Cell Stem Cell.

A multi-purpose tool to promote the construction of proteins
HTATSF1 influences the production of proteins from a genome at at least three stages. Two of them occur during the steps that transform information in RNA molecules into proteins.
When a gene is transcribed into a messenger RNA, this molecule usually contains extra sequences called introns that have to be removed. This process is called splicing, and it is carried out by a machine called the spliceosome which consists of several molecules. The exact composition of the spliceosome changes depending on the type of cell.
Postdoc Nina Corsini and other members of Knoblich's lab discovered that in embryonic stem cells, HTATSF1 is a component of spliceosomes. Its presence means that the machine removes introns from particular RNAs. After this stage of processing, they are passed along to another machine called the ribosome, which attempts to translate the mRNA into a protein. Without HTATSF1 the introns aren't removed, and the proteins that are produced are defective. The cell usually destroys these molecules before they are used, because they might cause damage. Defects in splicing and a failure to destroy such faulty proteins have been linked to a number of diseases.
The scientists artificially lowered amounts of HTATSF1 in embryonic stem cells to determine how this would affect cells – in other words, which proteins would be malformed. Here they discovered a second means by which HTATSF1 affects the production of the molecules – it is needed to splice proteins that make up the ribosome itself. So HTATSF1 needs to be present for the protein-translation machinery to be built in the first place.
The scientists also discovered a third way the molecule influences protein production. "It also regulates the transcription of the RNA molecules that make up the ribosome, and plays a role in their processing," Corsini says. "Without those RNAs, proteins won't get made, either. So this single molecule steps in at several stages to fine-tune rates of protein synthesis."

Effects on cell differentiation and embryonic development
The ultimate effect of HTATSF1 is to help govern what happens to embryonic stem cells. When the scientists pushed ESCs to produce high amounts of the molecule, they failed to start down the paths of specialization needed to form the major tissues of embryos.
The study is the first to show that this type of control of protein synthesis is important in controlling the fates of embryonic stem cells. Generally, the production of proteins by ribosomes has been regarded as a "housekeeping" activity essential to the lives of all cells.
"We establish an important connection between cells' levels of protein production and a fundamental decision: whether they remain 'pluripotent' stem cells able to take on many fates, or start down a road of development that leads to the specialized tissues of the body," says Juergen Knoblich, IMBA vice scientific director and last author of the study.
One reason the finding is important is that the construction of protein-synthesizing ribosomes is known to be disrupted in a number of diseases. "Those include diverse types of cancer – in which cells become confused about their stem-ness or states of differentiation, and some rare congenital diseases known as 'ribosomopathies,' such as Diamond Blackfan Anemia," Knoblich says.

About IMBA
IMBA - Institute of Molecular Biotechnology is one of the leading biomedical research institutes in Europe focusing on cutting-edge functional genomics and stem cell technologies. The major research fields are: Disease modeling, genetics, stem cell and RNA biology. IMBA is located at the Vienna BioCenter, a vibrant cluster of universities, research institutes, and biotech companies in Austria and is the largest research unit of the Austrian Academy of Sciences, the leading organization promoting non-university academic basic research in Austria.
www.imba.oeaw.ac.at