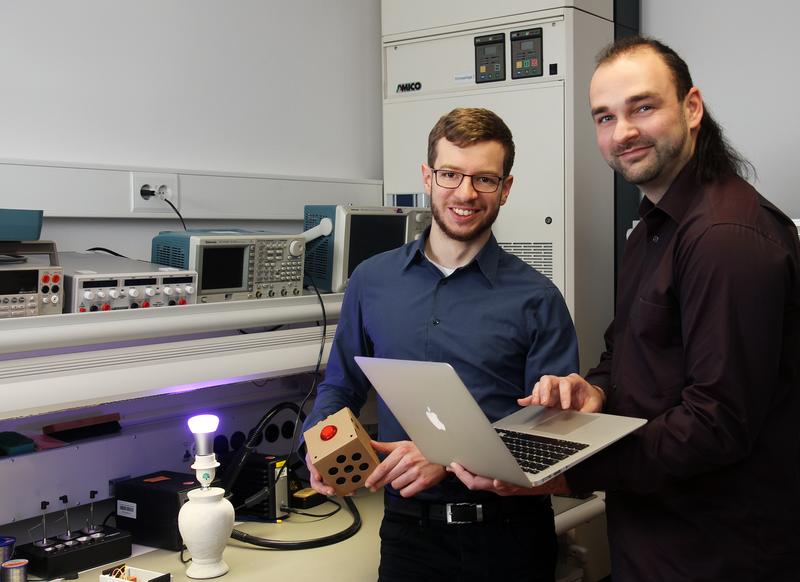 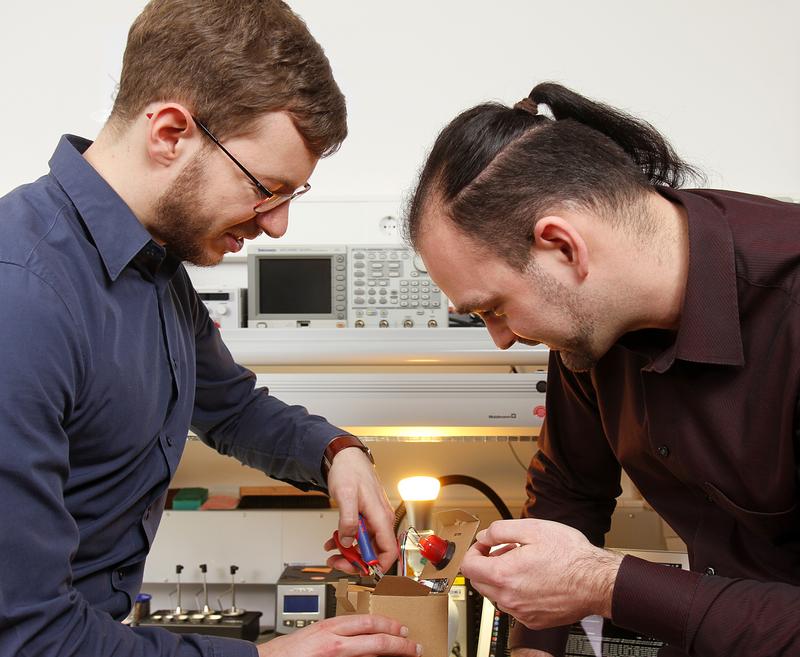 The system is designed so that the user retains control of who can control and use the devices. | Quelle: Credit: TUK/Thomas Koziel | Download
❮ ❯

Refrigerators, dishwashers or cars – more and more devices that we use on a daily basis are being connected over the Internet-of-Things and thus can exchange data. Computer scientists at the Technische Universität Kaiserslautern (TUK) are working on making it simpler to connect devices made by different manufacturers. The system is designed so that the user retains control of who can control and use the devices. This involves the use of a microcomputer that connects devices in a manner similar to an adapter. The scientists will present their system at the Hannover Messe from 23 to 27 April at the Rhineland-Palatine State research booth (Hall 2, Booth B40).

The Internet-of-Things (IoT) is growing exponentially: for example, a presentation by the American design company "Infografic Design Team" predicts that spending for this technology in the medical sector will increase by 15% to reach 117 billion dollars by the year 2020. The increase is expected to be fivefold to 25 billion dollars for networked mobile devices.

Also at TUK, researchers Christopher Heinz and Johannes Kölsch are also working on this technology at the Chair for "Design of Cyber-Physical Systems" with Professor Dr. Christoph Grimm. The specifics: together with colleagues from across Europe, these researchers are developing a software system that connects devices and machines made by different manufacturers. Experts also describe this as interoperability. "This term denotes the ability for technical systems produced by different manufacturers to communicate with each other and recognize different signals", explains phd student Heinz.

The technology works similar to an adapter that people use to connect a power plug from overseas into a socket with a different shape. Researchers use a commercially-available microcomputer that comes in a plain cardboard box. "This is what is known as a Voice Kit", notes Kölsch, who is also studying towards a doctorate at the Chair. "It consists of a single-board computer and artificial intelligence that is fitted with voice control as well as other sensors that can measure and detect light intensity and temperature."

Via a wireless network connection known as "ZigBee" that functions in the same way as the more common WiFi, the microcomputer is connected to a device, for example a lamp or coffee machine. The tiny computer itself is connected to a cloud or online storage. All important data and functioning of the device are stored in this repository. "We are also connected with our project partners, whose devices can also be controlled from the cloud using similar technology", explains Heinz. It is therefore possible to use voice commands and have research colleagues in Greece turn on and off the lights on the Kaiserslautern campus.

With this system, the user retains control over who can control and use the devices. "The user decides who has access. Data transfer between sender and recipient takes place in encrypted form according to the latest security standards", says Kölsch.

The technology is not just for private homes. It can also make it easier for energy suppliers to control electricity distribution, for example. "This may be important in the early evening, when energy demands suddenly rise and the grid are overburdened", explains Kölsch. A regular unit can manage the demand and reduce it in certain areas on demand. Power grid operators have similar agreements already in place with supermarkets, for example. They receive cheaper electricity if they are prepared to dim the lights by ten percent during periods of high demand on the grid.

Further, companies can link the equipment in their factories, transport services can network display boards at stops with busses and trains or hospitals can link key medical equipment. Another application is in the supply of larger building complexes, which could thus control heating, air conditioning, ventilation and lights more simply.

The work is taking place as a part of the "VICINITY" project, which received 7.5 million euros in funding support from the European Union. The project is coordinated by Professor Grimm in Kaiserslautern and there are 16 partners from around Europe. The researchers will present the project at the Hannover Messe.