All the colours of the rainbow 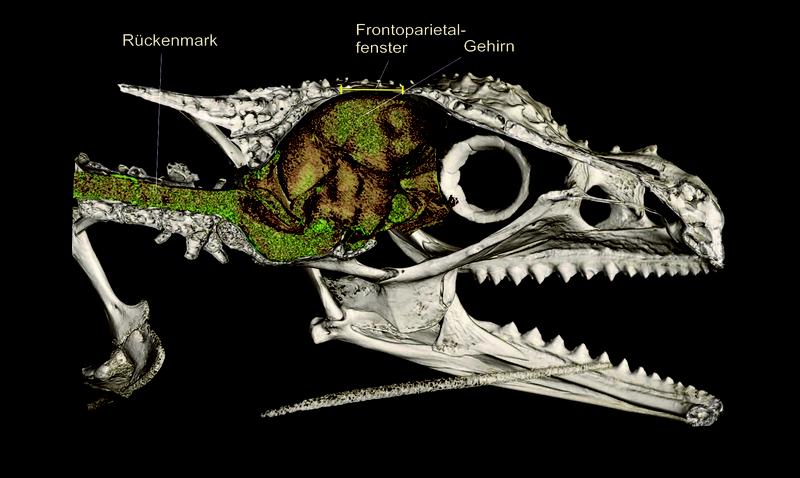 The brain of Calumma gehringi is visualised by micro-CT scan within the skull, revealing its position below the so-called ‘frontoparietal fenestra’, the function of which remains unclear. | Quelle: Image: David Prötzel (ZSM/LMU) and Mark D. Scherz (ZSM/LMU) | Download 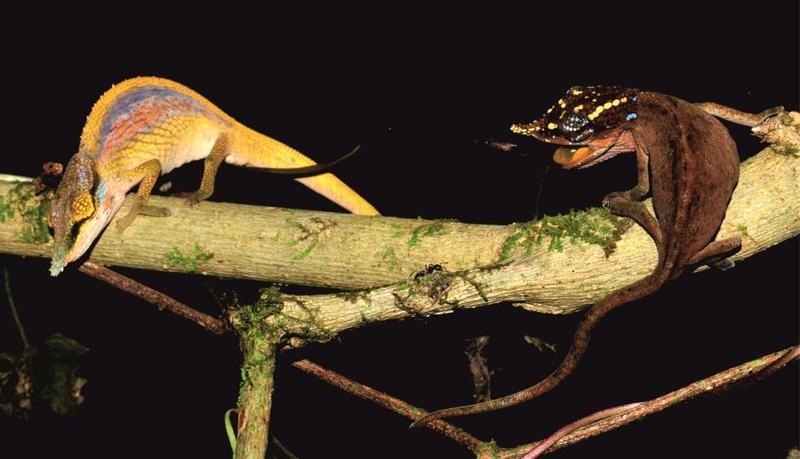 When a male Calumma uetzi meets an unreceptive female: While the male puts on a show of colour, the female darkens, develops contrasting patterns on her head and threatens the male with open mouth. | Quelle: Photo: Frank Glaw (SNSB-ZSM). | Download
❮ ❯

Madagascar is a chameleon paradise. More than 40% of the 206 known species are found exclusively on the island. A team of researchers based in Munich, Germany and Madagascar have now discovered three new species, among them a beautifully coloured rainbow chameleon, and a species with a large hole in the top of its skull. The three newly described species are all restricted to very small ranges, and are probably highly threatened. The research was published in the Zoological Journal of the Linnean Society.

The diversity of Madagascar is unique. More than 420 reptile species are already known from this enormous island off the east coast of Madagascar, yet rainforested mountains across the island continue to yield new surprises: On an expedition carried out by the Zoologische Staatssammlung Munich in a remote area of northern Madagascar, a team of researchers has discovered a spectacularly coloured rainbow chameleon, now dubbed Calumma uetzi. The gorgeous display colouration of the new species, which makes it easily distinguishable from all other species, is at its most magnificent when individuals of both sexes encounter one another. Then, the male tries to impress the female with a raucous display of yellow, violet, and red. Yet these flashy colours alone are no guarantee of success; an unreceptive female will turn on a male, mouth agape, darkening her own skin to the point of nearly black.

While the new rainbow chameleon is found only in the relatively remote forests of the north of Madagascar, a second new species was discovered in a dwindling forest fragment just beside one of the island’s most heavily travelled roads. This totally isolated forest fragment, which covers an area of scarcely 15 hectares, is the only known forest in which Calumma juliae occurs. “We hope,” says David Prötzel, a PhD student at LMU and lead author of the new study, “that this area can be protected as soon as possible. Recent imagery from Google Earth shows that, since our discovery of this chameleon just two years ago, a significant area of its tiny home has already been lost to deforestation.” Despite repeated visits by the researchers to the forest where this species is at home, only females have yet been found. “It will be really interesting to see what the males look like, and at what time of the year they can be found,” says Prötzel.

Only a single, male specimen of the third species described in the new study, Calumma lefona, is known. X-ray micro-CT scanning of the head of this specimen revealed a large hole in the roof of the skull, lying directly over the brain. A systematic search among the related chameleons revealed that a hole is present in this position in at least six other Calumma species. Curiously, the species with these holes all occur at elevations of more than 1000 m above sea level. The biological function of this skeletal anomaly is something of a mystery, but the researchers think it may help in thermoregulation.

“Based on everything we know about these species, they all have very small distribution ranges,” says Dr. Frank Glaw, who heads the Herpetology Section of the Zoologische Staatssammlung München, ”but many new protected areas are now being established in Madagascar, which will certainly be important for the future of Madagascar’s unique diversity.”