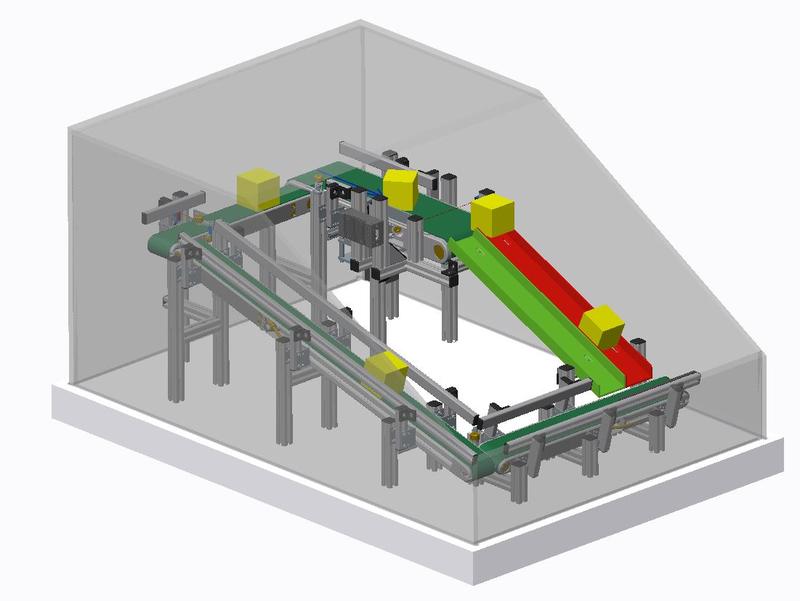 Fraunhofer IAF’s exhibit at this year's Hannover Messe shows the use of radar in process automation. Here you can see the 3D model. | Quelle: © Fraunhofer IAF | Download 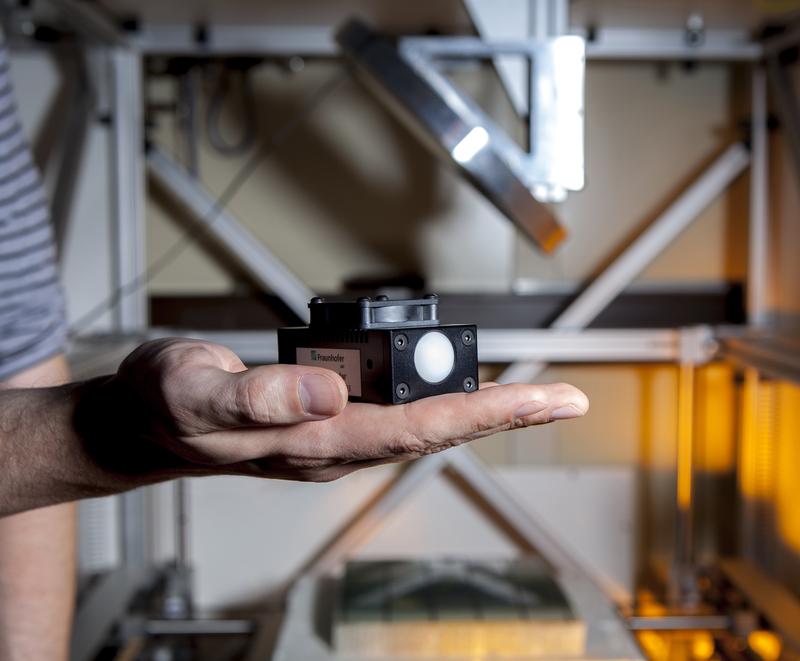 The compact w-band radar is about the size of a cigarette box. | Quelle: © Fraunhofer IAF | Download
❮ ❯

See what is hidden from the human eye. Preserve the view when optical sensors fail. Radars make the invisible visible. Based on millimeter waves penetrating plastics, cardboard, wood and textiles, they are able to see what's inside packaging, behind walls or behind smoke and fog. Researchers at Fraunhofer IAF have taken advantage of the unique characteristics of millimeter-waves and have developed a compact W-band radar module that is ideally suited for use in industrial sensors: It screens packaged goods and gives precise information about their contents. The Fraunhofer researchers are going to present the use of this radar in an industrial environment from April 23 to 27 at the Hannover Messe. They will be located at booth C22 in Hall 2, showcasing their radar in the frame of the Research Fab Microelectronics Germany.

With the help of intelligent and digitally networked systems, modern industrial production is becoming increasingly self-organized and self-reliant: people, machines, plants, logistics and products communicate and cooperate with one another and thus optimize individual production steps or even the entire value chain. This vision of Industry 4.0 includes systems that independently make decisions based on the data available to them and perform tasks as autonomously as possible. The W-band radar developed by the Fraunhofer Institute for Applied Solid State Physics IAF in Freiburg takes industrial automation one step further. The radar inspects packed goods for content and completeness. Based on the results, the system can automatically sort out faulty deliveries of goods before shipping.

The W-band radar developed by Fraunhofer IAF works with millimeter-waves at frequencies of 75 to 110 GHz, the so-called W-band. The emitted millimeter waves penetrate all non-metallic and optically non-transparent materials such as plastic, textiles, paper, wood or even dust, smoke and fog.

Take a look inside

So far, optical sensors such as lasers are mostly used for presence detection in the production process. The disadvantage is that lasers fail in poor visibility conditions and cannot look behind packaging material. The W-band radar, on the other hand, does not only provide high-precision distance measurements in dust, smoke or fog; it even allows a view behind materials and objects. Like an X-ray machine that allows you to look into the human body, the radar detects what is inside a package or behind a wall. In contrast to X-rays, however, the short-wave rays emitted by the W-band radar in the millimeter range are not harmful to health. The transmission power of the radar is even 100 times smaller than that of a mobile phone.

The combination of the unique properties of millimeter- waves and the compact radar module developed by Fraunhofer IAF offers a wide range of applications beyond industrial sensors. »Radar can be used wherever contact-free material testing, control of packaged goods or high-precision distance measurements under difficult conditions such as restricted visibility are required« says Christian Zech, researcher at Fraunhofer IAF. The institute has already launched several projects, including safety aspects in human-machine interaction, the use of radar in the harsh environment of a steelwork, and safe landing assistance for helicopters.

The operation of the radar can be compared to that of an echo. The radar emits signals that are reflected by materials and objects. Transmit and receive signals are compared using numerical algorithms and provide information about what is in front of the radar module at what distance. »Despite their advantages, millimeter-wave radar systems have received little market acceptance so far, since low-frequency systems are too large and the production of high-frequency systems is too expensive, « explains Zech. The development of the Fraunhofer researchers, on the other hand, is compact, cost-effective and has a modular design. Due to the shorter wavelengths of around three millimeters, the entire system is only about the size of a cigarette box. The researchers have succeeded in developing a cost-efficient printed circuit board (PCB)-based assembly and interconnecting technology. »Our W-band radar is based on the semiconductor gallium arsenide, providing higher bandwidth, resolution, sensitivity and ruggedness than radar systems operating on silicon circuits. This is crucial for many applications« explains Benjamin Baumann, electrical engineer at Fraunhofer IAF.

Take a look at the IAF radar at the Hannover Messe

The researchers are going to present the use of the W-band radar as one element of process automation at the Hannover Messe at the joint Fraunhofer stand in Hall 2, booth C22 in the frame of the Research Fab Microelectronics Germany. The exhibit shows an industrial hall where packaged goods are transported on production lines. The radar screens the packages passing by and checks their contents. Incorrect or incomplete packaging is reported and immediately removed from the logistics chain.