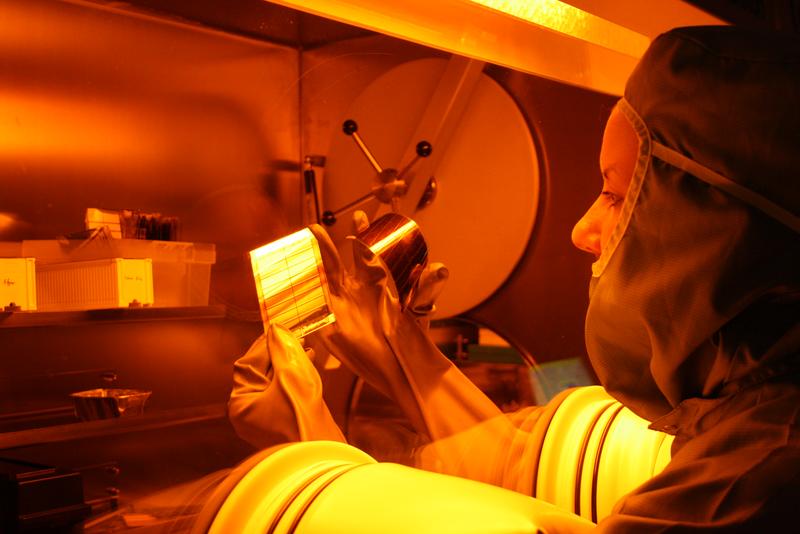 New inks for inkjet printers make it possible to print organic displays or solar cells on film and glass for the use in architecture, the textile industry and many other industries. These and other application examples of printed electronics will be presented by the Fraunhofer Institute for Applied Polymer Research IAP at Printed Electronics Europe in Berlin from April 11 to 12, 2018.

They turn light into electricity or vice versa: the inkjet inks developed by researchers at the Fraunhofer IAP can be printed on solid substrates as well as on flexible foils. In effect, solar cells and organic displays can be produced fast and cost-effectively.
Together with research partners, the Fraunhofer scientists have developed methods to print organic photovoltaic elements for use in architecture and for the textile industry on film. With a solar module as façade element and a power-generating jacket, they present the potential of their work at the fair.

Also for displays, printing processes are utilized at the Fraunhofer IAP. Using specially developed inks from organic light sources and quantum dots, the researchers print, for example, organic light-emitting diodes (OLEDs) and quantum dot-based LEDs (QLEDs). The displays can also be printed on different materials. Printing on film makes them flexible to some degree. "Until we can flexibly roll up our televisions, we still have a little research to do", explains Dr. Armin Wedel, head of the research division Functional Polymer Systems at the Fraunhofer IAP. "Although there are already curved and even scrollable displays, they still have to be rolled up on rigid rolls with a defined diameter," says the OLED specialist.

New perspectives for the production of printed displays result from the use of ESJET printing (electrostatic printing). The scientists at the Fraunhofer IAP are working on this procedure together with twelve other partners within the project Hi-Response, which is funded by the European Union.
The ESJET printing process allows the use of a wider range of inks, as even very viscous inks can be processed. The drop-on-demand system also makes it possible to set the thickness of the printed layer very precisely. The printed structures can be as small as 1 micron. In the future, the printing of high-resolution, active-matrix-driven OLEDs should be possible.

Quantum materials for the display industry

In addition to OLEDs, the IAP scientists are also researching QLEDs based on indium phosphide quantum dots. They are free of conventionally used toxic cadmium. The results so far are groundbreaking for the industry. Indium phosphide-based QLEDs are gradually catching up on the performance advantage of cadmium-based systems in many areas. Regarding luminance, they are already outperforming cadmium-based QLEDs.
Dr. André Geßner presents the research results in his presentation:

Solar powered LED illuminated bike jacket | This project has received funding from BMBF within the framework of the project EPOS, BMBF FKNZ 03EK2529.

Photovoltaics as a substitute for ITO electrodes | This project has received funding from the European Union‘s H2020-NMP-PILOTS-2014 programme under grant agreement No. 646296).

ELQ-LED | This project was funded by the BMBF under grant number 13N14421.

The Fraunhofer Institute for Applied Polymer Research IAP in Potsdam-Golm, Germany, specializes in research and development of polymer applications. It supports companies and partners in custom development and optimization of innovative and sustainable materials, processing aids and processes. In addition to the environmentally friendly, economical production, functionalization and processing of polymers in the laboratory and pilot plant scale, the institute also offers the characterization of polymers.
Synthetic petroleum-based polymers as well as biopolymers, polymers from renewable raw materials and chemically, physically or biologically functionalized polymers are in the focus of the institute’s work. The applications are diverse, ranging from biotechnology, medicine, pharmacy and cosmetics to electronics and optics as well as applications in the packaging, environmental and wastewater engineering or the aerospace, automotive, paper, construction and coatings industries. | Director: Prof. Dr. Alexander Böker