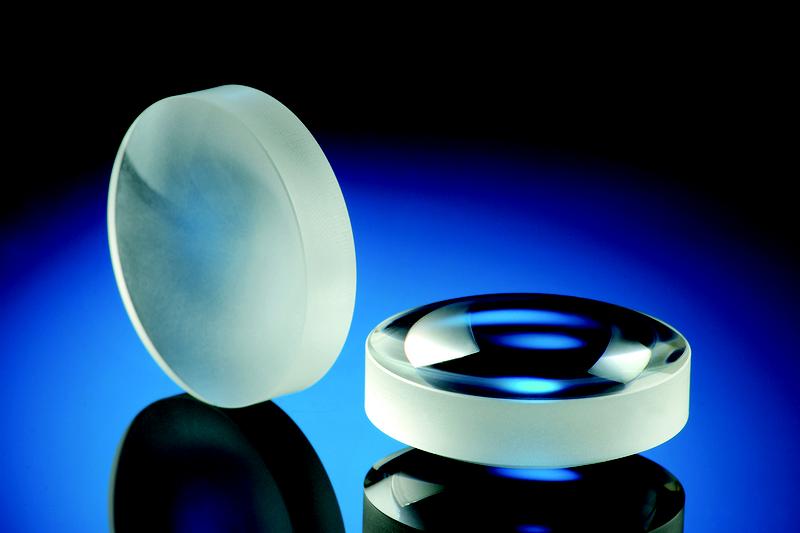 The LBF process is particularly suitable for the correction of non-spherical optics in small to medium quantities. | Quelle: © Fraunhofer ILT, Aachen, Germany. | Download

After having developed laser polishing, the Fraunhofer Institute for Laser Technology ILT in Aachen has now also developed an ablative process for the ultra-precise machining of optics. Laser Beam Figuring (LBF) enables an ablation of less than 5 nm. For the first time, a complete process chain for the laser-based optics production has been made possible.

Thanks to their good imaging properties, aspheres are the dream of many optical designers. Aspheres have one great disadvantage, however: mechanical processing, which is much more time-consuming than for conventional spherical optics. And for a high surface quality, a special post-treatment is often necessary.
Laser polishing is a first step towards simplifying this surface finishing issue. In laser polishing, the glass surface is heated with CO2 laser radiation to just below the evaporation temperature. The viscosity of the surface sinks, the roughness flows out and the surface is smoothed. This way, the micro-roughness can be improved quickly.
For periodic structures with a wavelength of more than 100 μm, which can occur during mechanical processing, laser polishing is not enough. This requires ultra-precise ablation processes.

For ultra-precision machining with a few nanometers’ removal, Ion Beam Figuring (IBF) and Magnetorheological Finishing (MRF) have been the methods of choice. The experts at Fraunhofer ILT have now developed a laser-based method that can work more accurately and faster.
In Laser Beam Figuring (LBF), a pulsed CO2 laser removes glass material from the surface. The ablation rate can be precisely controlled by regulating the pulse duration. The lateral resolution of the ablation is essentially determined by the size of the laser spot. For example, a vertical resolution of less than 5 nm and a lateral resolution of less than 100 μm are possible during ablation.
Unlike the IBF, the LBF process does not require a vacuum; nor does it need any additional fluids, unlike MRF. At the same time, LBF enables maximum flexibility in shaping, as the non-contact process works on surfaces of almost any shape.

With LBF, Fraunhofer ILT has created the first continuous laser-based process chain in optical production. In a first step, the material is removed relatively coarsely for an individual shape. Then the surface is polished with the laser. For the final shape correction then the LBF is used.
Thanks to its speed and flexibility in surface design, the LBF process is particularly well suited for cost-effective shape correction of non-spherical optical components in small to medium quantities. In addition to aspheres, micro-optics can also be processed. The laser shape correction can be combined with both laser polishing and conventional machining methods.
The work has been funded by the Federal Ministry of Education and Research (BMBF), among others, as part of the RapidOptics project under grant number 13N13294.
Fraunhofer ILT will be presenting the LBF process and other laser-based technologies for optical production from May 15 to 17 at Optatec in Frankfurt. You will find the Fraunhofer Joint Stand F14 in Hall 3.0.