An atomic quantum bit made switchable 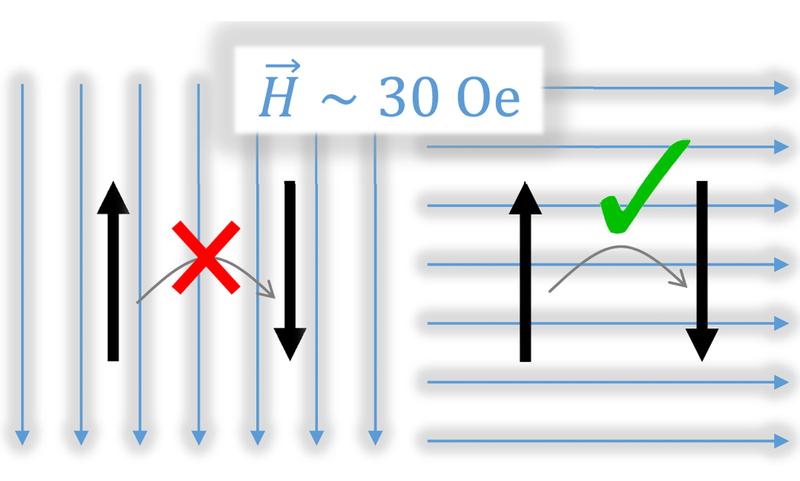 One bit per atom: Augsburg-based physicists and US colleagues are reaching the ultimate limit for nanoscale data storage

Augsburg/AJ/KPP/TT – The increasing miniaturisation of electronic circuits and storage media is progressing steadily. But how small can you actually make a ‘bit’ of information? Is a single atom sufficient to write 0 and/or 1 and freeze its state? The magnetic moment of single atoms or of small clusters actually makes this possible. It acts like a tiny bar magnet, which allows only two possible orientations: Either the north magnetic pole is pointing upward or downward. Between both states there is a high energy barrier, which makes it difficult to switch and prohibits orientations in the middle.

But now quantum mechanics allows a shortcut: Instead of laboriously climbing over the energy barrier, you can simply tunnel through it. However, there are some things to keep in mind: The energies of the two states such a tunnelling process is taking place between must be exactly the same, which is also called degeneracy. With an externally applied magnetic field, this can be cancelled, blocking the tunnel path. This freezes the orientation of the magnetic moment.

This can be achieved even with very small magnetic fields, which is demonstrated in the results of the junior research group with the Augsburg physicist Dr. Anton Jesche (Chair of Experimental Physics VI/EKM), which have now been published in an article in the journal Physical Review Letter. Together with colleagues from the University of Central Florida and the Ames National Laboratory, they examined quantum tunnelling of the magnetisation of individual iron atoms, which were introduced into a crystalline matrix of lithium nitride. The fact that quantum tunnelling can be lowered in magnetic fields has been known for some time and has been intensively studied on socalled molecular magnets. However, a very strong magnetic field in the range of one Tesla had to be generated in order to have a noticeable effect on the magnetic bit's ability to switch. In contrast, less than half a percent of this value is sufficient to completely suppress the tunnel effect in the newly developed iron system. “Even with a simple coil that you can wrap around your little finger, you can create a field of this size,” reports Jesche, “but above all, it can be switched on or off almost instantaneously, i.e. without the slightest time lag.”

This extraordinary behaviour is based, on one hand, on the low defect density of the crystals grown in Augsburg. On the other hand, the chemical environment plays a key role: The iron atoms are only held in place by their two nearest neighbours. As a result, this generates a high anisotropy, i.e. a high directional dependence of the atomic properties, which prevents accidental reversal of the magnetic moments.

Freezing the magnetic moment or flipping it

But they have not only been successful in suppressing the quantum mechanical tunnel effect, the opposite has also proved possible: If the external magnetic field is applied in certain directions, i.e. perpendicular to the imaginary line between the iron and its two neighbouring atoms, the tunnelling rate can even be significantly increased. You can either freeze the magnetic moment or encourage it to flip in a specific direction.

10 Kelvin above absolute zero – easy to achieve in technical terms

With one bit per atom, this seems to be the ultimate limit for nanoscale data storage. “In principle, it is also possible to carry out mathematical operations with these states,” says Jesche, “although we still have a long way to go before we get to a possible quantum computer.” In any case, however, the relatively high temperatures at which the transition from conventional behaviour to quantummechanical behaviour develops are already promising: 10 Kelvin above absolute zero can achieved quite easily in technical terms; it is more than a hundred times higher than in current computer architectures based on superconducting quantum bits.
_______________________________________