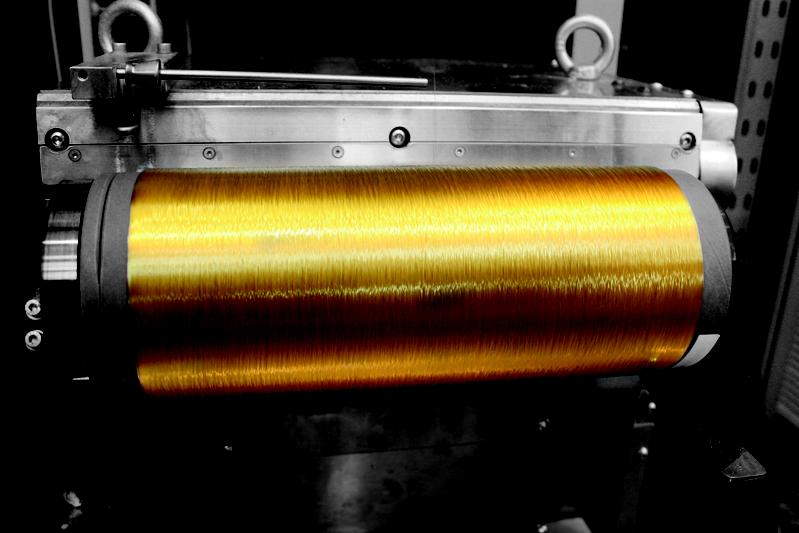 The ComCarbon® technology from the Fraunhofer Institute for Applied Polymer Research IAP will make it possible in the future to produce carbon fibers at low cost for the mass market. The institute will present this new technology at the leading aerospace trade fair, the ILA Berlin 2018, from April 25 – 29. Examples of applications for polymer-based lightweight construction and function-integrated plastics will also be presented.

Whether in airplanes, racing cars, high-performance yachts or bicycles - carbon fibers are the most advanced reinforcement fibers used to produce extremely lightweight composites. Nevertheless, penetrating mass markets, like the automotive, construction and other industries, which currently use glass and natural fibers, remains difficult. One of the main reasons is the high production costs of today's carbon fibers. A significant price reduction could contribute to a substantial increase in the use of carbon fibers in these sectors.

About half the cost of producing conventional carbon fibers is incurred in producing the precursor, the polyacrylonitrile fiber (PAN). This so-called precursor fiber cannot be melted and is therefore produced using an expensive solution spinning process. “We have developed an alternative PAN-based precursor technology that saves around 60 percent of the precursor costs. It is based on an inexpensive melt spin process using special, meltable PAN co-polymers that we developed especially for this purpose”, explains Professor Johannes Ganster, who heads the Biopolymers research division at the Fraunhofer IAP. “Once they are converted to an unmeltable state, these cost-effective precursor fibers can then be processed into carbon fibers in the same way as conventional precursors using the established production routes”, says Ganster.

There are several reasons why melt spinning has an enormous economic and ecological advantage over solution spinning. For one thing, it does not use any environmentally harmful solvents that have to be recycled at great expense. Eliminating solvents means that 100 percent of the melted material can be spun, which enables significantly higher spinning speeds.

Light-weight design plays an important role in more than just carbon fibers at the Fraunhofer IAP. Its scientists will present a section of an aircraft engine inlet made of fiber-reinforced plastic at the booth they will share with the Business Development Department of the state of Brandenburg, located in hall 3, booth 403c. Development focuses on microwave technology as an alternative curing method for composites. Curing in a microwave oven is faster and, above all, gentler on components than in a conventional oven.

The Fraunhofer IAP is also focusing its research on integrating special functionalities, such as biochemical and biosensory functions, identification features, sensors, photovoltaics or lighting elements, into plastics. Professor Alexander Böker, head of the Fraunhofer IAP, will delve into current projects and new developments in his presentation.


The Fraunhofer Institute for Applied Polymer Research IAP in Potsdam-Golm, Germany, specializes in research and development of polymer applications. It supports companies and partners in custom development and optimization of innovative and sustainable materials, processing aids and processes. In addition to the environmentally friendly, economical production, functionalization and processing of polymers in the laboratory and pilot plant scale, the institute also offers the characterization of polymers.
Synthetic petroleum-based polymers as well as biopolymers, polymers from renewable raw materials and chemically, physically or biologically functionalized polymers are in the focus of the institute’s work. The applications are diverse, ranging from biotechnology, medicine, pharmacy and cosmetics to electronics and optics as well as applications in the packaging, environmental and wastewater engineering or the aerospace, automotive, paper, construction and coatings industries. | Director: Prof. Dr. Alexander Böker