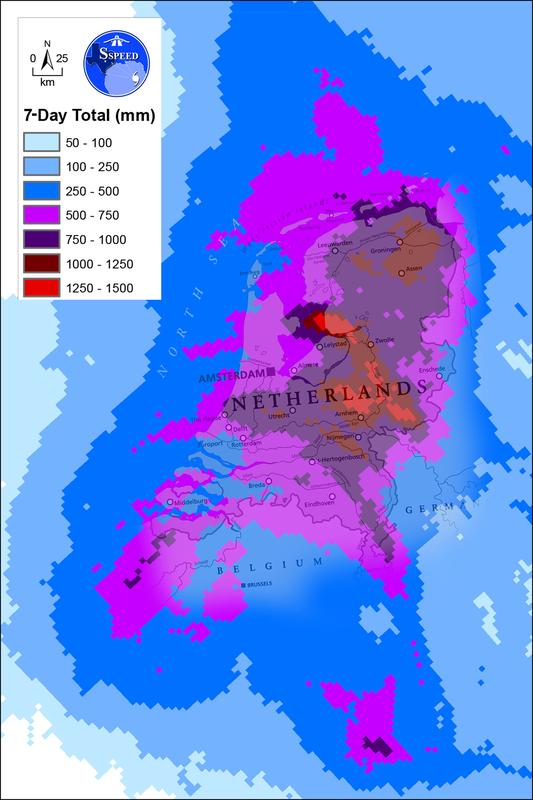 Harvey rainfall map overlaid onto a map of the Netherlands to illustrate the size and extent of the flooding | Quelle: SSPEED Center/Rice University | Download

A Dutch-Texan team found that most Houston-area drowning deaths from Hurricane Harvey occurred outside the zones designated by government as being at higher risk of flooding: the 100- and 500-year floodplains. Harvey, one of the costliest storms in US history, hit southeast Texas on 25 August 2017 causing unprecedented flooding and killing dozens. Researchers at Delft University of Technology in the Netherlands and Rice University in Texas published their results today in the European Geosciences Union journal Natural Hazards and Earth System Sciences.

“It was surprising to me that so many fatalities occurred outside the flood zones,” says Sebastiaan Jonkman, a professor at Delft’s Hydraulic Engineering Department who led the new study.

Drowning caused 80% of Harvey deaths, and the research showed that only 22% of fatalities in Houston’s 4,600-square-kilometre district, Harris County, occurred within the 100-year floodplain, a mapped area that is used as the main indicator of flood risk in the US.

Flood zones, or floodplains, are low-lying areas surrounding rivers and streams that are subject to flooding. To assess flood risk for insurance purposes and to set development standards, US authorities outline floodplains for 100- and 500-year floods. These events have a 1% probability (100-year flood) and a 0.2% probability (500-year) of occurring in any given year.

“Hurricane Harvey was much larger than a 100- or 500-year flood, so flooding outside of these boundaries was expected,” says Jonkman. Rainfall totals in the week after the hurricane made landfall were among the highest recorded in US history, with over 1000 mm of rain falling in just three days in large parts of both Harris and surrounding counties. As a result, a report by Delft University found that “unprecedented flooding occurred over an area the size of the Netherlands.”

Nonetheless, it was surprising for the researchers to find that so many of Harvey’s fatalities happened outside the designated floodplains given that these zones are expected to be “reasonable predictors of high-risk areas,” according to Jonkman.

The research began within days of the storm: “We wanted to identify lessons that could be learned, for both Texas and the Netherlands, from Harvey’s impact and the local and government response to the flooding,” says study co-author Antonia Sebastian, a postdoctoral research associate at Rice University’s Severe Storm Prediction, Education and Evacuation from Disasters (SSPEED) Center, who was based at Delft University when Harvey struck.

The team compiled a database of fatalities, using official government records and media sources, which they analysed in the Natural Hazards and Earth System Sciences study published today. They concluded that at least 70 deaths occurred as a consequence of Hurricane Harvey, including 37 in Harris County. Of the Harris County deaths, eight were in the 100-year floodplain, 10 more fell within the larger 500-year floodplain, and 19 were recovered outside the 100- and 500-year zones. “The number of fatalities outside of the floodplains highlights how widespread flooding from Harvey really was,” says Sebastian.

The new study also shows that most fatalities – over 80% – were drownings, many occurring either in vehicles or when people were swept away while trying to get out of their cars. Six people died when their boat capsized during a rescue. The second largest causes of death were electrocution and lack of medical treatment, responsible for 6% of fatalities each.

About 70% of those killed by Harvey were men. The team thinks the reason behind the high percentage of male fatalities could be that men tend to show more risk-taking behaviour, such as driving through flooded crossings or taking part in rescues.

The researchers hope their findings encourage authorities to identify high risk areas outside of the designated floodplains and to take preventive measures to reduce the number of victims in future floods, including closing low water crossings and underpasses during extreme flood events.

Jonkman says that the current flood maps will need to be improved, but that floodplains should not be abandoned as an indicator of high-risk areas. “Better communication of their purpose and limitations would help reduce risk.”

Please mention the name of the publication (Natural Hazards and Earth System Sciences) if reporting on this story and, if reporting online, include a link to the paper (https://doi.org/10.5194/nhess-18-1073-2018) or to the journal website (https://www.natural-hazards-and-earth-system-sciences.net).

MORE INFORMATION
This research is presented in the paper ‘Brief communication: Post-event analysis of loss of life due to hurricane Harvey’ to appear in the EGU open access journal Natural Hazards and Earth System Sciences on 19 April 2018.

The scientific article is available online, free of charge, from the publication date onwards, at https://doi.org/10.5194/nhess-18-1073-2018. A pre-print version of the final paper is available for download at https://www.egu.eu/news/401/hurricane-harvey-dutch-texan-research-shows-most-fatalities-occurred-outside-flood-zones/ (scroll down to the Media section)

The European Geosciences Union (EGU) is is Europe’s premier geosciences union, dedicated to the pursuit of excellence in the Earth, planetary, and space sciences for the benefit of humanity, worldwide. It is a non-profit interdisciplinary learned association of scientists founded in 2002 with headquarters in Munich, Germany. The EGU has a current portfolio of 18 diverse scientific journals, which use an innovative open access format, and organises a number of topical meetings, and education and outreach activities. Its annual General Assembly is the largest and most prominent European geosciences event, attracting over 14,000 scientists from all over the world. The meeting’s sessions cover a wide range of topics, including volcanology, planetary exploration, the Earth’s internal structure and atmosphere, climate, energy, and resources. The EGU 2019 General Assembly is taking in Vienna, Austria, from 7 to 12 April 2019. For more information, please check http://media.egu.eu closer to the time of the event, or follow the EGU on Twitter (@EuroGeosciences) and Facebook (EuropeanGeosciencesUnion).

If you wish to receive our press releases via email, please use the Press Release Subscription Form at http://www.egu.eu/news/subscribe/. Subscribed journalists and other members of the media receive EGU press releases under embargo (if applicable) at least 24 hours in advance of public dissemination.

Natural Hazards and Earth System Sciences (NHESS) is an interdisciplinary and international journal dedicated to the public discussion and open-access publication of high-quality studies and original research on natural hazards and their consequences. Embracing a holistic Earth system science approach, NHESS serves a wide and diverse community of research scientists, practitioners, and decision makers concerned with detection of natural hazards, monitoring and modelling, vulnerability and risk assessment, and the design and implementation of mitigation and adaptation strategies, including economical, societal, and educational aspects.

Weitere Informationen:
http://doi.org/10.5194/nhess-18-1073-2018 (the link will be active after the study is published on 19 April, 07:00 CET) –Scientific Paper
http://www.natural-hazards-and-earth-system-sciences.net – Journal: Natural Hazards and Earth System Sciences