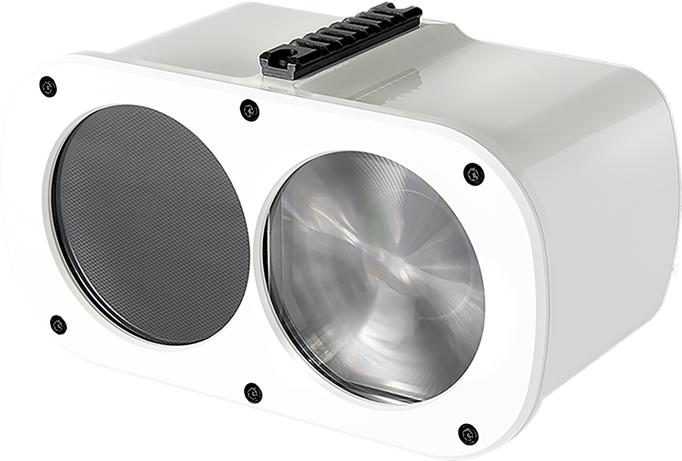 In recent years, Fraunhofer HHI has developed an optical wireless communication (OWC) technology, also known as Li-Fi. Now, industry partner Sangikyo Corporation, a Japan-based telecommunications system company, has launched the first Li-Fi product – the LED Backhaul®. This is an LED-based optical link that is initially introduced as a 4K/8K Video Relay, which can achieve data rates between 100 and 750 megabits per second.

Fraunhofer HHI is one of the world's leading research institutes for the development of innovative telecommunications systems with optical data transmission. The upcoming 5G network deployment asks for flexible solutions regarding frequency spectrum, and there are considerations about implementing optical links for data backhauling. Since 2014, Fraunhofer HHI has pioneered the idea of a short-range optical wireless backhaul link through research in two European research projects (SODALES, 5G Crosshaul). Apart from backhauling, the newly developed LED backhaul® can be used as a flexible network, as a form of LAN extension if no cable is available. This is a conceivable solution for factories or subways, areas that are not easily reached by radio waves.

“One of Sangikyo’s new initiatives is the collaboration with Fraunhofer HHI. We have worked with Fraunhofer HHI to advance the joint development of high-speed wireless communication with LED light and have attained a realistic application. In future, LED backhaul® will be standardized by IEEE 802.15.13 and by international standardization activities of the Fraunhofer HHI,” says Yasukazu Sengoku, COO Sangikyo.

“We are developing the communication technologies of the future and are pleased that the new wireless system with LED light, which was brought to the market in cooperation with Sangikyo, will be used on the Japanese market. We will continue to work with Sangikyo and develop a wide range of high-speed wireless systems with LED light," says Prof. Ronald Freund, Head of the Photonic Networks and Systems department at the Fraunhofer HHI.

Optical wireless transmission is a future-oriented technology for fixed and mobile wireless optical communication over comparatively short distances. Possible applications are wireless backhaul and fronthaul for 5G, wireless communication for industry 4.0 as well as in indoor areas alongside WiFi and LTE, for instance in conference rooms.

Sangikyo is a company based in Yokohama, Japan, whose focus is to provide engineering services for its clients in the IT and telecom industry. For over 50 years, Sangikyo has successfully completed several projects in satellite communications, microwave communications and mobile communications both inside and outside Japan.