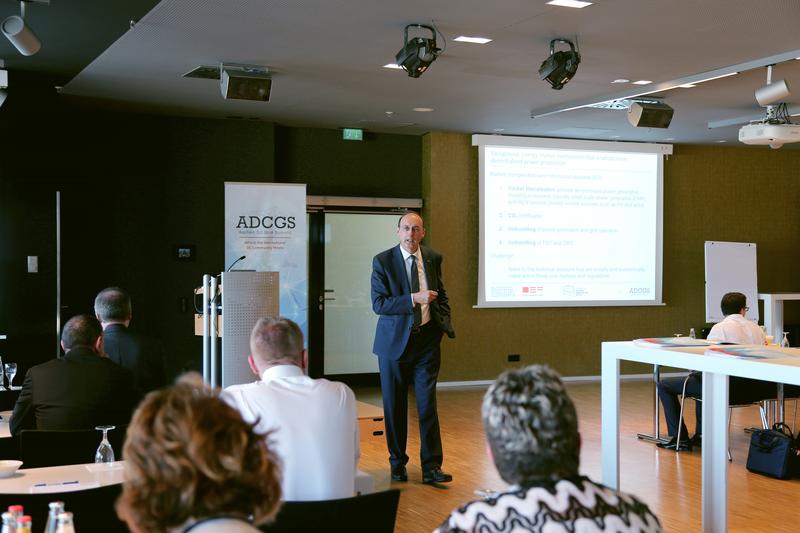 ”Where the International DC Community Meets” was the motto of the first Aachen DC Grid Sum-mit (ADCGS) which was held at the conference center of Aachen’s Tivoli Stadium. A key impulse for the conference, organized by FEN Research Campus, is the increasing importance of DC and its research in the context of our future energy supply system. As a result, energy systems based on both DC as well as the incorporation of renewable energies are supposed to make electric energy supply more reliable, sustainable and cost-efficient in the future.

During the two-day summit, 103 participants from research and industry had gathered to ex-change about the latest DC-related developments and results. Besides the predominantly European guests, coming from countries such as Germany, Switzerland, the United Kingdom, the Netherlands, France, Italy, Spain, Denmark, Finland and Romania, experts from as far away as Japan, Korea and the United States had come to participate in the event. More than 30 industry representatives, including renowned companies like ABB, E.ON, Siemens, Fuji Electrics, Mitsubishi, Hy-osung or thyssenkrupp, attended ADCGS as both speakers as well as  spectators. The science sector was represented by about 20 universities and research institutions, such as RWTH Aachen University, the Technical University of Berlin, the University of South Carolina, the Imperial College London as well as CESI, ENTSO-E and SuperGrid Institute.

Prof. Rik W. De Doncker, Director of FEN Research Campus, opened the first conference day with a speech, emphasizing once again the importance and advantages of DC grids in the context of energy transition as well as the equally important and increasing use of renewable energy sources. He also introduced the first medium-voltage direct current (MVDC) grid, which is under construction on the RWTH Aachen Campus Melaten since March 2018 in the framework of the “Research Campus – Public-Private Partnership for Innovation” initiative by the Federal Ministry of Education and Research.

The focus of the conference lay on two parallel sessions of presentations on the DC topic, each led by a Professor of RWTH Aachen University and topped off by interactive discussions between the speakers and the audience. The sessions on day one, led by Prof. Albert Moser and Prof. Antonello Monti, focused on technical topics such as grid planning, operation and automation, while featuring representatives from RWTH Aachen University, Siemens, Amprion, Westnetz as well as the University of Bologna and the University of South Carolina as speakers.

The second day started with a keynote by Prof. De Doncker, who also led that day’s technical session of presentations, followed by a second keynote by Aldo Danelli, Project Manager at CESI. The content of the parallel session on the topic “Business Models”, led by Prof. Eva-Maria Jakobs, had a less technical focus and took on a rather socio-economic perspective regarding the acceptance of innovative DC technologies. For both sessions on the final day, speakers from Mitsubishi, Hager, AixControl as well as EPFL Lausanne, the University of Stuttgart and the Technical University of Delft were obtained.

Besides attending the diverse sessions of presentations, participants also had the opportunity to look at an exhibition of posters that participants had submitted beforehand. To conclude the Aachen DC Grid Summit, Prof. De Doncker handed a “Best Poster Award” to the five best posters. The first place was taken by Lewis Hunter from the University of Strathclyde in Scotland. The second place went to SuperGrid Institute from France, followed by RWTH Aachen University which took the third place. Last but not least, the fourth place was shared by the Technical University of Berlin and RWTH Aachen University.

FEN Research Campus would like to thank all participants for the successful debut of the conference and all the positive responses. A second edition of the Aachen DC Grid Summit is planned to take place at the end of 2019.

FEN Research Campus is supported i.a. by the funding initiative “Research Campus – Public-Private Partnership for Innovation” of the Federal Ministry of Research and Education (BMBF).