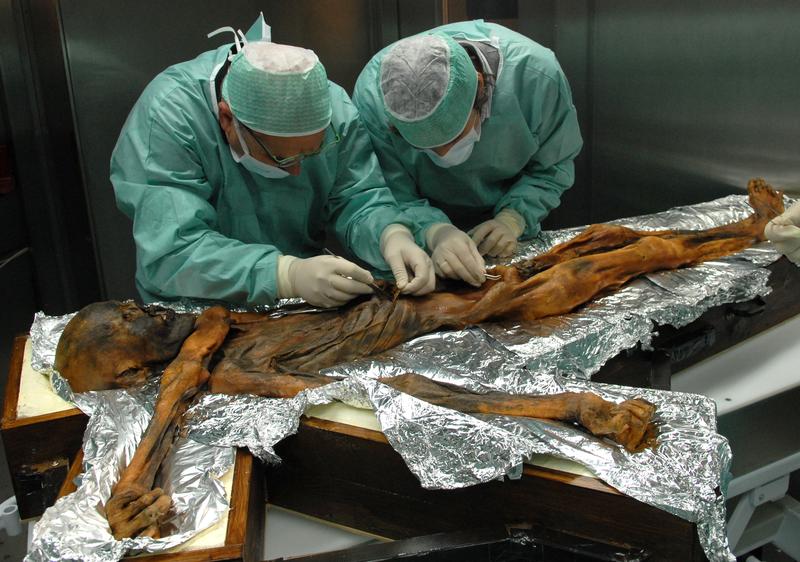 Mummy researchers from Eurac Research have analysed the stomach contents of the glacier mummy and reveal new insights into nutrition and food preparation from 5,300 years ago.Fresh or dried game meat from ibex and red deer, einkorn wheat and traces of toxic bracken: these were the ingredients of the Iceman’s last meal.

In an international study, led by researchers at the Eurac Research centre based in Bozen-Bolzano (Italy), scientists have examined the stomach contents of the glacier mummy for DNA, proteins, lipids and carbohydrates. Thanks to their findings, they were able for the first time to reconstruct what constituted a meal in the Copper Age. The results of this study were recently published in the renowned scientific journal “Current Biology”.

The Iceman, also known as Ötzi, must have felt very safe just before he met his untimely death. His last and copious meal was taken between half an hour and two hours before his demise. The scientists were particularly surprised by the high fat content of the food in the Iceman’s well-filled stomach: “Fat has very different characteristics from other substances as it is water repellent. This allowed us to spot the high fat content with the naked eye,” reports Frank Maixner, microbiologist at Eurac Research. Detailed analyses of the lipids present then revealed that this fat came from animal meat, more specifically from the fatty tissues of the ibex.

“Ötzi seems to have been aware of the fact that fats represent an excellent source of energy. The high-Alpine region (3,210 m) where the Iceman lived and was found some 5,300 years after his death, presents a definite challenge for human physiology. It calls for an optimal supply of nutrients so as to avoid a sudden drop in energy,” adds Maixner by way of explanation.

The detailed analysis of the stomach contents allows for conclusions as to how Copper Age man prepared his food: the ibex meat in the Iceman’s stomach was very well preserved. The researchers were able to see from the striated meat fibres that this was muscle meat and that it had been air-dried or minimally heated, presumably to preserve it. Meat fibres only retain their structure if cooking temperatures have been below 60 °C. Tests carried out by the researchers on game meat from extant species have confirmed this fact. After the meat had been roasted or boiled, the regular patterns in the meat disappeared.

As for the plant material found in his stomach, the scientists detected einkorn wheat in a non-milled form and traces of bracken. Einkorn wheat is one of the oldest types of domesticated grain which count as pre-cursors of modern wheat. The scientists were only able to conjecture how traces of toxic bracken ended up in the Iceman’s stomach: “Ötzi may have experienced stomach pains due to the parasites in his gut which have already been identified in previous studies, and had resorted to bracken as a remedy. It is also conceivable however that he had made use of the bracken leaves to wrap his food in and that traces of the plant inadvertently got into his food,” explains Albert Zink, director of the Institute for Mummy Studies at Eurac Research. Despite its toxicity, several indigenous peoples in Asia use bracken sprouts as a plant-based food.

“The Iceman’s last meal was a balanced mix of carbohydrates, proteins and lipids – perfectly suited to the demands of life in a high-Alpine region,” concludes Zink.