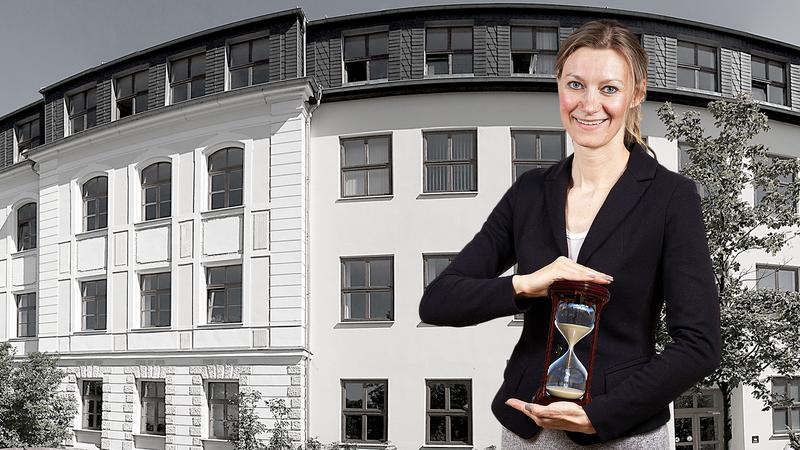 Who hasn’t had the feeling: while waiting, time barely seems to pass at all, but during a vacation the time just flies by far too quickly. Why do we perceive the passage of time so differently? Dr. Isabell Winkler, academic staff member of the Professorship of Research Methods and Evaluation at the Institute of Psychology at Chemnitz University of Technology, seeks to answer this question with her current research project. She studies our subjective sense of time. Primarily, she is investigating which factors influence our perception of the passage of time. Her study helps to explain well-known phenomena such as the feeling that the return trip is shorter than the path to reach a destination, or that time seems to pass more quickly as we get older.

“Neuropsychological research shows that there are multiple regions in our brains, connected via a system of loops, which are responsible for our sense of time,” explains Isabell Winkler. “Animals and small children are also able to perceive differences in the duration of stimuli. Therefore, we can assume that the perception of time is innate, or instinctive. But we need to learn the meaning of a short or long period of time, like counting or reading a clock.”

There are factors that influence our perception of time and can therefore lead to distortions. For example, distraction, emotional activation or physical exertion. Winkler explains, “When people have to wait and are unable to distract themselves, they perceive the elapsed time as quite long. These estimates are also usually more accurate, because they are concentrating on the passage of time. If an individual distracts themselves – either using the internet, watching videos or listening to music – then the time seems to pass more quickly.” In this situation, people tend to underestimate the actual duration, adds Winkler. Other factors play an important role particularly when people are asked to retrospectively estimate a time interval after a long time has passed. In that case, for instance, it makes a difference which events they remembered and how routinized their actions were.

Why Time Passes So Quickly in Adulthood

Routines and habitual actions are an important clue to answering the question of why children perceive the passage of time as slower than adults. Based on this phenomenon, Isabell Winkler studied factors that influence people’s sense of time. “There are a number of theories in the literature that attempt to explain this age effect, which makes time seem to pass more quickly as we grow older. But the results of the respective studies were inconsistent and even a bit paradoxical,” says Winkler. “The effect only emerged when participants rated the speed at which time elapsed in past periods of life. Generally speaking, we found no difference when we compared the sense of time passing in their current life period among participants in various age groups.” Therefore, the effect cannot be attributed to an actual difference in perception dependent on age, it rather is a memory phenomenon or recall effect. The effect of age on the perception of time emerges as a result of individuals comparing recreated time perception between various life periods. In order to resolve the inconsistencies in their results, the project group set two goals. First, they conducted tests to determine whether a comparison context was required for the age effect to occur, essentially the comparison between current time perception and perception in past life periods. Further, they set out to investigate potential causes of the age effect. More than 500 people between the ages of 20 and 80 were asked to describe their sense of time in current and past life periods. The result: consistent with earlier results, age had a significant effect when participants compared various life periods retrospectively.

Time researcher Winkler explains the effect: “There are several important factors which help explain this phenomenon. Over the course of our lives, we carry out more and more routinized actions and experience fewer novel events in life. Retrospectively, we reconstruct our perception of elapsed time based on the events we remember from a past time period. The more distinct events we remember, the longer we estimate a time period to have lasted. An increase in routines overall leads to fewer intense and consciously experienced events or actions. Therefore, in the same span of time, fewer different events or elements of an action are remembered and the duration is perceived to be shorter.” This helps to explain why people have the retrospective impression that time passed more quickly, although it may not feel that way in the actual situation. Naturally, children have more novel experiences and therefore presumably perceive more intensely and in greater detail. As a result, they remember the experience better and more vividly, which leads to a perception of the event lasting longer when they reconstruct the experience at later point in time.

Stress and Time Pressure Speed Up Our Sense of Time

Stress and time pressure to meet deadlines in adulthood also affect an individual’s sense of time. These factors can cause individuals to perceive events and actions less consciously, less mindfully, and in a less detailed way. Winkler reports, “Usually, we need to be doing multiple things at the same time and we can’t take the time to concentrate on individual details. Looking back, we often remember fewer elements of our experiences and perceive the time elapsed to be shorter.” Consequently, stress and time pressure seem to cause time to pass more quickly in retrospect. Even during stressful situations, time is perceived as passing more quickly, as people in stressful situations are often distracted from paying attention to the time elapsing.

Winkler cannot say exactly whether people’s sense of time has been impacted by digitalization and the corresponding effect of constant availability. However, she suspects as much. “Because of digitalization, there is the potential for more distraction and, conversely, there are hardly any idle moments that can force us to relax, unwind and be mindful.” Time could then be perceived as passing more quickly in the present moment as well as retrospectively. Trends intended to consciously counteract these effects have already begun to emerge, such as in the form of mindfulness courses or meditation. In order to make the “best” of your time, Isabell Winkler suggests spending time more mindfully. “Whenever your everyday life allows, disrupt your routines and create positive, lasting memories.” It can be especially helpful to consciously seek out and try novel experiences.

What About Boring Lectures?

But what to do when time simply seems to stand still during a lecture? Winkler explains, “From a purely hedonistic perspective, you could make time pass more quickly in boring lectures by distracting yourself. However, it would be more worthwhile to actively participate. Ask questions or take notes. If that doesn’t help, you could concentrate on yourself and your surroundings and try to experience everything mindfully. Your own body, your breath or the other people in the lecture hall and the speaker.” People can try out these techniques to determine the effect on their own subjective sense of time.

Background: The Difficulty With Comparison Studies

Comparison studies to examine the effects of increased global digitalization on the subjective perception of time are almost impossible to conduct. This is due to the fact that it is quite difficult to realistically manipulate the influence of digitalization on everyday life. In order to do so, people would need to be randomly assigned to situations with higher and lower degrees of digitalization in order to compare the effect on their sense of the passage of time. This kind of manipulation is not feasible in a laboratory setting, as digitalization affects all areas of a person’s life over a long period of time. If researchers were to carry out their studies with people who voluntarily live in a less digital world, the question would remain as to whether these individuals possess specific characteristics which could undermine a direct comparison with other individuals. Isabell Winkler posits that many people perceive a potential connection between ongoing digitalization and their sense of the passage of time, and that these individuals are working to counteract this.