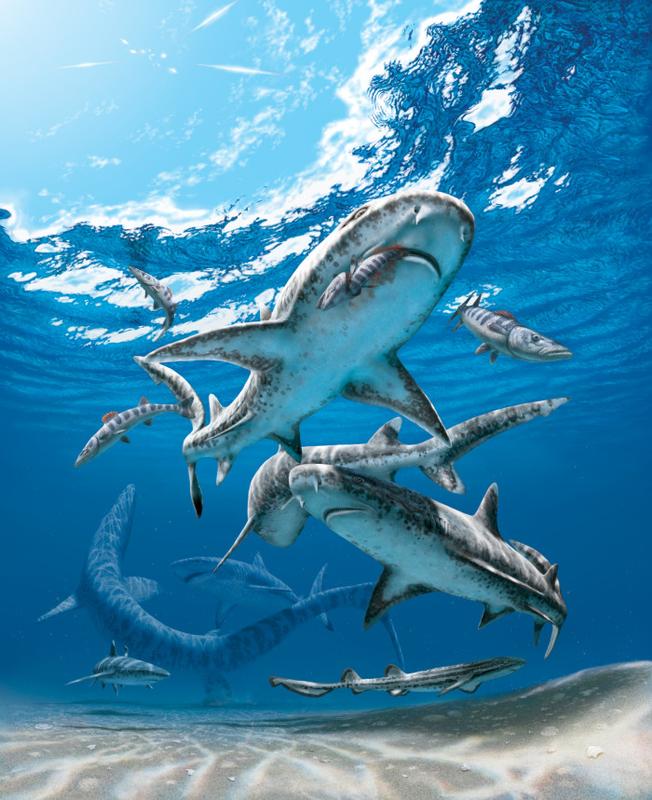 A study that examined the shape of hundreds of fossilized shark teeth suggests that modern shark biodiversity was triggered by the end-Cretaceous mass extinction event, about 66 million years ago.

As part of a larger scientific endeavour aiming to understand the diversity of fossil sharks, a group of researchers from Uppsala University, Sweden, and the University of New England, Australia, have explored how certain groups of sharks responded to the mass extinction that killed-off non-bird dinosaurs and marked the end of the Cretaceous period and the Mesozoic era.

Much like several other vertebrate groups during the Cretaceous (142–66 million years ago), shark diversity looked very different from today. Ground sharks (Carcharhiniformes) are the most diverse shark group living today, with over 200 different species. However, while dinosaurs dominated terrestrial environments during the Cretaceous, Mackerel sharks (Lamniformes) were the dominant shark forms of the sea.

“Our study found that the shift from lamniform- to carcharhiniform-dominated assemblages may well have been the result of the end-Cretaceous mass extinction,” said project leader and Uppsala doctoral student Mohamad Bazzi.
Sharks are one of the major groups that survived the Cretaceous–Palaeogene mass extinction and, today, carcharhiniforms are typified by forms such as the Tiger, Hammerhead, and Blacktip Reef sharks and lamniforms by the Great White and Mako sharks.

“Unlike other vertebrates, the cartilaginous skeletons of sharks do not easily fossilize and so our knowledge of these fishes is largely limited to the thousands of isolated teeth they shed throughout their lives,” says Bazzi. “Fortunately, shark teeth can tell us a lot about their biology, including information about diet, which can shed light on the mechanisms behind their extinction and survival.”

The team used “cutting-edge” analytical techniques to explore the variation of tooth shape in carcharhiniforms and lamniforms and measured diversity by calculating the range of morphological variation, also called disparity.

“Going into this study, we knew that sharks underwent important losses in species richness across the extinction.” said Dr. Nicolás Campione at the University of New England, who co-devised the project. “But to our surprise, we found virtually no change in disparity across this major transition. This suggests to us that species richness and disparity may have been decoupled across this interval.”

Despite this seemingly stable pattern, the study found that extinction and survival patterns were substantially more complex. Morphologically, there were differential responses to extinction between lamniform and carcharhiniform sharks, with evidence for a selective extinction of lamniforms and a subsequent proliferation of carcharhiniforms (the largest order of living sharks today) in the immediate aftermath of the extinction.
“Carcharhiniforms are the most common shark group today and it would seem that the initial steps towards this dominance started approximately 66 million years ago,” said Bazzi, who remarks that further research is still needed to understand the diversity patterns of other shark groups, along with the relationship between diet and tooth morphology.

Although the mechanisms that triggered such a shift in sharks can be difficult to interpret. The team hypothesises that changes in food availability may have played an important role. The end-Cretaceous extinction saw to major losses in marine reptiles and cephalopods (e.g. squids) and the post-extinction world saw the rise of bony fishes. In addition, it is likely that the loss of apex predators (such as lamniforms and marine reptiles) benefited mid-trophic sharks, a role fulfilled by many carcharhiniforms.
“By studying their teeth, we are able to get a glimpse at the lives of extinct sharks,” said Dr. Campione, “and by understanding the mechanisms that have shaped their evolution in the past, perhaps we can provide some insights into how to mitigate further losses in current ecosystems.”

Approximately 50% of the shark species in the IUCN are considered to be either endangered, threatened, or near-threatened.