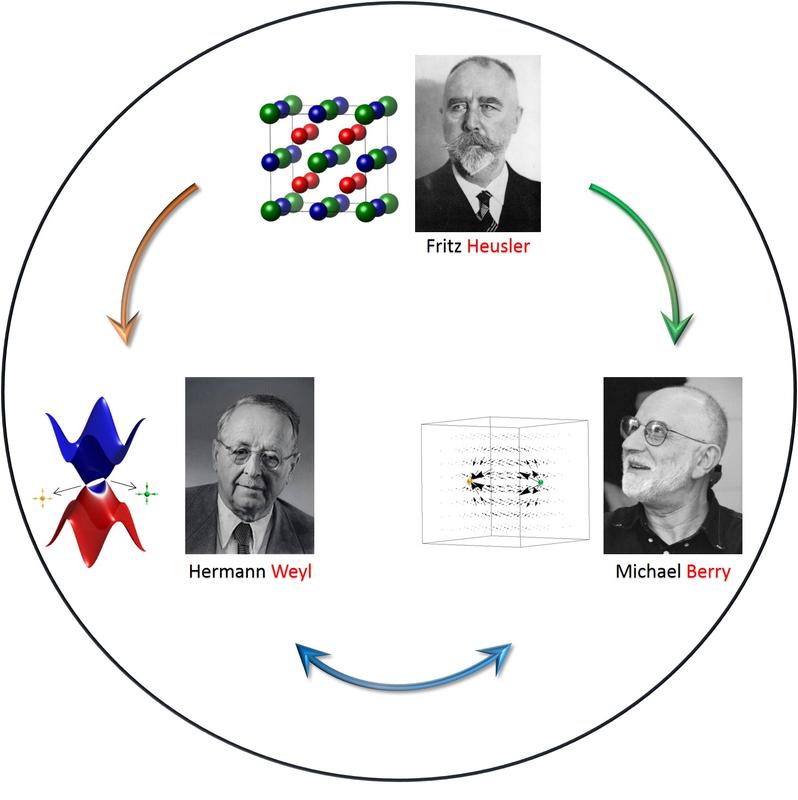 Scientists at the Max Planck Institute Chemical Physics of Solids have written a review paper about magnetic topological materials in the family of Heusler compounds. The review explains the connection between topology, symmetry and magnetism at a level suitable for undergraduate students in physics, chemistry and materials science with a basic knowledge of condensed matter physics.

Fritz Heusler (1866–1947), Hermann Weyl (1885–1955) and Michael Berry (1941–) are three renowned scientists whose work has led to new and important insights into materials science, topology and condensed-matter physics. These three fields of science have come together recently with the discovery of new and exciting quantum properties in new classes of material which could enable new science including computing technologies and catalysis.
Heusler is the name of the discoverer of mostly magnetic compounds that were of interest quite some time ago. But these compounds were recently found to host non-trivial topological properties that open a large field of novel physics. Hidden in the energy band structure of these materials are singular points that can be described with mathematical tools that originate from Weyl; these points are associated with the discovery of quasi-particles that are now called Weyl fermions. They are not found among the elementary particles of high energy physics, but we believe they exist in solid materials and determine their topology. The third name Berry stands for the measurable effects that reveal the physics at hand. Under certain well defined conditions there exists a vector field, similar to the magnetic field, called the Berry curvature. It determines the magnitude of a number of important effects, such as the anomalous Hall Effect and the Spin Hall Effect. It is the art of the experimentalist to suitably modify the materials in order to tune the Berry curvature and thus render the topology visible. In this review a great number of examples are given for various symmetry properties of Heusler compounds, a large class of materials that can easily be tuned to display ferromagnetic, antiferromagnetic, non-collinear or compensated magnetic order. These magnetic orderings give rise to pronounced electric and thermoelectric effects whose fingerprints are uncovered and explained including particle-like vortex spin structures, the antiskyrmions that are typical for a certain subset of Heusler compounds.
In the figure we show how the Weyl fermions and Berry phase are interconnected and in real system, we can realize them in Heusler family of compounds. In the top panel, we present a typical atomic arrangement of a full-Heusler alloy where the red and blue spheres are transition metals (like cobalt or iron), with red being more electropositive than blue, and the green sphere is a main group element (like silicon or Gallium). In the lower panel, the electronic structure of the Weyl semimetal is displayed. The yellow and bright green points present the magnetic monopoles in a chiral Weyl semimetal and the black arrows denote the Berry curvature in the momentum space.

Considering the large number of existing inorganic compounds and the recently proposed large number of nonmagnetic topological materials, Heusler compounds serve as a model system for the understanding and impact of magnetism on topology. Breaking time reversal symmetry via magnetism or an external magnetic field can lead to even larger effects than in non-magnetic materials based on the large separation between Weyl points of different chiralities. Based on a systematic study of Heusler materials we predict that there are a huge number of magnetic topological materials awaiting to be discovered.
With regard to applications, the large Nernst effect and classical and quantum Hall effects around room temperature based on the high Curie temperatures of Heusler compounds and their relatives have the potential to have great impact in energy conversion and quantum electronic devices for spintronics or quantum computing.

The research at the Max Planck Institute for Chemical Physics of Solids (MPI CPfS) in Dresden aims to discover and understand new materials with unusual properties.
In close cooperation, chemists and physicists (including chemists working on synthesis, experimentalists and theoreticians) use the most modern tools and methods to examine how the chemical composition and arrangement of atoms, as well as external forces, affect the magnetic, electronic and chemical properties of the compounds.
New quantum materials, physical phenomena and materials for energy conversion are the result of this interdisciplinary collaboration.
The MPI CPfS (www.cpfs.mpg.de) is part of the Max Planck Society and was founded in 1995 in Dresden. It consists of around 280 employees, of which about 180 are scientists, including 70 doctoral students.