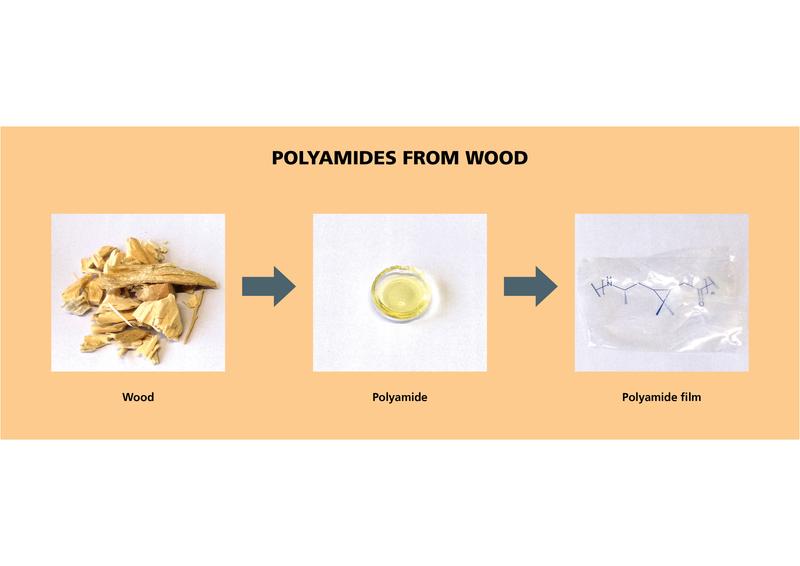 The natural substance 3-carene is a component of turpentine oil, a waste stream of the production of cellulose from wood. Up to now, this by-product has been incinerated for the most part. Fraunhofer researchers are using new catalytic processes to convert 3-carene into building blocks for biobased plastics. The new polyamides are not only transparent, but also have a high thermal stability.

Plastics are a useful alternative to glass or metal for a wide range of applications. Polyamides play an important role in the manufacture of high-quality structural components, as they are not only impact- and abrasion-resistant, but also resistant to many chemicals and solvents. Today, polyamides are mainly produced from crude oil.

The Fraunhofer Institute for Interfacial Engineering and Biotechnology IGB is investigating a sustainable alternative for the production of new high-performance plastics from terpenes found in resin-rich wood. The natural substances are available from conifers such as pine, larch or spruce. In the production of pulp, in which wood is broken down to separate the cellulose fibers, the terpenes are isolated in large quantities as a by-product, turpentine oil.

In the joint project “TerPa – Terpenes as building blocks for biobased polyamides”, researchers at the Straubing BioCat branch of Fraunhofer IGB have now succeeded in optimizing the synthesis of lactams from the terpene 3-carene and converting them into a scalable, competitive process on a potentially industrial scale. Lactams are building blocks for the production of polyamides. The Straubing experts could already show that terpenes such as α-pinene, limonene and 3-carene are suitable raw materials for the synthesis of biobased lactams.

The conversion of 3-carene to the corresponding lactam requires four successive chemical steps. The special feature of the patent pending Straubing solution is that the conversions can take place as a “one-pot reaction sequence” in a single reactor – purification of the intermediate products is not required. “We have achieved this by carefully selecting the catalysts and reaction conditions – and it saves time and money,” Paul Stockmann explains, who developed and optimized the promising process.
“Even on a laboratory scale, our process delivers more than 100 grams of diastereomerically pure lactam monomer per production run. This quantity is quite sufficient for initial investigations of the production and evaluation of the new plastics,” Stockmann said. Another advantage: No toxic or environmentally hazardous chemicals are required for the synthesis of the lactam.

Nevertheless, that is not all. Due to the special chemical structure of 3-carene, the side chains of the natural compound inhibit the crystallization of the resulting polymer (see info box). “Our biobased polymers are therefore predominantly ‘amorphous’ and thus transparent which is very unusual for biobased polyamides,” says Dr. Harald Strittmatter, who heads the project at the BioCat branch in Straubing. This makes the new polyamides suitable as protective shields, for example in visors or ski goggles. They can also be produced with considerably less energy input than petroleum-based transparent polyamides. In contrast to other bioplastics, which are mainly produced from corn, wheat or potato starch, biobased polyamides do not compete with food production. Rather, they add value to a waste stream that, so far, has been burned for energy production.

Another advantage: The new biobased polyamides also have excellent thermal properties. “The glass transition point of our polyamides is 110°C. They can therefore also be at permanently high temperatures, for example as components in the engine compartment of motor vehicles,” Strittmatter says. It is true that polyamides made from fossil ressources have similarly temperature properties. However, due to their aromatic domains – which do not occur in the 3-carene based polyamides – they discolor over time under the influence of UV light, limiting their potential for outdoor applications.

The scientists have also polymerized the biobased lactams with other commercially available monomer molecules – laurolactam (monomer of PA12) and caprolactam (monomer of PA6) – to form copolymers. The crystallinity and thus the transparency of the new copolymers were significantly modified. In principle, the application profiles of the widely used plastics PA12 and PA6 are potentially extended.

Following further optimization of monomer synthesis, colleagues at the Fraunhofer Institute for Environmental, Safety and Energy Technology UMSICHT in Oberhausen will transfer the process to the 20-liter pilot scale and produce larger sample quantities of lactams. The properties of the new polymers and copolymers will then be investigated in more detail to identify possible applications. The scientists also intend to study the biodegradability of the new polyamide. The Fraunhofer researchers hope that interested companies will then be able to transfer the results to industrial scale.

From April 2017 to March 2020 the joint project “TerPa – Terpenes as building blocks for biobased polyamides” is being funded by the Federal Ministry of Food and Agriculture via the Agency for Renewable Resources (FNR). The project, which is coordinated by Fraunhofer IGB, is being worked on together with Fraunhofer UMSICHT and supported by well-known industrial companies.

In crystalline polymers, the polymer chains are aligned in an orderly fashion. Incident light is scattered on the crystalline structures so that the plastics appear opaque or cloudy. If, on the other hand, the polymer chains are disordered, for example because the side chains interfere with each other, we speak of amorphous polymers. Incident light is not scattered; the polymers appear transparent.