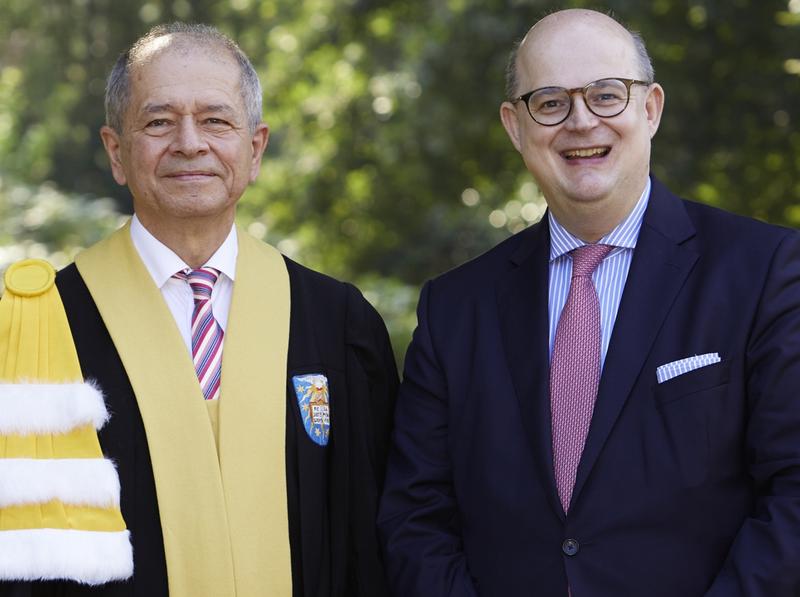 Jacobs University Bremen has started its new academic year with a clear message of respect. In front of more than 500 students, professors, staff members and guests, University President Prof. Dr. Michael Hülsmann took a stand against intolerance, nationalism, xenophobia and exclusion on the occasion of the right-wing extremist riots in Chemnitz. Hülsmann, who originally wanted to talk about the role of science and universities at the opening ceremony of the new academic year, changed his speech at short notice.

“In the light of the recent developments in Germany as well as in many other nations in Europe and further parts of the world no one can stay back and hibernate in privacy. Hence, I feel forced and obliged to address a different topic: Respect!" According to Hülsmann, global challenges can only be mastered through global cooperation, not through retreating to nationalself-interest: “Diversity is a benefit, tolerance an added value.”

Hülsmann described mutual respect as the only attitude that makes it possible to cooperate with other people. “And that is what is Jacobs University is all about”, emphasized the president of the English-medium university whose students come from more than hundred nations. “In our community, we are aware of cultural differences and mutually pay attention to the needs of members of other nations or another gender. We recognize that our individual cultural framework leads us to do something in a certain way and we talk to each other about why we are doing it the way we do it,” Hülsmann stated.

Jacobs University combines two educational concepts in one organization, emphasized its new chairman of the Board of Governors Prof. Dr. Antonio Loprieno, President of the All European Academies (ALLEA): education in the sense of a comprehensive understanding of the world and education in the sense of profound expertise in a certain field of knowledge. “Within the European academic landscape, our university displays the almost unique feature of being a campus university, thus following the tradition of the English or American colleges from Oxford to Harvard.” In his speech, Loprieno also warned against the loss of trust in science: “It is a paradox of our digital age: more students and people involved in education, but also more fake news and distrust in science. In the times of most rapid progress in nanotechnology or personalized medicine, one of the most powerful leaders of our planet does not believe that there is such a thing called climate change.” Loprieno therefore called on the new students to become leaders of a new era of digital enlightenment. “This is an important task ahead of you, one that your time at Jacobs University will ideally prepare you to fulfill.”

Christian Weber, President of Bremen’s State Parliament, welcomed the new students to Jacobs University as well. “It is an honor to us that you have decided to come to our city," emphasized Weber in his greeting message. According to Weber, the highly international Jacobs University fits very well to Bremen as a cosmopolitan city, and he encouraged the students to explore and discover the diversity of Bremen.
Juliana Nair, Vice President of Jacobs University’s Graduate Student Association, recalled her first days at Jacobs University: “Exactly a year ago I was sitting here; O-week had ended and many questions and doubts went through my mind.” But the young Indian's worries quickly vanished: “Here at Jacobs, you meet people from everywhere! There’s so much more to learn not just academically but culturally as well”, said Nair, who also described the intensive support provided by professors as a big plus for Jacobs University.

“You will go through a major transition”, emphasized Science communicator Hashem Al-Ghaili. He graduated from Jacobs University back in 2013 and became a social media star with his "Science Nature Page", which is followed by almost 29 million people on Facebook alone. “You will face challenges, and these challenges will be a test of your strength.” Overcoming them and believing in one’s own goals is important according to Al-Ghaili, who described the atmosphere of mutual help and support as an important benefit of Jacobs University.

Musically accompanied by the university choir J-Cappella and the rock band "Faculty Noise", which was formed by Jacobs professors the start of the new academic year marked the beginning of a new tradition: on stage, President Hülsmann presented the "Book of Learning", which will be signed by all professors, lecturers and new students - as a joint commitment to ambitions, rules and values of academic and social coexistence.

About Jacobs University Bremen:
Studying in an international community. Obtaining a qualification to work on responsible tasks in a digitized and globalized society. Learning, researching and teaching across academic disciplines and countries. Strengthening people and markets with innovative solutions and advanced training programs. This is what Jacobs University Bremen stands for. Established as a private, English-medium campus university in Germany in 2001, it is continuously achieving top results in national and international university rankings. Its almost 1,400 students come from more than 100 countries with around 80% having relocated to Germany for their studies. Jacobs University’s research projects are funded by the German Research Foundation or the European Research Council as well as by globally leading companies.
For more information: https://www.jacobs-university.de
https://www.facebook.com/jacobs.university
https://www.youtube.com/user/JacobsUni
https://twitter.com/jacobs_bremen
https://www.instagram.com/jacobsuniversity/
https://www.weibo.com/jacobsuniversity