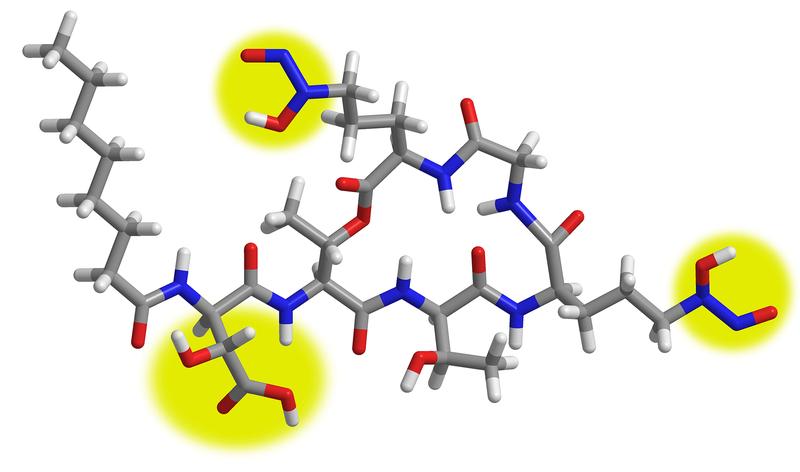 A model of the molecule gramibactin. Possible binding sites for iron are highlighted in yellow. | Quelle: Ron Hermenau / Leibniz-HKI 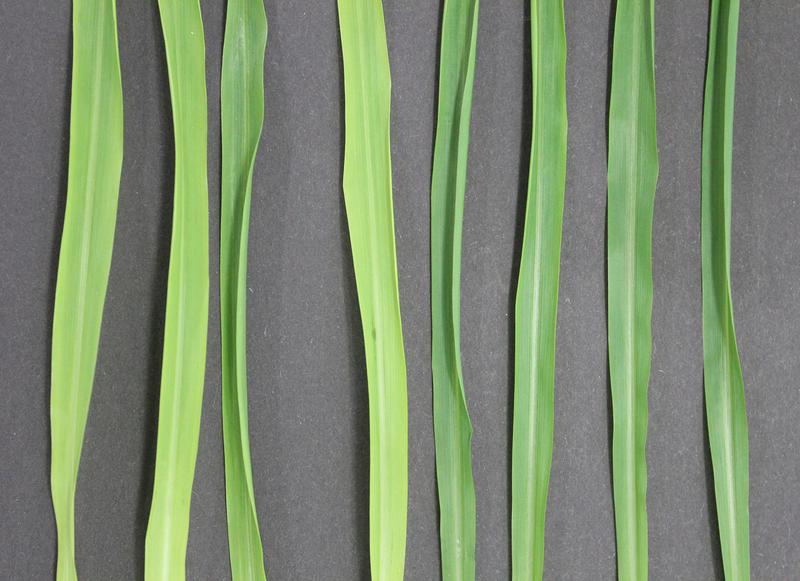 Jena. A research team from Jena has discovered a new siderophore ("iron carrier"). The molecule called gramibactin is produced by bacteria that live in the root area of maize and wheat. It binds to iron from the environment that is otherwise mostly insoluble in water and targets it into the bacterial metabolism. The grain plants benefit from this because they can absorb the iron that is mobilised by the bacteria and form more chlorophyll. Gramibactin binds iron in a way not previously observed in nature. The study is published in the journal Nature Chemical Biology and highlights the complex interaction of the root microbiome with the host plant and its implications for future food security.

Christian Hertweck and his team of scientists found evidence of a novel iron uptake system in the genome of the bacterium Paraburkholderia graminis. The researchers isolated a ring-shaped molecule that belongs to the family of lipodepsipeptides and named it gramibactin because the bacteria that produce it are associated with the roots of sweet grasses – the Gramineae.

Gramibactin fixes iron (III) ions with a very high affinity through two unusual N-nitrosohydroxylamine groups that protrude from the ring structure. This has not previously been observed in natural iron transporter molecules and therefore makes gramibactin the first representative of an entirely new class of siderophores.

The researchers tested whether gramibactin can actually improve the iron supply of plants in the vicinity of which it occurs, using the production of chlorophyll as a read-out. Chlorophyll is the green pigment that is required for photosynthesis and it can only be synthesized if sufficient iron is present. The team was able to demonstrate that corn plants produced up to 50 % more chlorophyll on exposure to the gramibactin-iron complex.

These results show that iron provided through bacterial activities can have a beneficial effect on plant growth. These insights might be important because maize and wheat are two of the most important cereals for global food production. A balanced and natural colonisation of the plant root area with microorganisms – the so-called root microbiome – is an essential factor for plant growth and high crop yields.

"It is always fascinating to see the different ways in which chemical problems are solved in nature", says Hertweck and adds: "We hope that our findings will contribute to improving the fitness and health of these important crops in a natural way.”

The authors of the study work in the Collaborative Research Centre ChemBioSys. This program is funded by the German Research Foundation (DFG) and includes scientists from the Friedrich Schiller University, the Leibniz Institute for Natural Product Research and Infection Biology and other institutions that work together to elucidate signalling pathways in complex biological communities. Often several species are involved in the synthesis of substances or benefit from them in different ways. Research into such multi-partner systems and the mechanisms that stabilize them is a major research focus in Jena.

In the Collaborative Research Centre (CRC) ChemBioSys, biologists, chemists and physicists jointly investigate fundamental control mechanisms in complex biological systems that influence our daily lives. They study representative biosystems with bacteria, fungi, microalgae, plants, animals and human cells in increasing complexity. New molecules are being researched and strategies are being tested to influence the composition of biological communities. Scientists from the Friedrich Schiller University Jena, the Leibniz Institute for Natural Product Research and Infection Biology and the Max Planck Institute for Chemical Ecology are involved in the CRC ChemBioSys. The program is funded by the German Research Foundation (DFG).