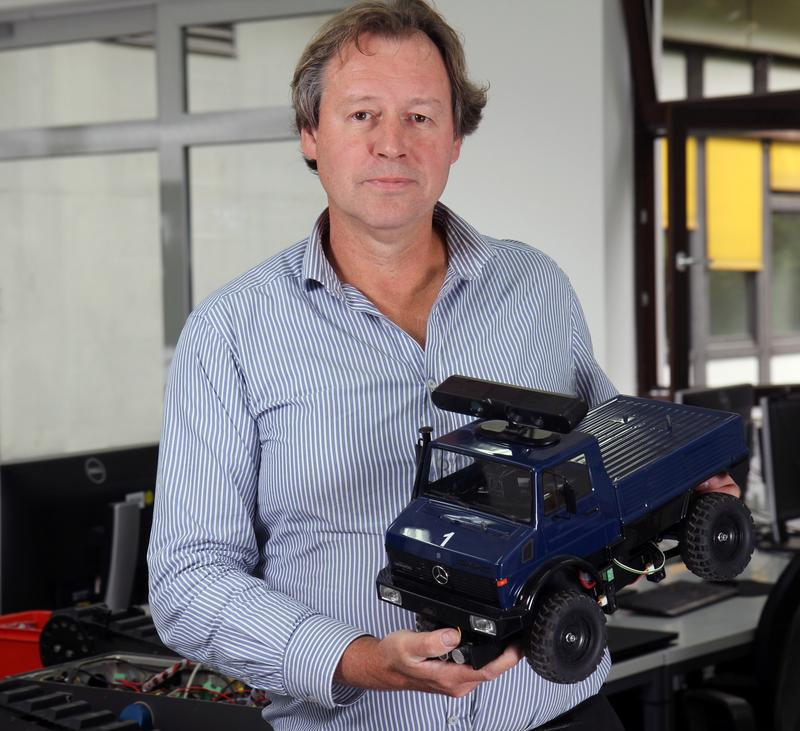 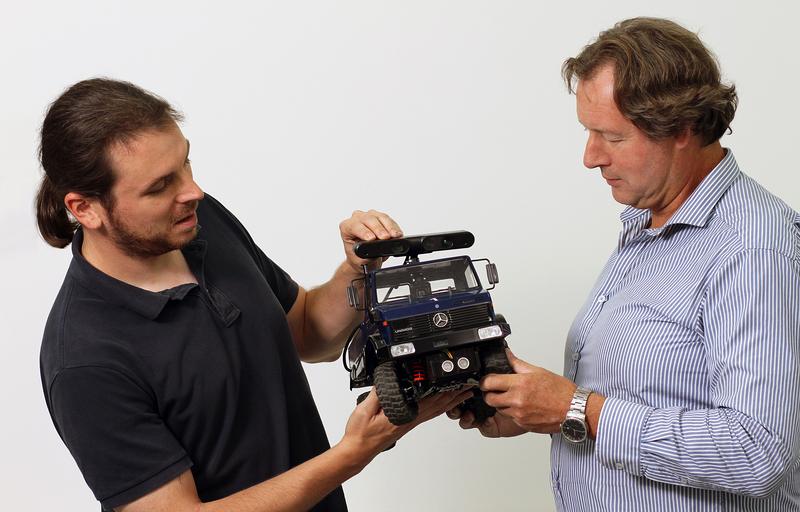 Before autonomous vehicles are tested on the road or off-road, researchers usually first check their systems in the laboratory. In addition to computer simulations, computer scientists at the Technische Universität Kaiserslautern (TUK) also use small models of the all-terrain Unimog commercial vehicle from the automobile manufacturer Daimler. They are equipped with sensor, measurement, and camera systems and can thus explore their surroundings autonomously.

At the International Motor Show (IAA) Commercial Vehicles in Hanover from 20 to 27 September, researchers will be presenting the model vehicles at the research stand (Hall 13, Stand A28) of the Centre for Commercial Vehicle Technology (ZNT).

A multitude of technology is hidden in the small blue model vehicles: The computer scientists around Professor Dr Karsten Berns have removed the original remote control. "We have replaced it by a microcomputer that controls the motor and speed controller," says Berns, who heads the Robotics Research Lab at the TUK and conducts research at the Centre for Commercial Vehicle Technology (ZNT).

The roof is equipped with a special camera that detects structures in the surrounding area. Another camera is located in the driver's cab. “The two camera systems provide the minicomputer with colour samples and 3D images,” continues Berns. “With this data, it assembles an image of the surroundings and identifies the direction the vehicle must take.” Further sensor and measuring systems are necessary so that the Unimogs can drive autonomously: On both sides they are equipped with infrared sensors and on the front and back side with ultrasonic sensors. “This makes it possible, for example, to measure the distance to a possible obstacle such as a wall,” says doctoral student Steffen Hemer. In addition, the vehicles are equipped with speed and acceleration sensors. The computer scientists have equipped a total of four of these Unimog models with their technology.

Berns and his team are researching the next generation of commercial vehicles on the TUK campus - from drum rollers that drive autonomously in the convoy and compact a new road surface, to cranes that unload their loads themselves while “keeping a very close eye” on their surroundings, to excavators that independently load trucks with sand. But before the vehicles are tested on roads, fields, forests, and meadows, the computer scientists check their sensor, measurement, and camera systems used in their techniques in simulations and with the help of models.

The Kaiserslautern computer scientists develop their autonomous vehicles in such a way that they should be able to decide for themselves which route they take, i.e. to decide, for example, to avoid an obstacle or to drive over it if it is a larger stone or a small branch on the forest floor.

The Unimog models are also used in advanced internships during the computer science bachelor studies to teach the handling of complex algorithms.

At the IAA Commercial Vehicles in Hanover, the scientists will present their work at the ZNT research stand. They have a small model vehicle with them.
Further information is available at http://agrosy.informatik.uni-kl.de/roboter/rcunimog/

The Centre for Commercial Vehicle Technology at the TU Kaiserslautern
At the Centre for Commercial Vehicle Technology (ZNT), more than 150 researchers from more than 13 faculties of computer science, electrical engineering, information technology and mechanical engineering work together on an interdisciplinary basis. For example, they develop techniques for autonomous driving and computing methods that ensure that the technologies in the vehicles function reliably. They are also working on intelligently networked vehicles and investigating how people and vehicles will interact with each other in the future. Another area of research is increasing energy and CO2 efficiency through lightweight construction, alternative fuels, hybridization and electromobility. The ZNT is part of the Commercial Vehicle Alliance Kaiserslautern (CVA) and cooperates with many of the research institutes located in the proximity of the university campus. The ZNT is also characterised by close cooperation with commercial vehicle manufacturers and suppliers. Read more at www.uni-kl.de/znt