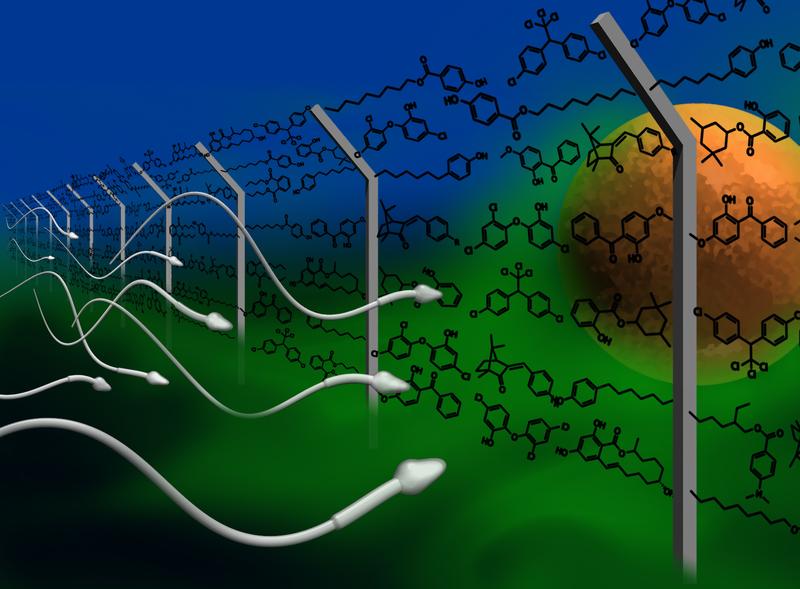 Endocrine disrupting chemicals might be involved in fertility disorders for they impair the function of human sperm. Scientists from Germany and Denmark have now taken another, closer look at the chemical´s action in sperm; in particular, at the so-called cocktail effect. The results: If the chemicals teams up, their individual actions do not simply add up, but amplify each other.

Endocrine disrupting chemicals, omnipresent in food, plastics, textiles, and cosmetics, might be involved in fertility disorders, which are on the rise in the Western world. The chemicals impair the function of human sperm. They mimic the action of female hormones that control the swimming behavior of the sperm in the oviduct. Thereby, the chemicals could interfere with the fertilization process. Scientists around Prof. Timo Strünker from the Centre of Reproductive Medicine and Andrology (CeRA, University of Münster, Germany) and Prof. Niels Erik Skakkebæk from the Rigshospitalet, Copenhagen (Denmark) have now taken another, closer look at the chemical´s action in sperm; in particular, at the so-called cocktail effect.

In our daily life, we incorporate a complex mixture of various endocrine disruptors - each individual chemical, however, only in a very low, rather ineffective concentration. Despite the miniscule concentrations of the individual components, cocktails of endocrine disruptors, such as those found in blood, have a pronounced action in sperm. "The results of our new study can be easily summarized," says Dr. Christoph Brenker from the CeRA, head of the study: "If the chemicals teams up in cocktails, their individual actions do not simply add up, but amplify each other.

Whether the use of endocrine disrupting chemicals should be further restricted is a much debated question. The new results are important for assessing their toxic action: so far, "safety limits" are determined only for each chemical individually. Considering that in cocktails, the actions of individual chemicals become amplified, such an isolated risk assessment is prone to underestimate the risk potential of endocrine disrupters. In fact, synergistic actions of endocrine disruptors have also been observed in other cells and tissues.